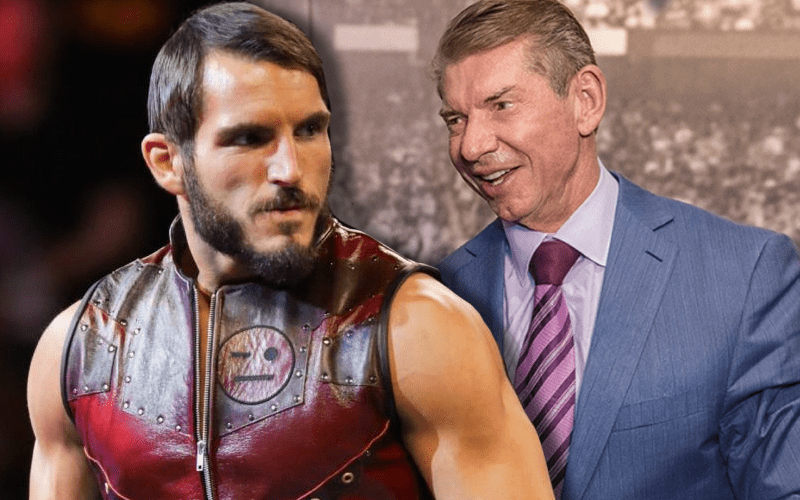 Vince McMahon is a man shrouded in a lot of legends about his name. Meeting him can be a pretty surreal experience, especially for someone who wants to work for him.

While speaking to Chasing Glory, Johnny Gargano talked about his first call from WWE that he actually missed because his phone was on vibrate. It’s a good thing his mother was home when they called the house.

Then Gargano met Vince McMahon and described this experience meeting The Chairman in his “villain chair.”

“That first time being there was crazy too. I got a call at like 5 pm, but I was asleep so didn’t hear it. I woke up to my mom running down the steps because my phone was on vibrate, saying Johnny, Johnny, they called the house, you’re going to be on SmackDown. I head down to The Gund Arena and I don’t know where to go. Eventually, I get my producer and he introduces me to MVP and we talk a little bit and then they said that they are going to take me to the wardrobe area. I said that it is weird because I have my own gear, I don’t need anything. They take me to the wardrobe area and they said to me here is my gear and it’s an elf costume. They tell me my name is Cedrick Von Haussen. I didn’t even go to the locker room either. I’m changing in the makeup area and all these girls are looking at me like what the heck is this guy doing? They then took me in to see Vince McMahon.”

“We walk into Vince McMahon’s office and it’s like a movie, Vince is like in a villain chair with his back turned and all of a sudden the chair turns around, he has a newspaper up and slowly lowers it and there he is and he looks at me and says, you look, good kid. Thank you for doing this and I said, thank you, sir and I left. The show starts, and for some reason, this part is the most I remember from that moment, Steve Austin had a movie coming out, I think it was The Condemned, so there was a trailer playing before my match and I was standing in Gorilla watching The Condemned trailer with Stephanie and Vince McMahon.”

“I’m thinking how freaking weird it is, and so I go out and do my thing, I get a bloody nose because he [MVP] kicked me really hard, but I came to the back and Vince and Stephanie say that I did a great job.”

Johnny Gargano will be a driving force as NXT invades the USA Network tonight. It’s all happening at once for NXT, but it took a lot of work. One person who understands just how much effort it took was Johnny Gargano.