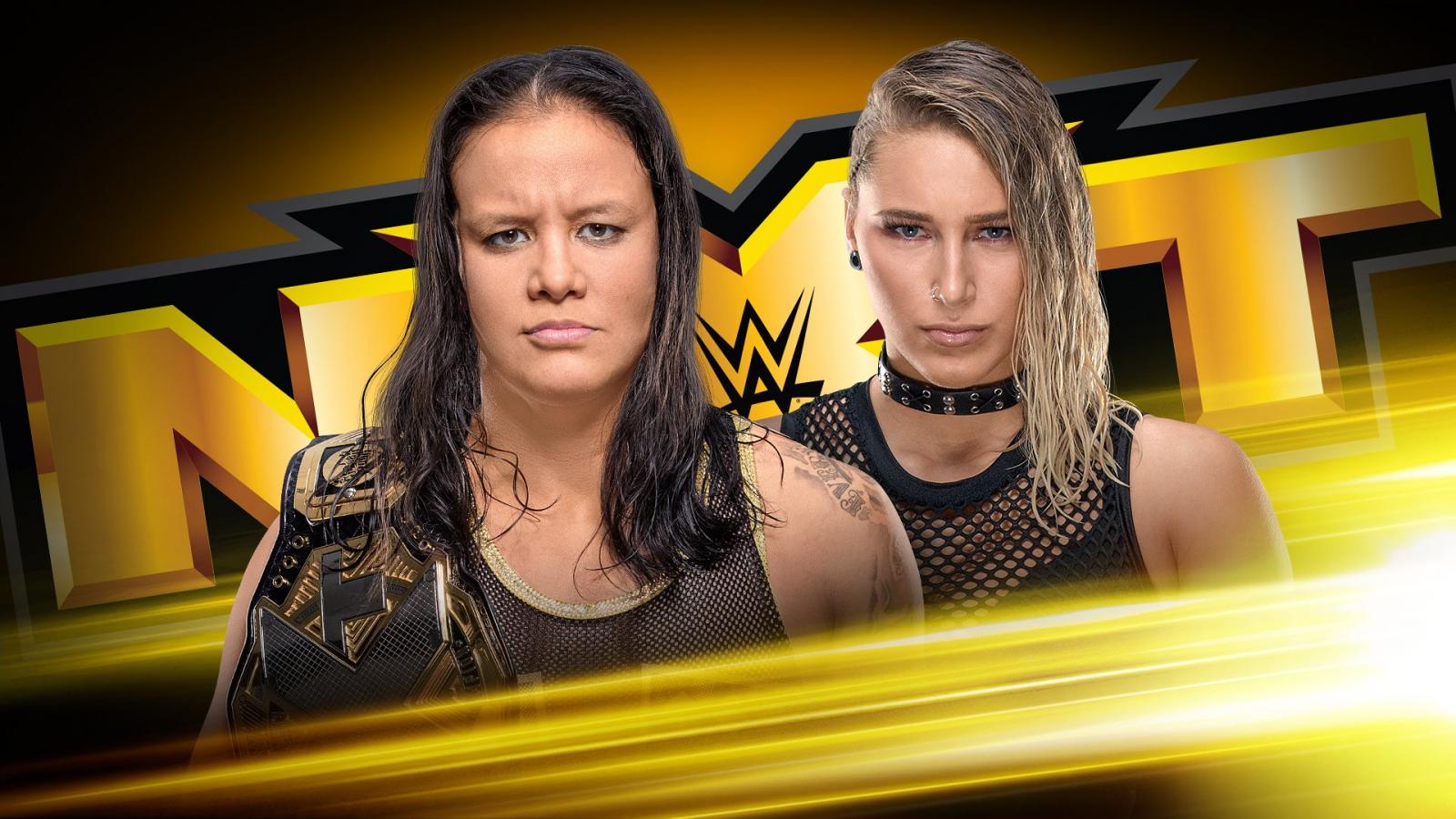 Welcome to Ringside News’ coverage of WWE NXT. Please keep refreshing throughout the show for constant updates once it kicks off at 8:00 PM EST

After last week’s packed edition of NXT ended with the explosive Jordan Myles and Adam Cole championship match, this week’s episode is riding high on momentum. Tonight, the women’s division seems to be the main focus, as Candice LaRae may seek retribution against Io Shirai after being attacked from behind last week.

Though GM William Regal left her out of the Triple Treat Number #1 Contender’s Match scheduled for NXT’s debut on the USA Network, Rhea Ripley will also go one on one with Shayna Baszler in the main event. Will Rhea overcome Shayna’s streak of dominance and get her name added to the title picture?

Back in on the men’s side, Cameron Grimes looks to get back into winning ways as he faces Raul Mendoza, and The BruiserWeight Pete Dunne returns to NXT action against NXT Breakout Tournament star Angel Garza.

Finally, Johnny Gargano is set to address his future in NXT. Gargano was called out recently by Shane Thorne, but he has not been seen since NXT TakeOver: Toronto, which was over a month ago. Thorne will likely have something to say about Gargano’s future, so look for him to make an appearance tonight during Gargano’s address.

Will NXT make a memorable impression on fans, one week before the brand’s USA Network debut? We’ll see, as we will begin coverage when the show starts at 8:00 PM EST!

Rhea Ripley arrives in the parking lot and makes her way into the Full Sail arena through the main entrance.

Preist goes right after Boa, but Boa is able to slightly outspeed Preist. The Archer of Infamy’s confidence is unshaken by any offense that Boa mounts and Preist quickly grounds Boa, ending a flurry of offense with a falcon arrow.

Boa’s agility and strong kicks put him back on offense, but Priest grounds Boa quickly with a lariat, finally taking Boa out with The Reckoning for the 3 count victory.

Gargano comes out to the ring in his street clothes with a new t-shirt and a new entrance video. The crowd goes nuts for him, and he soaks up the adulation. A “Johnny Wrestling” chant starts before Gargano can speak, and it lasts a very long time.

Gargano finally begins to speak. He says that everyone has been asking him what the future holds for Johnny Gargano. He appreciates the thanks that he gets from the fans and returns the thanks, saying that he loves NXT. In what feels like a dig at AEW, Gargano says that he and the NXT locker room put on the best professional wrestling show that the world has to offer.

Gargano says that he has made a decision about whether to leave NXT or stay, but, before he can say what that decision is, Shane Thorne interrupts him. Thorne can barely be heard through all of the booing, and is visibly irritated by the “Johnny Wrestling” chants.

Thorne says that he understands that Johnny is a pillar of NXT, but NXT will be fine without him, and even better with “the right person in the spotlight.” He tells Johnny to “take a bow and take a walk.” Gargano looks like he is about to leave the ring, but he stops himself, saying that he isn’t going anywhere.

Gargano lays out Shane Thorne with a superkick, then writes “NXT” in the air (reminiscent of Bret Hart writing “WCW” in the air before leaving WWE), ending it with a “4 Life” hand symbol.

Garza tries to play mind games with Dunne, but Dunne takes him down and works on joint manipulation. Dunne has taken a majority of the offense, dissecting Garza with his signature joint play.

Garza shows some formidable technique, but the two end up on even footing. After both men run the ropes for a considerable amount of time, Dunne lays out Garza with a clothesline and goes back into joint manipulation. Garza catches Dunne in the ropes and lays Dunne out with a kick outside of the ring. Dunne gets back into the ring at the count of 6.

Garza confidently takes control, but Dunne is able to take things back with strikes, an enziguri, and a release German Suplex. Dunne stomps on Garza’s hands and gets a 2 count. Garza plants a well-placed dropkick on Dunne, but Dunne reverses whatever move Garza was going for with a sit-out powerbomb for another 2 count.

Garza catches Dunne with a rollup for a 2 count. Dunne goes for a top rope maneuver, but Garza crotches him and then dropkicks Dunne’s thighs, getting another 2 count. Garza kicks Dunne in the face for a very near 2 count.

Garza goes on offense with strikes, and Dunne seems vulnerable, but Dunne goes back on the attack with stomps, kicks, and chops. Garza goes for a moonsault, but Dunne catches him into a triangle hold while also bending Garza’s fingers, and Garza quickly taps out.

Rhea Ripley is backstage, pacing and stretching in preparation for her match with Baszler. Baszler is then shown shadowboxing and warming up herself.

The Street Profits appear in a skit from Central Park, hyping up the Madison Square Garden edition of Monday Night RAW. Angelo Dawkins says that they are missing the tag team titles, and Montez Ford says that they should show up on the NXT USA Network debut to take the NXT Tag Titles back.

Grimes comes out to the ring with a brown vest and black top hat. Mendoza goes on the quick offense, rolling Grimes around for a 2 count pinfall. Mendoza’s speed seems to be too much for the bigger man, Mendoza went for some sort of springboard attack, but Grimes shut him down, catching him with a dropkick.

Grimes manipulates Mendoza’s left arm, grounding him. Mendoza fights back from underneath, dropping Grimes with an enziguri. Mendoza goes to the top rope and walks the ropes, hitting Grimes with a dropkick, and follows that up with a running shooting star press and a 2 count.

Mendoza’s ability and acrobatics keep him one step ahead of Grimes, until Mendoza goes for a top rope maneuver and Grimes avoids it, taking Mendoza down with a leaping double stomp and a 3 count victory.

William Regal is in his office when Candice LaRae confronts him about why he keeps rewarding Io for attacking Candice. Regal responds by adding LeRae to the Triple Threat Match next week, making it a Fatal Four Way, then ponders the idea that the match could be a five-way match if Rhea Ripley beats Shayna Baszler. Candice says that, as long as she can get her hands on Io, she does not care who else gets added to the match.

Dakota Kai gets a video package, hyping her NXT return.

Next week: Matt Riddle and Killian Dain will face off in a street fight. Also, a reminder that Velveteen Dream will defend his NXT North American Championship against Roderick Strong on the same episode of NXT on USA.

Rhea Ripley chants echo early on in the match. Shayna tries to trip Ripley early on, but Ripley is able to reverse it and trip Shayna. Ripley is able to go on the offense against Baszler, out-powering her. Ripley continues to dismantle The Queen of Spades with stomps, kicks, and strikes.

Ripley goes for a suplex, but Shayna reverses it into a rollup pin for a 2 count. Baszler is able to trap Rhea Ripley in the ropes, taking advantage of it and taking control back during the match. Baszler locks in a Kirifuda Clutch from the top rope, but is forced to let go and the action goes out to the ring.

Ripley gets Shayna in an electric chair position and drops her onto the steel steps. Rhea rolls Shayna back into the ring, but Jessamyn Duke and Marina Shafir run interference. They try and slip a steel chair to Shayna, but Rhea Ripley gets the chair away from her and hits Shayna with the steel chair, disqualifying herself.