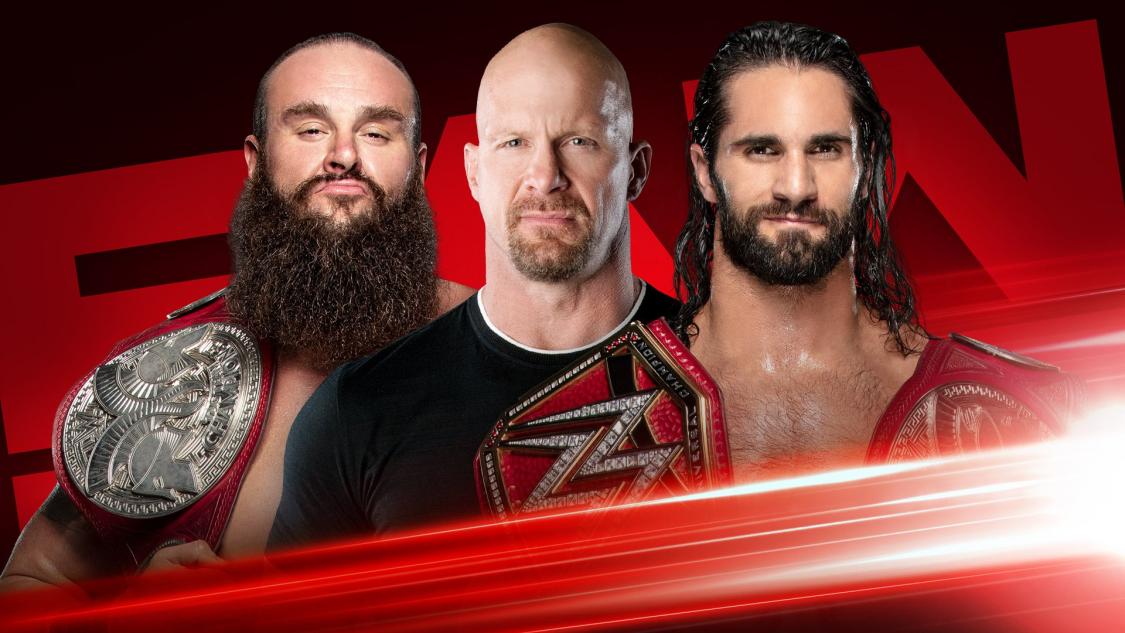 We’re back live and the Raw Women’s Champion, Becky Lynch makes her way to the ring. Charlotte Flair, her partner, is out next for tag team action. We see a lengthy video hyping this feud.

Before the match can begin Becky and Charlotte leave the ring and attack Sasha and Bayley on the ramp. The four of them brawl at ringside, with Becky hitting Sasha with a Bexploder on the floor. Lynch gets Sasha in the ring and unloads on her but Bayley comes in and attacks Lynch. Finally Charlotte comes back with a chair and clears the ring. The match will begin after the break.

We return to see the match get underway with Becky Lynch and Sasha Banks. Lynch puts the pressure on Sasha but the latter makes the tag to Bayley. Again Lynch puts the pressure on and beats her in the corner, then tries to force Bayley to tag Sasha, but Banks gets off the apron. Becky tosses Bayley from the ring and slams her into the barricade repeatedly, while Banks watches on.

Back inside the ring, and Flair tags into the fray. The Queen stomps on Bayley. Banks tags in and kicks Flair down in the corner before choking her with her boot. Bayley tags in again and Charlotte sends her into the corner where Becky tags in. Lynch stops Bayley before delivering a springboard kick. Becky looks for the Bexploder but Bayley elbows her. Becky is distracted by Sasha and gets kicked from the ring.

Flair tags in and floors Banks repeatedly with clotheslines and chops. She hits Sasha with a fallaway slam, then kips-up and kicks Bayley from the apron. Flair hits Sasha with a reverse STO into the turnbuckles, followed by a neckbreaker for a two count. Banks counters Flair and locks-in the Bank Statement. Charlotte is able to roll-out and apply the Figure Eight. Bayley runs into make the save but Lynch grabs her and tries to put on the Dis-Arm-Her but Bayley throws her into Flair and Banks. All four women are down. Charlotte rolls from the ring and Banks hits her with a Meteora from the apron.

Back live and Charlotte fights Banks off but gets hit with double knees in the corner. Bayley tags in and delivers some chops but Flair fires back with a right hand. Tag is made to Lynch, who floors Bayley and knocks Sasha from the apron. Becky lands some kicks, followed by a shoulder tackle.

Banks comes in and gets hit by a Bexploder, followed by a baseball slide. Becky hits Banks with a right hand from the apron, then gets back in the ring. Bayley looks for her finish but Becky reverses into the Dis-Arm-Her. Banks comes in and hits Becky with the Bank Statement, prompting Charlotte to hit her with a big boot. Bayley then attacks Charlotte. She and Sasha look to his a double suplex to Flair but she lands on her feet, then ducks and Lynch comes off the top rope with a missile dropkick to both women.

Lynch drags Bayley to the corner, tags Flair, then hits a leg-drop from the middle rope. Flair takes to the top rope and hits a moonsault to Bayley but Sasha breaks the pin attempt. The action spills out of the ring, where Becky slams Sasha into the steps, then gets her in the Dis-Arm-Her on the floor. Bayley kicks Becky off, then hits Flair with a German suplex on the floor and all four women are down.

Bayley puts Flair in the ring but the Queen turns the tables. Banks reappears on the apron and grabs Flair by the hair but she gets kicked off. Bayley tries to roll-up Charlotte but Flair kicks out and hits Natural Selection for the win!

Still to come, the Triple Threat King of the Ring match, as well as the Firefly Fun House.

The O.C. are interviewed backstage and AJ says they run the place. Bobby Roode and Dolph Ziggler walk up and laugh at them, saying that they didn’t look like they run the place earlier tonight. Ziggler says if they had any brains they would join forces to thwart their common enemies. AJ smiles and fist bumps Dolph.

Rey Mysterio makes his way to the ring, he’ll be facing Gran Metalik after the break.

The match gets underway and Rey takes a wristlock. Metalik flips out and they circle each other. Metalik hits Rey with a monkey flip, then Rey does the same to him while lying on his back. They do some flips and Rey looks to hit Metalik with a hurricanrana but the younger lucha lands on his feet. Rey hits Metalik with a headscissors onto the ropes but he can’t hit 619 and Metalik rolls him up for a near-fall.

Rey whips Metalik to the ropes and hurricanrana’s him over the ropes to the floor. Rey slides under the bottom rope, looking for a splash but Metalik isn’t there. He then connects with a superkick, before getting back into the ring and hitting a tope that seemed to land square on Rey’s head. They get back inside and Metalik hits a springboard senton for a near-fall.

Using the ropes against the KING of the ropes? Bold move, @reymysterio. #RAW pic.twitter.com/PS0OKZojNu

Metalik takes a headlock but Rey fights out. Metalik chops Rey in the corner but Mysterio fires back with a tilt-a-whirl that sends Metalik into the turnbuckles. Rey takes to the top rope and hits a seated senton, followed by a springboard crossbody. Gran Metalik hits a kick and a dropkick after jumping on multiple ropes. Metalik sets Rey on the top rope and climbs up top himself, before hitting Rey with a super hurricanrana for another near-fall!

Metalik gets hit with an up-and-over sunset bomb for a two count. Rey then hits Metalik with a hurricanrana onto the ropes, followed by a 619! Rey heads up top and hits the frog splash for the win!

After the match, Rey helps Gran Metalik to his feet and they share a moment.

We’re getting a 10-man tag team match tonight, with Braun and Seth teaming with Cedrix and The Viking Raiders, taking on The O.C. and Ziggler and Roode.

The Street Profits are backstage and they explain why this show is so amazing, giving their usual recap and what’s to come. Angelo Dawkins tries hitting on Sasha Banks through the camera. They send us to a video replay of the Daniel Bryan/Rowan/Roman Reigns feud.

Samoe Joe makes his way to the ring for the King of the Ring triple threat!

UP NEXT: Will we come one step closer to KING JOE as @SamoaJoe @KingRicochet and @BaronCorbinWWE battle it out in the #KingOfTheRing SEMIFINALS?! #RAW pic.twitter.com/GdW83P1Vh4