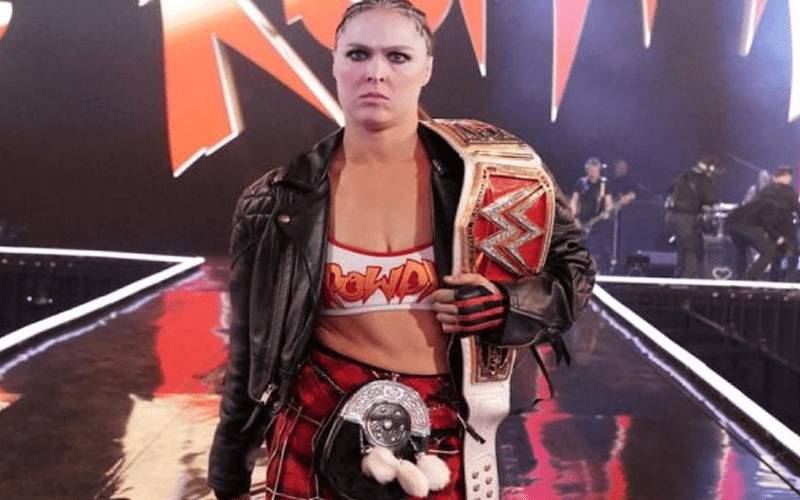 Ronda Rousey and Roddy Piper have a great connection that dated back years before his passing. As a way to honor his memory, Rousey wears his jacket to the ring or one much like the Hot Rod would wear.

Piper, who recently signed on with WOW, will not be rocking her father’s leather jacket to the ring. That is Ronda Rousey’s gimmick, although Piper did say that her family will eventually have “everything of his at some point.”

She went on to praise Rousey for her work in the Octagon as well and Teal Piper credited Rousey for getting her into MMA.

“I will not be wearing my dad’s gear if that’s what you’re wondering.”

“As far as getting anything back, I promise our family will have everything of his at some point, so, I’m not worried about that… Me personally, that’s the same jacket my dad put on me as like a five year old, you know? So I have such a sentimental appreciation for all of his stuff; I would feel weird wearing it to the ring. And more than that, especially as his kid, it’s a bit in-your-face to be showing up in his gimmick. I want to be my own person. So while my costume will have nods to him, it’s definitely not going to be the same style you see Ronda Rousey in.”

“Ronda, for me personally, I wasn’t a huge MMA fan until she came on the scene and I just fell in love with her. Regardless of training with Judo Gene LeBell and coming from the same fighting family that my father came from, I just loved what she was doing for MMA. So I was already on her team when she came into the light, and I was actually in the room when she was talking to my dad about using the name ‘Rowdy’ back for MMA years ago.”

We will have to wait and see when Ronda Rousey might come back, but she’s likely going to be wearing her tribute to the Hot Rod when she does. Teal Piper will be paying homage to her father in other ways, because she doesn’t have to wear his ring gear for people to realize the undeniable connection.