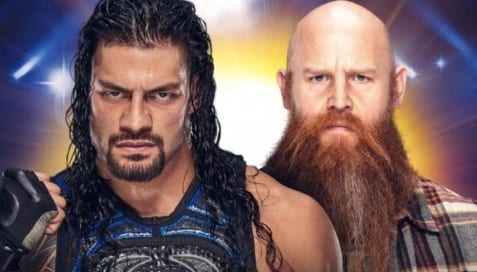 As seen on Sky Bet, the betting odds for Roman Reigns vs Erick Rowan at WWE Clash of Champions have been released.

The saga between Roman Reigns, Erick Rowan and Daniel Bryan has been taken in a million and one different directions already, and it doesn’t seem as if it’s going to get any less bizarre as we look ahead to the future.

This match between Reigns and Rowan should be pretty entertaining in more ways than one, both because of Bryan’s potential interference and the general potential of these two utter powerhouses going to war with one another.

At this moment in time Roman Reigns is the overwhelming favourite to pick up the win at Clash of Champions with odds of 2/9. Erick Rowan, on the other hand, is a 3/1 underdog.

We’d back this to be one of the most underrated matches of the night, and a potential showstealer if given the time. One way or another, though, it feels like this is going to lead to the match that we’ve all been waiting for from this feud: Roman Reigns vs Daniel Bryan.

These two individuals have fought before and will undoubtedly battle for a title again one day, but now, it feels like the best thing for both guys is going to be facing off against one another.

Regardless of who gets the win it’ll be enough for their respective stock to rise, given that their previous matches have been about as good as you would expect them to be.