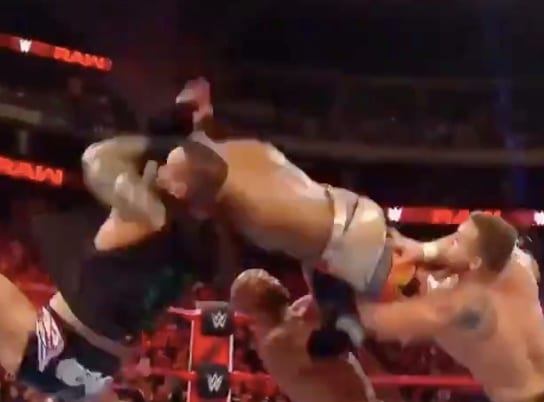 The new faction that has been created between The Revival and Randy Orton has certainly been turning a lot of heads in the WWE Universe over the last few weeks.

Randy was in need of a change of pace, which he got with this faction alongside his rivalry with Kofi Kingston, whereas Scott Dawson & Dash Wilder are widely considered to be one of the most underrated tag teams of the last few years, if not decades, in WWE.

On a recent episode of Monday Night RAW we saw the three men put together a really entertaining joint finisher, combining the Shatter Machine with the RKO – and they did so with flawless ease.

They still seem to be in the process of coming up with an official name for the move, but either way, it’s just exciting to see a storyline that these gents can get passionate about and really sink their teeth into.

We wouldn’t be surprised to see them all ‘hold the gold’ as we’ve become so used to seeing with factions, and while that may sound a little bit odd given that they aren’t even really ‘official’ yet, all three are pretty close to their respective top titles.

Clash of Champions could serve as the pinnacle for this team, but we have to wait and see how it all unfolds.

One thing we know for sure is that these fellas are going to continue to say whatever is on their mind, because they know how valuable they are to WWE.