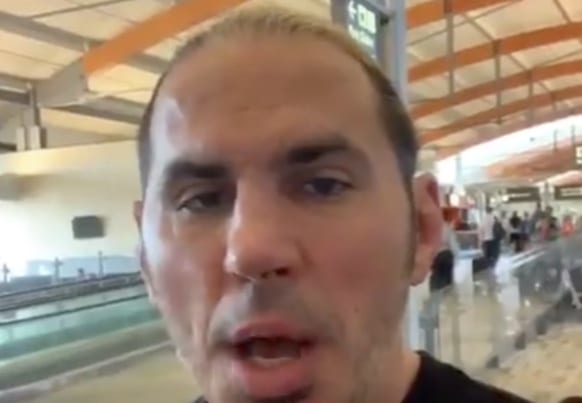 WWE superstar Matt Hardy hasn’t been seen all that much on WWE programming in recent weeks, but that doesn’t mean he’s just sitting back doing nothing.

In addition to working live events, Matt appears to be building a new (or old depending on how much you followed his work on the independent scene) character for himself, and so far, the skits he’s posting on social media are going down a treat.

The former multi-time tag team champion just seems to understand what it means to get over in this business, and that’s why he has always had one of the best brains in the industry.

As you can hear in the video Matt exaggerates the seriousness of his travel situation, much to the amusement of many fans who are enjoying this self-deprecating heel role that he appears to be implementing.

One of the big questions is when will we see this transpire on WWE television, because while both RAW and SmackDown Live are absolutely stacked with lots of talent, we feel as if Matt could do some big things with this character.

At the age of 44 he may not be sticking around from an in-ring perspective for too much longer, but we’re choosing to give him the benefit of the doubt with that.

Once Jeff Hardy decides to return then the brothers could do some fun things together too, or alternatively, Jeff could go back on a singles run which could be the best step forward for the duo.