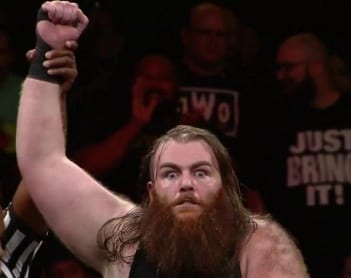 The guys and girls down in NXT continue to thrive and impress, with many of them looking set to be featured players once the brand’s official move over to the USA Network takes place.

Last night we saw two such stars squaring off in the main event on NXT, with Killian Dain and Matt Riddle giving it everything they’ve got in the name of, well, beating seven bells out of one another.

Riddle’s banged up ribs ensured that Dain was able to get the upperhand, and eventually, get the victory – and he had a very clear message to send to the masses on social media afterward.

Whether or not this leads to Dain getting a shot at the NXT Championship remains to be seen, but it certainly feels like he’s on a better path than he was just a few short months ago on the main roster.

Due to his imposing size and strength you could even argue that he doesn’t need to be a heel, either, with the fans clearly being on his side regardless of whether or not he’s using underhanded tactics.

The split from Sanity could’ve been the best thing that ever happened for him and his WWE career, and the most exciting aspect of it all is that he’s only just getting started.

Riddle, on the other hand, will almost certainly be able to bounce back regardless of the loss, especially when you factor his injured ribs into the equation.