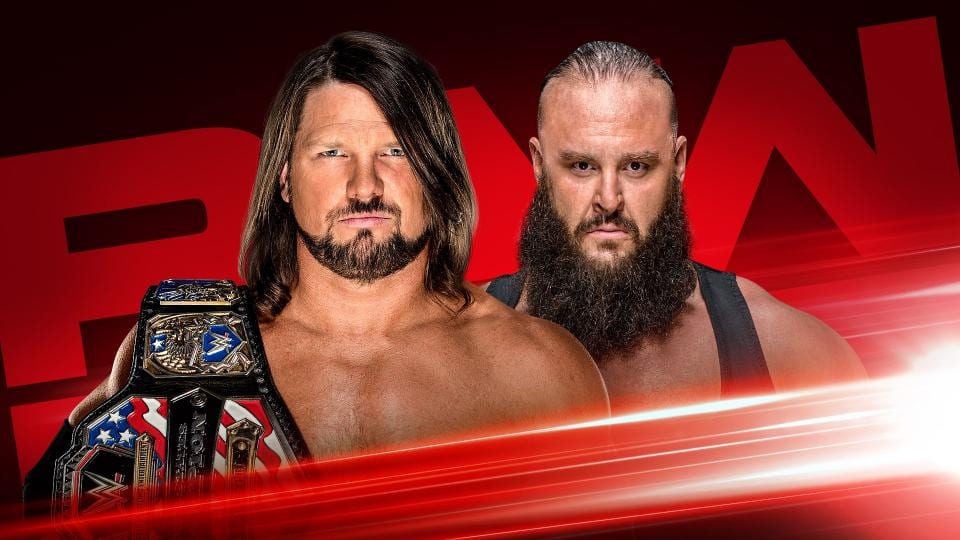 The marquee match for tonight’s Raw is Braun Strowman Vs. AJ Styles for the WWE United States Championship. Last week Braun came out to help Seth Rollins and Ricochet as The O.C. were beating them down. Tonight Braun gets a shot at AJ’s beloved title, however I think we all know it won’t go down clean.

Of course, the King of the Ring tournament begins tonight and we’re all very excited about that. There will be two matches from the 1st round tonight, which are Cesaro Vs. Samoa Joe, and Sami Zayn Vs. Cedric Alexander. Seeing as Zayn hasn’t won a match since returning from injury, his chances aren’t looking so hot, but don’t be surprised if McIntyre costs Alexander the match.

Also happening tonight is an episode of King’s Court with Jerry Lawler. The King brings his talk-show back and this time his guest is Sasha Banks. Last week, Banks returned and put a real beating on both Natalya and Becky Lynch. Tonight she must answer some questions as to why, but expect fireworks.

And that’s the preview for tonight’s Raw. We’ll be doing live play-by-play results and you can keep up to date via the Ringside News app but don’t forget to follow us on Twitter and Instagram, and enjoy the show!

Raw opens with The Big Dog, Roman Reigns, coming to the ring. Jerry Lawler is on commentary tonight because Corey Graves is on vacation.

YOU THINK THE BIG DOG’S PUMPED?!@WWERomanReigns is kicking off #RAW LIVE on @USA_Network! pic.twitter.com/UEirp40ahl

We see a video package of the recent attacks on Roman Reigns, and everything that has happened thus far. Ziggler makes his entrance next, and he’s going one-on-one with Roman.

Before the match, Ziggler says he wants to tell Roman face-to-face that he’s not a keyboard warrior, he’ll say this to his face; he’s glad Roman is OK. However he doesn’t understand why Roman gets attention for things almost happening to him, but he…and the fans start chanting “you suck”. Ziggler shuts them up, then says Roman almost got attacked twice, whereas he was speared three times by Goldberg. He didn’t see the spears coming, he said he assumed that Goldberg had to wait six months between spears. He says Shawn Michaels superkicked him, and last week he was beaten by Maryse’s husband. He says that Roman, like everyone else, knows it should be him. He implores Roman to agree, then superkicks him out of nowhere. Dolph takes his jacket off and begs the referee to start the match, but the official helps Roman to his feet first, while the fans chant “Goldberg”.

The match gets underway and Roman avoids Dolph in the corner, then clocks him with an uppercut and Dolph rolls out of the ring. Reigns rolls out, runs around the ring, and looks for a Superman punch off of the steel steps but Dolph avoids it and hits a Zig-Zag on the floor!

We’re back live and Dolph has Roman in a headlock. Dolph connects with a right hand, then runs at The Big Dog in the corner but gets tossed to the outside. Roman leaves the ring and hits DZ with a Drive-By Kick.

Back inside the ring, Reigns drops Dolph with a clothesline, then unloads lariats in the corner. Roman looks for the Superman but Dolph rolls him up for a two count, then connects with a snap DDT for a near-fall.

Ziggler looks for the Zig-Zag but Reigns shrugs him off. Reigns looks for the spear but Dolph hits a sunset flip pin attempt. Dolph looks for a Fame-Asser but Roman grabs hold of him. Ziggler escapes and shoves Roman into the ring post, then hits the Zig-Zag for an incredible near-fall – Reigns is the current master of the last second kick-out.

Dolph heads to the corner and tunes-up the band, then looks for Sweet Chin Music but Reigns catches it, spins him around and hits a Superman punch for a near-fall. Reigns gets pumped up, runs for the spear but Dolph catches him with Fame-Asser for a near-fall. Dolph gets up and talks trash to Roman, runs at him, but Reigns bursts out of the corner with a spear for the win!

We see a replay of last week when Sasha Banks returned and beat the holy hell out of Natalya and Becky Lynch.

Becky Lynch appears on screen for a promo. She says last week Sasha Banks beat her stupid with a chair. Becky says people want to know why she keeps challenging the locker room but it’s because she wants the best, most aggressive version of the people challenging her. That’s what Sasha Banks is at the moment, and she has The Man to thank for that. Becky says that, a few months ago, Banks ran away from WWE with her career as cold as ever. Now she’s hot as ever. She asks what Banks did on her four month vacation that made her so hot? Absolutely nothing. Lynch did it all. A few press interviews by Lynch made Banks the top dog in 2019. Sasha Banks is the greatest woman on the roster to never be great. Lynch says Banks can swing her chair and wear the Dollar Store glasses all she likes. The bottom line is she put more work into getting Banks into WWE than Banks did. Why did it take Lynch to unleash the real Banks? The greats don’t need to be goaded, because this is a cat and mouse game. She says that when she does get her, she’ll give her something to go home and cry about.

Back live in the ring and Jerry Lawler is there, with red carpet and a throne in the ring. The King talks about the King of the Ring tournament, saying it’s one of his favourite things in WWE. He rhymes off some previous winners, from Bret Hart to Brock Lesnar, each getting a smattering of cheers. The King explains what the King of the Ring is all about, then shows the bracket on the big screen. He believes the tournament will come down to Cedric Alexander and Ricochet on the Raw side of things. Before he can finish his prediction however, some of the lights go out and we hear weird noises. The King says “oh no, I’ve seen this before”, and he leaves the ring. Lawler starts walking back up the ramp and the lights keep shutting off until the arena is dark. Weird horror noises playing and a spotlight appears on Lawler, only for The Fiend to start walking up behind him. Lawler turns around and Bray takes him down with the Mandible Claw. Wyatt chokes King out and the lights go out. When they come back up Bray is gone and King is laid out. Officials run out to tend to him as the fans chant “yowie wowie”.

We return and see replays of The Fiend attacking Jerry Lawler. We will get an update on Lawler’s health later tonight. In the meantime, Vic Joseph from 205 Live has joined the commentary team.

We start with The Miz and Drew McIntyre. The Scotsman kicks Miz and lifts him above his head but Miz escapes and tags Ricochet before hitting a clothesline in the corner. Miz kicks Drew and Ricochet hits a standing moonsault. Corbin runs in but Miz clotheslines him out of the ring. Ricochet Irish whips Miz who dropkicks Corbin and Drew through the ropes, followed by a moonsault off of the ring post by Ricochet.

We come back from the break to see Miz punching Corbin. Miz bounces off the ropes, but Corbin hits him with a back elbow. Corbin punches Miz and shouts that he will be the King of the Ring – the two of them face-off next week.

McIntyre is tagged and he hits Miz with an overhead belly-to-belly suplex for a near-fall. McIntyre whips Miz into the ropes, and connects with a clothesline. Corbin is tagged again but Miz punches him back. There is something going on in the crowd that has the crowd distracted. Corbin comes back with a clothesline in the corner. McIntyre tags in and hits a spinebuster for a near-fall but Miz comes back with a DDT and both men are down.

Ricochet and Corbin tag in, and the former takes the latter down and hits an enzuigiri. Ricochet floors McIntyre and sidesteps Corbin, who looks for the out-and-in clothesline but Ricochet avoids it and hits a dropkick for a one count. Ricochet hits a running shoulder in the corner and kicks Corbin, followed by a springboard clothesline and a standing shooting star press, but McIntyre breaks it the pin attempt. Miz gets in the ring to help, but McIntyre big boots him. McIntyre then tells Ricochet this is a preview for next week and throws him across the ring.

McIntyre looks for a Claymore Kick, but Ricochet superkicks him. Miz then hits McIntyre with a Skull Crushing Finale but Corbin gives Miz a Chokeslam. Ricochet knocks Corbin back and goes for a springboard, but Corbin grabs him by the throat. Ricochet flips through a chokeslam, but Corbin responds with a Deep Six for a near fall.

Corbin gets angry and puts Ricochet on the top rope, but The One and Only knocks him back. Ricochet hits a missile dropkick and sets him up in the corner. Ricochet runs but Corbin sidesteps him and charges, but Miz pulls Ricochet out of the way. Corbin hits the ring post shoulder-first, and Ricochet hits him with the Recoil for the win!

After the break, AJ Styles battles Braun Strowman with the United States Championship on the line.