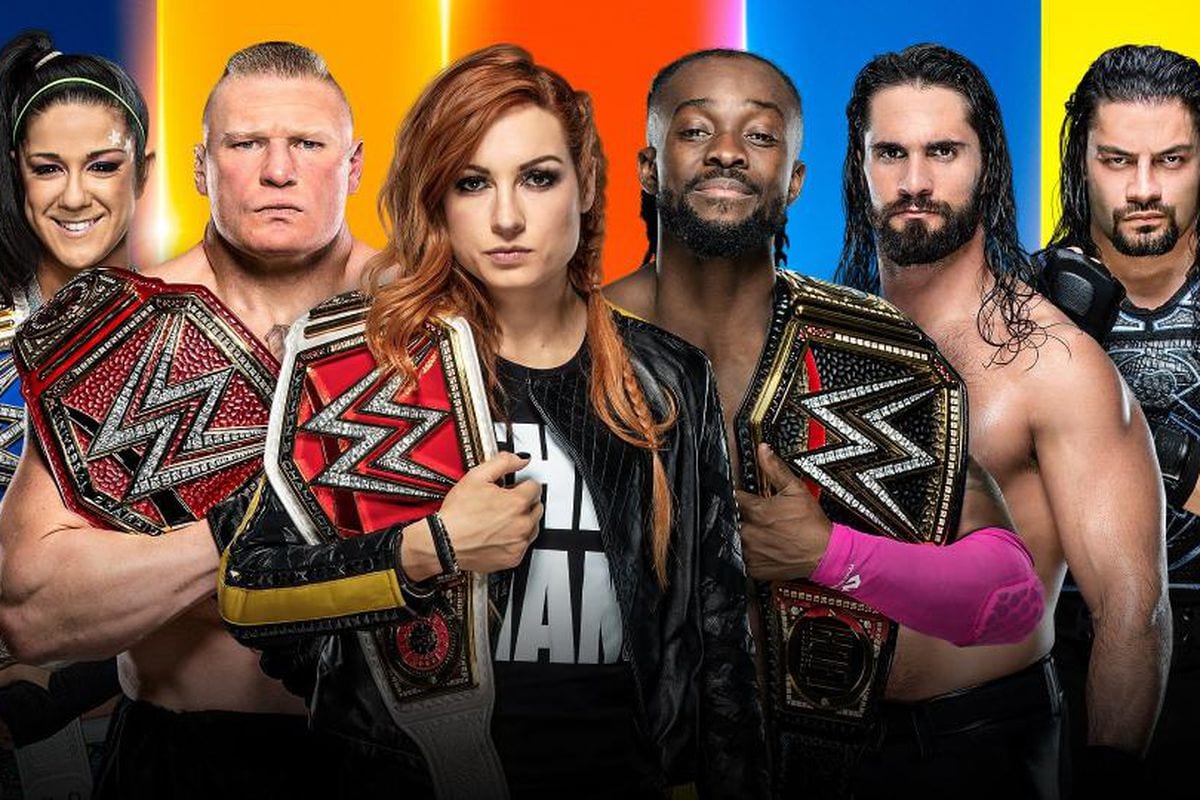 Ladies and gentlemen, the party of the summer is here! WWE’s second of four nights in Toronto brings us SummerSlam 2019 for a mammoth card that is expected to run seven hours, including the Kick-Off Show, beginning at 5 PM.

That’s ten matches, that we know of, but it’s odd that there are no tag team bouts announced. We know The Uso’s can’t be there, but to have neither Raw nor SmackDown’s tag titles on the line is bizarre. Anyway, that’s the card for SummerSlam 2019, which we will be providing live updates for from 5 PM until the end of time. Be sure to join the conversation in the comments, by downloading the Ringside News app, or by following us on Twitter or Instagram. Enjoy the show.

The Kick-Off panel consists of Coach, Beth Phoenix, David Otunga, and Charly Caruso. Sam Roberts and JBL are standing at ringside, and they mention Goldberg Vs. Miz.

The Miz joins the panel and he says Dolph has been talking a lot about legends and tonight he has his big chance. He says that, whatever is left of Ziggler, he gets tomorrow night on Raw. He says tonight is going to be awesome.

Kofi Kingston takes on Randy Orton tonight with the WWE Championship on the line. We see a video package hyping the match, going back to 2007. We return to the panel and Beth says everyone did know back then that Randy held Kofi back. Miz says none of that matters, you can only look at yourself and not blame anyone. Miz says he’s excited to see this version of Kofi, who is more dangerous than ever. They go to Sam and JBL again, and Sam says this is the match he is most excited about. JBL says Kofi wasn’t ready ten years ago, he didn’t deserve to be there. But he does now and this could be a show-stealer.

We go backstage for an interview between Charlotte and Kayla Braxton. Charlotte says that Trish Stratus has been sitting at home, day-dreaming of one last match, and tonight we realise she was never that good. Never on her level. Back with the panel, Coach says this is a dream match and Charlotte has the chance to take the crown. Phoenix says that beating Trish Stratus is the pinnacle of the business, but Flair has her work cut out for her.

We see a video package for Bray Wyatt Vs. Finn Balor. Sam Roberts says it’s going to be a massacre tonight. He says if Finn had any brains at all, he would come as The Demon, otherwise it’s going to be a horror movie. He says he has zero chance tonight. JBL agrees that The Fiend is likely to win, but that Balor is a technical genius and it could make for a great match-up. Mick Foley has joined the panel, and he says he’s lost a lot of matches in his career and faced a lot of intimidating foes but that he never felt as hopeless as when he was in there with The Fiend. Coach asks Foley what is so special about the Mandible Claw, and Foley says it suffocates you as well as presses on nerves under the tongue that paralyse you. He says he developed it to intimidate The Undertaker and, based on what he experienced, The Fiend has mastered it.

It’s time to watch a hype video for Kevin Owens Vs. Shane McMahon. Owens says Shane gets to do whatever he pleases because he’s a McMahon. He put his job on the line tonight because he knew that is the only way in which Shane would accept. The panel discuss the match and say that Shane can’t be taken lightly, because he’s not the best but he is a crazy person. There’s more on the line for Owens however, so the pressure is on him.

Finn Balor is backstage and in walk The O.C. Finn says they’ve been busy lately, pointing to their gold. Gallows says yes, they’re making sure everyone knows it’s their world. Anderson says tonight Styles tops Ricochet one last time, and Styles says Finn might need some help. Balor says he’s ready to play mind-games with Bray. Styles says he knows that but he can offer him their services and they hold up the Too Sweet, and walk of.

After a video, Sam Roberts says that it wasn’t long ago he told AJ Styles he needed to find his bite again, and it seems he has. JBL says this match could be a classic because Ricochet is like Too Cold Scorpio x10. He compares Ricochet to Shawn Michaels as a once in a lifetime athlete.

The bell rings and Gulak sprints across the ring and delivers a front dropkick. Gulak then takes a headlock, transitions into a wrist-lock, then Lorcan escapes via some agility. They lock-up and Gulak takes Lorcan down to the mat with an arm hold.

Lorcan forces Gulak to the corner and delivers some chops, followed by a clothesline in the corner. Gulak responds with a clothesline of his own, then a scoot slam into the ropes. Gulak takes the back of Lorcan and holds him in a headlock. Lorcan powers his way out and delivers some European uppercuts, followed by a running blockbuster for a two count.

Lorcan takes Gulak out of the ring and chops him around ringside before throwing him back in. Gulak grabs Lorcan and gets him in the Gulock as he’s coming into the ring, but Lorcan gets his foot on the rope. Both men take each other out with stereo clotheslines.

They get to their feet at the same time and Lorcan clashes Gulak with an open hand. Gulak get mad and takes Lorcan down with rapid open-hand slaps. Gulak gets the Gulock in again but Lorcan reverses into a pin for a near-fall. Lorcan grabs the face of Gulak and slaps him silly, followed by three running European uppercuts. Gulak pokes the throat of Lorcan, followed by the Cyclone Crash from Gulak for the win.

Jerry Lawler and Booker T have joined Coach and Charly Caruso on the Kick-Off Show. Drake Maverick walks up and starts asking if they’ve seen R-Truth. He vows not to leave Toronto until he’s Champion. Meanwhile Truth and Carmella are literally sitting under the desk. They come out eating popcorn and Twizzlers. Truth says he’s excited for NXT TakeOver tonight and they try to correct him but he doesn’t hear them. Maverick appears with a referee and starts throwing popcorn at Truth. He chases him around the table but Carmella trips him and they escape.

Natalya is backstage for an interview. She says Becky has been trash-talking her non-stop but tonight that ends when she locks in the Sharpshooter. And when she does she will walk away the Women’s Champion. Lawler says that, from his experience, the Sharpshooter is the most painful submission move he’s been in. Lawler says that Becky has embraced being the hunted, and Booker agrees.

The match gets underway and Murphy clocks Apoolo with a knee right out the gate for a two count. Murphy stomps Apollo down in the corner, then takes a headlock. Apollo fights out and both men take each other out with stereo crossbody’s.

They get to their feet and Crews delivers a flurry of strikes, including an enziguiri, but Murphy counters with an arm drag. Murphy goes to the top rope but gets caught and hit with a Samoan drop, followed by a standing moonsault.

Apollo lifts Murphy up but the Aussie lands on his feet. Apollo goes up top but Murphy pulls his head between his legs and superkicks it. Murphy hits a running powerbomb for a near-fall. Murphy is thrown over the ropes and Apollo looks for a moonsault from the apron but Murphy grabs him and throws him into the steel steps. From out of nowhere, Rowan attacks Murphy at ringside.

Rowan slams Murphy into the barricade over and over, then throws him across the floor. Rowan connects with a running crossbody, followed by slamming him into the ring post. We see Daniel Bryan watching on a monitor backstage.

Elias is in the ring and he says he’s been here all week long, signing autographs and Toronto is a special place. So he wrote a song about it. Elias begins singing; he says Torontonians think they’re the centre of the universe; they don’t have a Stanley Cup; that the Blue Jays can’t sell out a game; that he has nothing good to say; and that he can’t wait to leave like Kawhi Leonard. Elias is interrupted by none other that Toronto’s very own, EDGE! The Rated R-Superstar comes to the ring and stands across from Elias, then runs and hits a Spear! Edge poses before leaving. That was awesome.

Alexa Bliss and Nikki Cross make their way to the ring, to defend their Tag Team Titles. Bliss is dressed like Buzz Lightyear. The IIconics are their opponents and Billie Kay is dressed like Maleficent. Kay calls Bliss and Cross “Toy Story wannabes”, and they say they are here to take back what is theirs.

The match begins with Alexa and Billie. Kay takes a headlock but Alexa gets out. Alexa pretends to shoot a laser at Kay, like Buzz, then knocks her down. Tags are made to Peyton and Cross. Alexa and Cross double-team Peyton, before Cross hits a crossbody from the top rope for a two count.

Royce tries to roll-up Cross but it’s no good, and she tags Kay, who comes in with a big boot to Cross. Kay unloads some ground and pound, and she teams with Royce to stomp Cross. Kay can’t pin Nikki, so goes crazy and tags Peyton. Cross and Peyton both knock each other down and make tags.

Alexa takes down Billie with multiple clotheslines and a handstand knee to the gut. Alexa throws Peyton from the ring and mocks her, only to turn into a big boot from Kay. Billie tags Royce, and Cross grabs Kay from behind and drags her out of the ring, while Royce hits Alexa with a neckbreaker. Royce throws a hissy fit, but Alexa slaps her. Alexa hits Twisted Bliss for the win.

The panel rundown the entire SummerSlam card one more time before showing a video package for Seth Rollins Vs. Brock Lesnar. They say Seth Rollins has more guts than most men but that he has a massive task ahead of him tonight in the form of Brock Lesnar.

And that’s it for the Kick-Off Show, SummerSlam officially starts now!