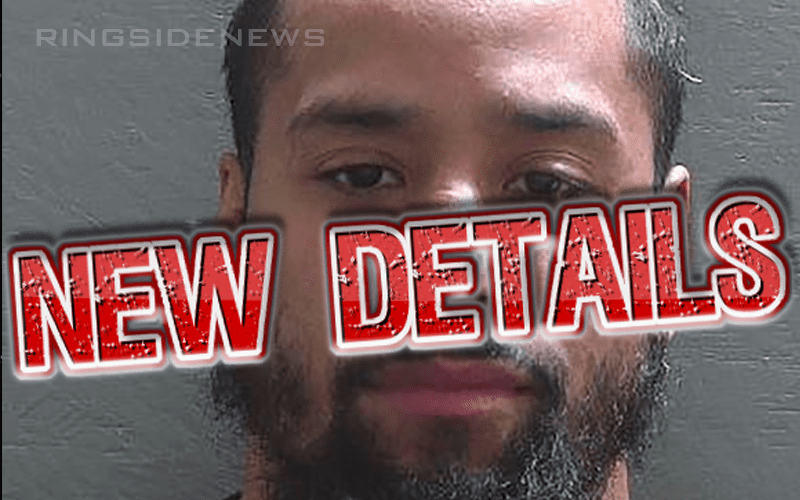 Jimmy Uso was arrested and charged with a DUI and given a speeding ticket early on Thursday morning outside Pensacola Florida. Now we know even more details surrounding the arrest and it was quite a situation.

ABC 3 WEAR TV reports that a complaint about a possible DUI came in around 1:30 AM on Thursday morning. An off-duty officer advised a deputy that there was a car traveling over 100 miles per hour as it drifted between lanes.

It was said that the vehicle pulled in at the Ticket Spots Bar, but when the deputy showed up, Uso’s car was already gone.

While sitting at a Publix, the deputy then observed a car accelerating rapidly and he clocked the vehicle going 86 miles per hour in a 45 mile per hour speed zone while traveling close to other cars. This is when Uso was pulled over.

The police report indicates that Jimmy Uso had trouble holding his driver’s license, registration, and proof of insurance when the officer requested them. Uso was also reportedly slurring his speech, had bloodshot watery eyes, dilated pupils, and his eyelids were also “droopy.”

The officer could smell alcohol in the car and he requested that Jimmy Uso step out of the car to speak with him. After several requests to step out of the car, Uso finally complied. However, he reportedly had trouble standing on his feet. This is when the officer asked Jimmy Uso if he would ride with him to a nearby flat well-lit parking lot for a sobriety test.

Jimmy Uso did ride with the deputy to the parking lot, but then he “seemed to be confused and asked what was happening.” The officer revealed that Uso would need to take a field sobriety test to which Jimmy asked if he needed a lawyer and whether he was being detained.

The officer revealed that it was not possible to have a lawyer present at that time and he was going to conduct a field sobriety test. Then Uso reportedly “took his phone from his pocket and attempted to put his phone toward the deputy’s face.”

At that time, Jimmy Uso was placed in handcuffs and he became “uncooperative and had to be told numerous times to have a seat in the patrol car.” Jimmy Uso reportedly kept saying that he was uncomfortable and asked to speak with another deputy numerous times.

The report also revealed that on the way to the jail, the officer needed to roll down his windows to let the car air-out due to the overwhelming smell of alcohol coming from the WWE Superstar.