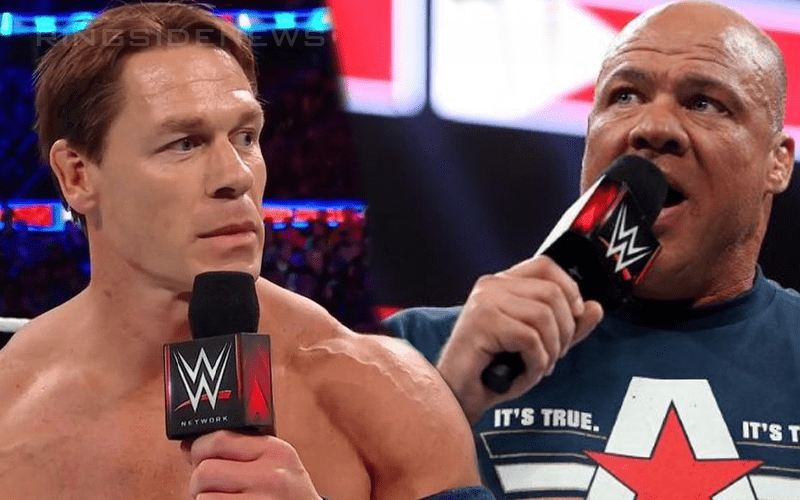 Kurt Angle wrestled his final match at WrestleMania 35. Baron Corbin was not the man that fans wanted to see Angle face, but that’s what happened.

While speaking to Collider, Kurt Angle revealed that it was his decision to retire at WrestleMania 35. This was due to his own judgement and nothing that was dictated to him.

It just so happened that WWE was building a storyline with him and Baron Corbin at the time. Therefore, it wouldn’t have made sense to demand John Cena as his opponent. However, if Angle would have waited another year to retire he is confident that Cena would have been his final match.

“I decided to retire at ‘Mania. Vince didn’t tell me ‘Listen you’re done after ‘Mania.’ I went to him and said ‘Listen, I want to retire. I’m not able to do what I used to, and if I can’t be the old Kurt Angle, I want to be done now.”

“I was hearing a lot of feedback from people that Kurt looks like he’s in pain in the ring and he’s slower then he used to be, and it’s like ‘Guys, I’m 50 years old, of course I’m slower.”

“You have a program that you’ve been doing for a year; I’m not throwing it away. It’s with Baron Corbin, so whether you want to retire now or whenever, you’re going to wrestle Baron at WrestleMania.”

“‘You know what, that’s fair. You’re right.’ I can’t just change the whole thing and what they had planned and say ‘Hey, add Cena in.’ So I think that if it was next WrestleMania [36], it would have been John and I.”

Nobody can help what happened at WrestleMania 35 and fans should have seen it coming. Because there was one opponent for Angle to face and that’s why Baron Corbin defeated him. Facing John Cena might have been a better way to close up Angle’s Hall Of Fame career, but it just wasn’t in the cards this time around.