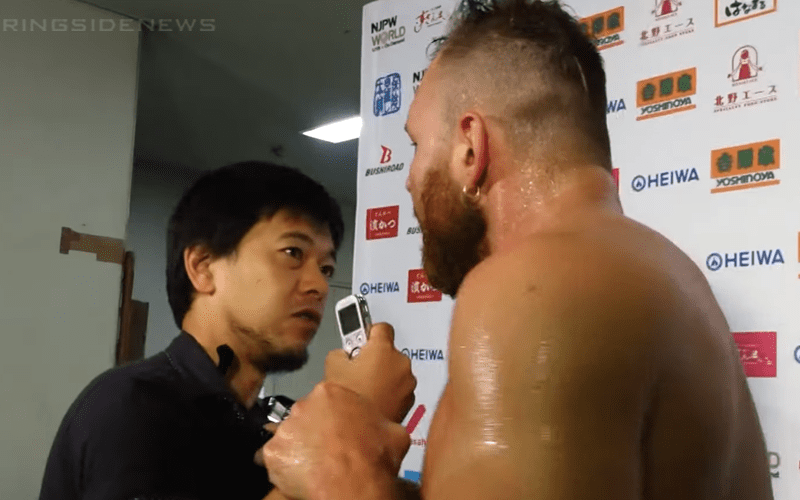 Jon Moxley is doing really well in the G1 right now, but he’s not keeping the abuse strictly for the wrestlers he meets in the ring.

After a recent match, Moxley got pretty hands-on with a reporter. In the process he also cut a pretty scathing promo in typical Moxley fashion.

“Look, I know I’m new to New Japan Pro Wrestling but please, can we get some air conditioning in some of these buildings? Jesus, it’s like a sauna out there. I’m cooking. I’m cooking in this tournament too.”

“Do you believe me yet? Do you believe me yet? You having fun eating your words yet? People all over the world, do you like the taste of that, huh? How’s it taste? You think it’s a joke, you think I’m not serious? Believe it. I know it’s hard for some of you to believe, but Jon Moxley is going to win the G1. I don’t stand back, I don’t let anybody take first place. I take first place from here on out. It belongs to me. OK, let’s be real. Let’s be real here. Shingo Takagi is not a junior heavyweight. Shingo Takagi is far from junior heavyweight, the man is a friggin’ tank. Nearly took my head off. I want to see the results of his weigh-in. I’m glad he’s in the heavyweight division where he belongs, he’s a friggin’ tank. He’s like a rhinoceros. If he’s a cruiserweight, I’m one of the Doobie Brothers. I just wanted to make that known.”

Jon Moxley is obviously having a lot of fun in NJPW. He is doing everything that he wants to do right now which should make any fan happy. This includes any fans who still aren’t too thrilled that he left WWE.

One thing we can be sure of is that none of this is a joke for Jon Moxley.