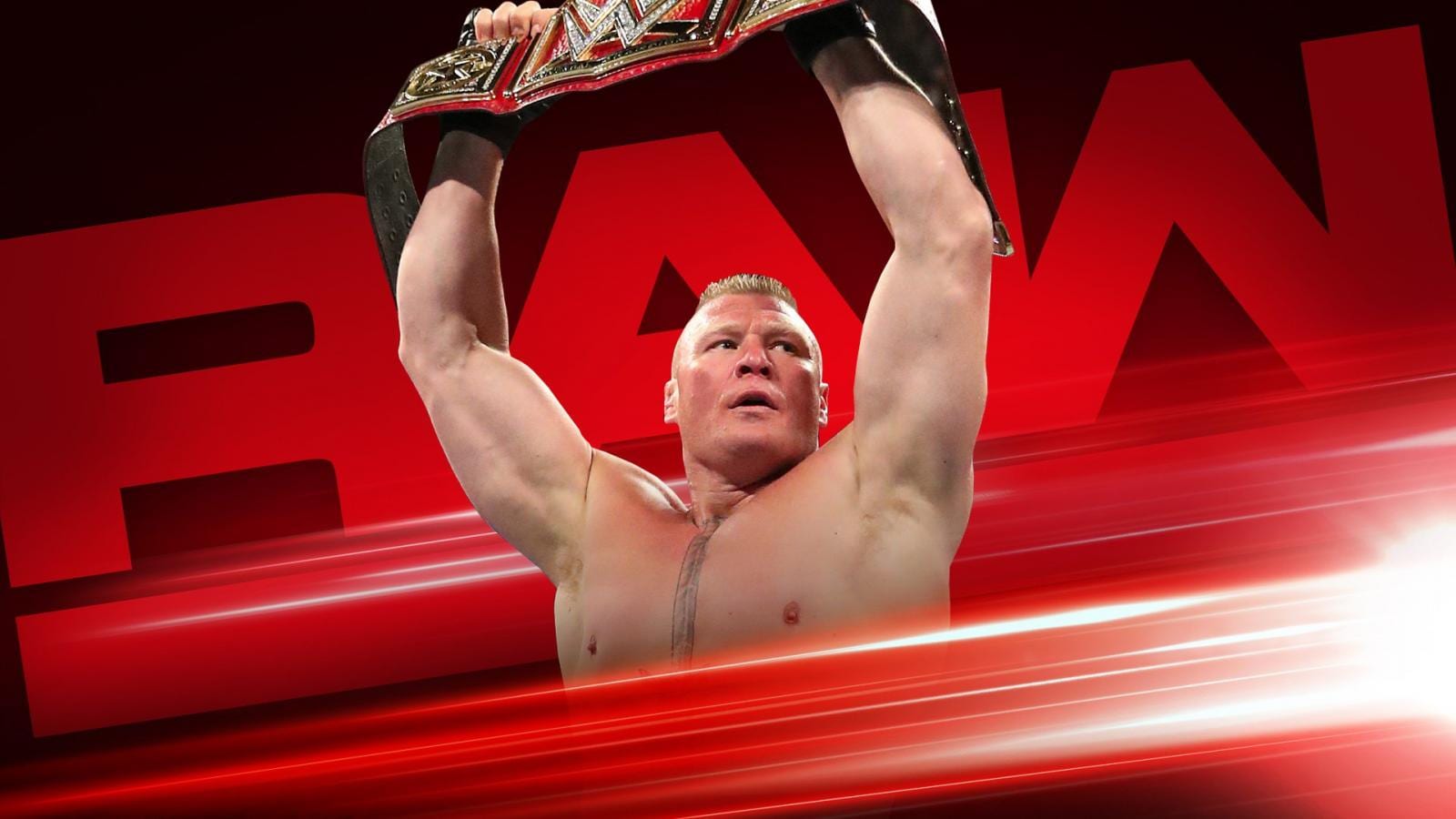 Well, Paul Heyman’s spoiler was just that. At last night’s very good Extreme Rules PPV, Brock Lesnar came out and cashed in the Money In The Bank briefcase to take the WWE Universal Championship away from Seth Rollins. Now the Brock Party can resume, and just in time for the first official Monday Night Raw under Paul Heyman’s watch.

Last night, AJ Styles defeated Ricochet to become the new WWE United States Champion. And he did so with the help of Anderson and Gallows. One would imagine that a rematch would be in order, probably at SummerSlam. In the meantime, how can Ricochet stay clear of more beatings from The Club?

So, while Seth Rollins lost his Universal Championship last night, he and Becky Lynch did defeat Baron Corbin and Lacey Evans. This leaves us wondering who will step-up to face Lynch now that Evans is out of the picture. Will it be Sasha Banks? Or will she be heading to SmackDown Live to team with Bayley to face Nikki Cross and Alexa Bliss?

Well that’s the preview for tonight’s show. Not too much to go on but that’s potentially exciting as it leaves room for new feuds under Paul Heyman. Of course, next week is the big Raw Reunion show, which will feature D-X, the NWO, Ric Flair, Steve Austin, The Dudley Boyz, and more. Until then, you can stay in touch via Instagram, Twitter, or the Ringside News app. Enjoy the show!

We see replays of Lesnar’s win over Seth Rollins last night as he and Heyman make their way to the ring. Paul introduces himself and Heyman, with Brock seemingly in good spirits. Heyman says he told us what would happen last week, and he told us again last night, and low and behold it all came to pass. The fans start to boo and Heyman tells them to boo themselves for not believing him.

Heyman says everybody in WWE needs to remember that he told them what would happen. He told them they had better have an opponent ready for Brock. Heyman jokes that he has “all the stroke” around here nowadays, so he has figured out how to determine who Brock’s SummerSlam opponent will be. He admits his client isn’t the easiest man to negotiate with and, to prove his brilliance, tonight we’re going to have a cross-brand 10-man battle royale that will include Seth Rollins, Roman Reigns, Rey Mysterio, Sami Zayn, Baron Corbin, Bobby Lashley, Randy Orton, Cesaro, Braun Strowman, and Big E.

Heyman says if he was Seth Rollins, he would be wary about winning tonight. Because he walked into last night’s show as Becky Lynch’s stud but walked out as a gelding (a castrated horse). So Seth is proof that fighting Brock Lesnar is dangerous to your health and your manhood. And anyone who steps in the ring with Brock needs to know that, in this Universe, “you’re all Brock’s bitches.”

Ricochet makes his way to the ring, running past Brock in the process. He’ll be in action after the break. Later tonight we’re getting Samoa Joe Vs Finn Balor, as well as a Fatal 4-Way Elimination Match to determine who faces Becky Lynch at SummerSlam.

Ricochet & The Uso’s Vs. The Revival & Robert Roode

Roode is no longer sporting the moustache. We start the match with Scott Dawson and Jimmy Uso. Jimmy lands a superkick right off the bat and Dash runs in but gets thrown to the outside. Ricochet tags in and hits a Recoil, followed by a running shooting star press for a pinfall.

The second fall starts with Ricochet and Robert Roode. Ricochet is forced to the corner and chopped but fires back with a handstand headscissors and a dropkick. Jey Uso tags in and kicks Roode in the gut but gets caught with a spinebuster.

Dash Wilder tags in and knees Uso in the mouth. He slows things down and punches him around the ring before body slamming him. Dash looks for an elbow drop but Jey dodges it. Jey ducks Wider and delivers an atomic drop. Dawson tags in and hits a flapjack.

We return to see the third fall begin and Dawson beats on Jey Uso rapidly. Wilder tags in and applies an abdominal stretch. Jey fights out and floors both Uso’s before making the tag to Ricochet.

Roode is also legal and Ricochet takes him down with a dropkick before kicking Dawson off the apron and tossing Dash out the other side. Roode looks for the Glorious DDT but Ricochet reverses into a pin attempt. Ricochet connects with the Recoil, followed by the 630 for the win.

AJ Styles, Anderson, and Gallows make their way down to the ring and taunt Ricochet with the United States Championship. Styles dives through the ropes and onto AJ. Anderson and Gallows pound on Ricochet but The Uso’s come to help. The Revival start beating on The Uso’s but they end up getting superkicked, then both Uso’s look for stereo dives but Roode drags Jimmy out of the ring. Jey gets hit by the Shatter Machine, then they look to beat on Jimmy but Ricochet comes in with a springboard crossbody. And finally, Styles takes out Ricochet with a Phenomenal Forearm, then Anderson and Gallows hit the Magic Killer. The Club pose over Ricochet.

Erik starts against one of them and wipes him out. Ivar tags in, and The Viking Raiders knee him down. Ivar brings the other guy in, and they annihilate him. Erik slams Ivar into the one guy, but Ivar lifts the shoulders before the count of three.

Erik tags in, and they hit a double-team backbreaker/gutbuster. Erik and Ivar hit a German Suplex/clothesline before hitting the Viking Experience for the quick win.

We see replays of The Undertaker and Roman Reigns defeating Shane McMahon and Drew McIntyre.

We see Drew McIntyre arriving backstage earlier today and he found Cedric Alexander in a locker room and told him he’s a joke, as well as a few others standing with him. McIntyre says the time has come for him to disembowel and dismember him. Then says he’s joking because that’s illegal but he will humble him. Alexander says he is humble but the tonight he will prove himself to McIntyre.

As soon as the bell rings McIntyre storms Alexander and stomps him down. Alexander makes a comeback and knocks him out of the ring, then connects with a summersault plancha.

.@DMcIntyreWWE gets dropkicked out of the air! What a sentence. #Raw @CedricAlexander pic.twitter.com/tWDJqd1gho

Alexander tosses Drew over the ropes but McIntyre lands on his feet and goes to the top rope. McIntyre then jumps into a dropkick. Alexander goes for a handspring kick, but McIntyre hits the Glasgow Kiss. McIntyre goes for an inverted Alabama Slam, but Alexander counters into a roll-up for the win.

Also backstage, Samoa Joe says he’ll be waiting to hand Balor another loss. Joe then makes his entrance as we head to the break.