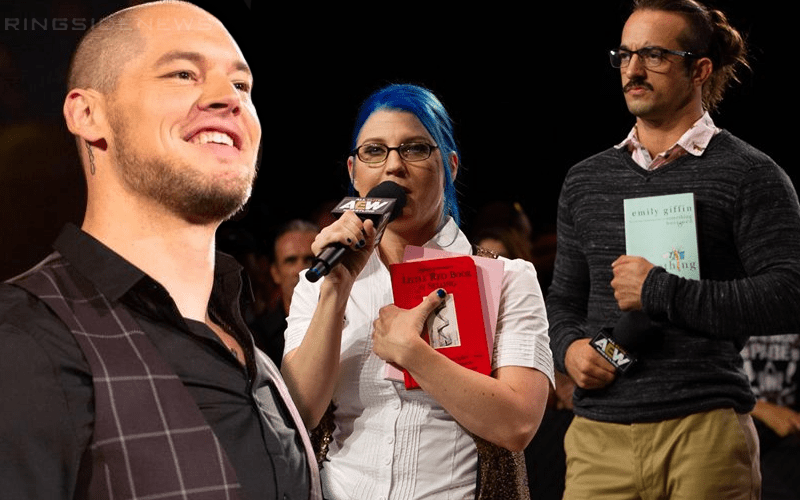 AEW listens to their fans, but they might not be too eager to drop the Librarians.

Leva Bates and Peter Avalon didn’t impress many fans with their Librarian gimmick during the AEW Fyter Fest Buy In special. Some people remarked that they had “go away” heat. As it turns out “Go Away Heat” was the title of the newest episode of Being The Elite.

During the show’s intro, The Young Bucks were shown writing out their long-term booking plans. Just when Nick Jackson was about to cross the Librarians off the list, Leva Bates came in and said that fans loved the gimmick and she thanked the Bucks for this great opportunity and role before giving them a hug and going away.

This is when Nick Jackson admitted he was about to nix them, but he’s considering them for a year-long storyline. Matt Jackson said that they should do a five-year storyline instead. He made plenty of allusions to how WWE is using Baron Corbin and his “go away heat” while saying that the Librarians can play double duty for shows and be special guests referees.

Nick Jackson went as far as to say that they should give them a “Baron Corbin like push” even though they bleeped out the word “Corbin.” In fact, the “F’n Librarians” are going to be in the main event once AEW’s television show rolls around.

This was a pretty hilarious intro to Being The Elite and shows that they are obviously paying attention to the response everyone is getting within the Internet Wrestling Community.