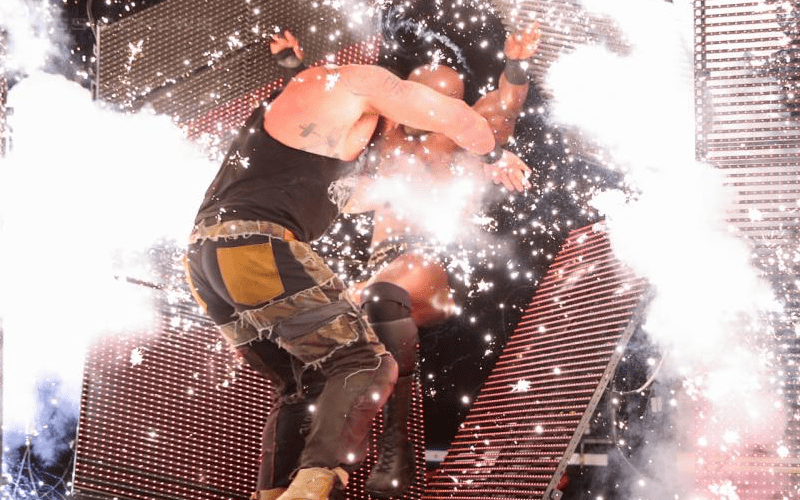 Braun Strowman and Bobby Lashley started off RAW last week with a huge bang as they drove a hole through the back of the set. This resulted in all kinds of chaos.

Corey Graves yelled “Holy sh*t” and paramedics rushed to help Lashley and Strowman. Eventually, both were taken away in ambulances, but the big video wall on RAW’s set remained off for the next few minutes before they turned it back on. This confused some fans who were under the impression that the spot broke the entire video wall.

Bryan Alvarez asked about this and cleared up some confusion during Figure Four Daily. He explained that WWE shut off the big screen and entire entrance video wall because they were afraid of the danger that Braun Strowman and Bobby Lashley might be in. Then once that situation was over with they continued on with the show as usual with a big hole in the back of the entrance.

“The story wasn’t that [the set] was broken, the story was that when things started blowing up they shut it off while they got the guys out of there because they were afraid they’d be electrocuted. So once they guys were taken out of there and put in the ambulance and they were taken away and secured the area so to speak then it was safe to turn The Titantron back on. That’s why it wasn’t on for the Viking Raiders, but then fifteen minutes it was back working again.”

WWE makes a lot of interesting decisions to reason out their programming. There was a lot going on during RAW last week and Monday could have even more surprises. Because last week Paul Heyman was just getting his first week under his belt as Executive Director. So there is no telling how much influence Heyman will have on this week’s show.