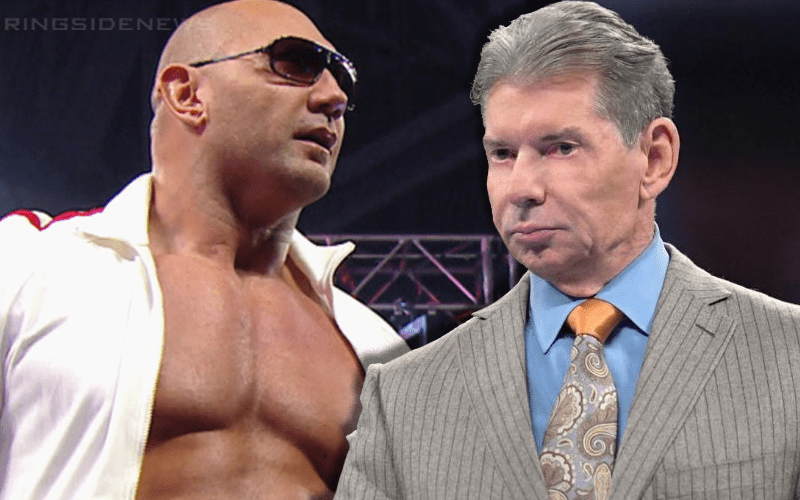 Batista really wanted one more match at WrestleMania against Triple H. He knew it had to be against Triple H because The Game made his career in so many ways. The match was able to finally happen, but not without a fair amount of bugging Vince McMahon.

While speaking to Talk Is Jericho, Batista revealed that he bugged Vince McMahon about having the match that he wanted before he was slated to have surgery.

The Animal said that he and McMahon were having surgery at the same time. This was a perfect opportunity for Batista to pitch a WrestleMania match, but McMahon might have already been on some mind erasing medications. Because when Triple H asked McMahon about his conversation with Batista later, The Chairman Of The Board didn’t remember it going down at all.

“I kept bugging Vince for it. I actually bugged him about it, I saw him we were both having surgery. I had like a hamstring repair a few years back and he was down getting I think his knee repaired. I talked to him about it and he said he was gonna call and he never called and I ended up talking to Hunter later about it and I was a little upset, you know because I told him this match, what about this match at Mania?”

“He said, ‘Yeah we’re really starting to put some thought into it.’ Then I asked Hunter about it and he said Vince didn’t remember the conversation which is fair because he may have been on something because he just had surgery, but then there was another time before that when they were gonna do something on another pay-per-view when they had Stone Cold, Mick Foley, and Shawn Michaels come out and they may have done something with The New Day or I can’t remember what it was. Originally it was supposed to be me and not Mick and I said, ‘I don’t think so man, that doesn’t sound like what I want.’ Hunter was there and I said, ‘When are we gonna start talking about me and Hunter at Mania?’ Again, Vince was like, ‘Yeah, yeah we’re thinking about it, we’ll talk about it’ they just never showed any interest in it.”

They were able to work things out to get Batista at the SmackDown 1000 show after leaving the set of My Spy. The big match at WrestleMania was teased and the rest is history.

It wasn’t easy to make Triple H vs Batista actually happen. Because Triple H also had to recover very quickly from a torn pec that he suffered at the WWE Crown Jewel event. However, it did happen and take it or leave it, that WrestleMania match is what Batista wanted so he could end his WWE career the right way.