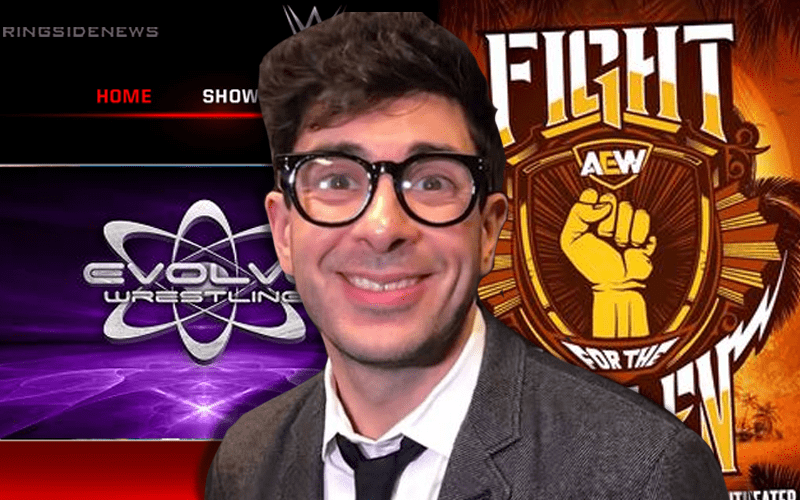 Airing an EVOLVE special on the WWE Network was a long time coming. The company has been discussing airing an EVOLVE special ever since FloSlam started to be a thing. They decided to air their first event on July 13th which worked out because WWE’s crew will be in Philly for Extreme Rules anyway. The timing was not an accident though.

After AEW Fyter Fest, Tony Khan was asked about WWE airing this EVOLVE special opposite to Fight For The Fallen and he had a very diplomatic response.

“We just kind of focus on our shows and what we’re doing. I’m really excited about Fight for the Fallen. Thanks for asking about it because it’s something I’ve wanted to do for a very long time since we conceived All Elite Wrestling because I think it’s really going to make a really positive contribution to my local community in Jacksonville, and I think will wanna come out that day.”

“We’re going to have a very good crowd, and I also think that a lot of people are gonna watch it on TV. And we’re going to be taking donations and trying to help victims of local violence. And I’m a huge wrestling fan, and I won’t be able to watch that show [EVOLVE’s] because we have a lot of things going on of our own. So, I think for a lot of people that’s probably unfortunate, but you know, there’s only so many weekends; and you gotta do your shows when you’re doing ’em. So, what are you gonna do?”

AEW and WWE will probably keep at this battle for as long as they can. The fact that WWE is taking shots at them certainly makes it appear as though they have something to worry about which might not be the best look for them though.

We will have to wait and see what could be next in this new pro wrestling war in the meantime. Because it has already been pretty eventful so far.