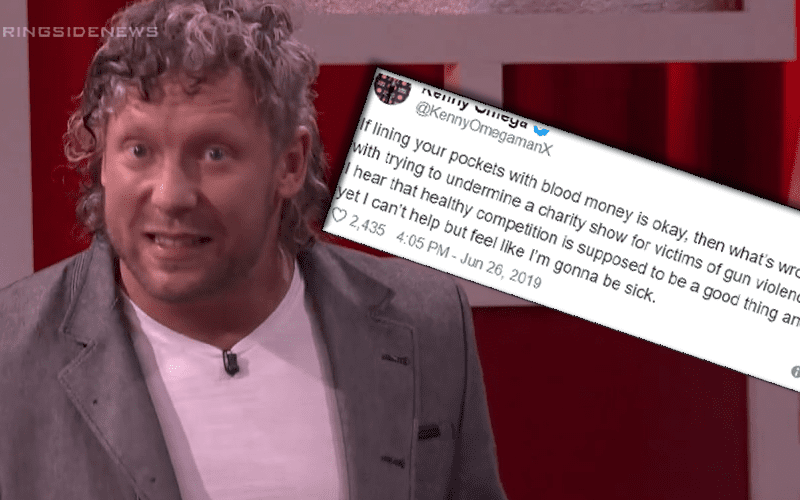 WWE took a pretty big shot at AEW today when they announced that they will be airing an EVOLVE event on July 13th, the same night as AEW’s Fight For The Fallen.

Fight For The Fallen will be a great show featuring The Young Bucks vs The Rhodes Brothers, but a lot of fans might be torn because EVOLVE 131 –Their 10th Anniversary Show complete with an NXT Title Match — will be going on at the same time on the WWE Network.

Fight For The Fallen is also a charity show to benefit the survivors of gun violence. This was enough to make a usually calm and collected Kenny Omega speak up and he went all out in his response.

If lining your pockets with blood money is okay, then what’s wrong with trying to undermine a charity show for victims of gun violence? I hear that healthy competition is supposed to be a good thing and yet I can’t help but feel like I’m gonna be sick.

Kenny Omega deleted the tweet after leaving it up for only a few short minutes. Then he followed it up with:

I’ve said my piece and it opened the door to a very toxic environment. It wasn’t a message to fans, or the boys, just the decision makers. I wish everyone wrestling on any show that day all the best. That is all.

AEW is not happy about this, or at least 1/4 of their EVPs are extremely peeved off. This might just be the first shot of many as WWE just played a big power move. Because even though they didn’t have an event going on they just pulled someone else’s big show and are going to air it on the WWE Network instead.

We will still have compete results from AEW Fight For The Fallen right here at Ringside News.