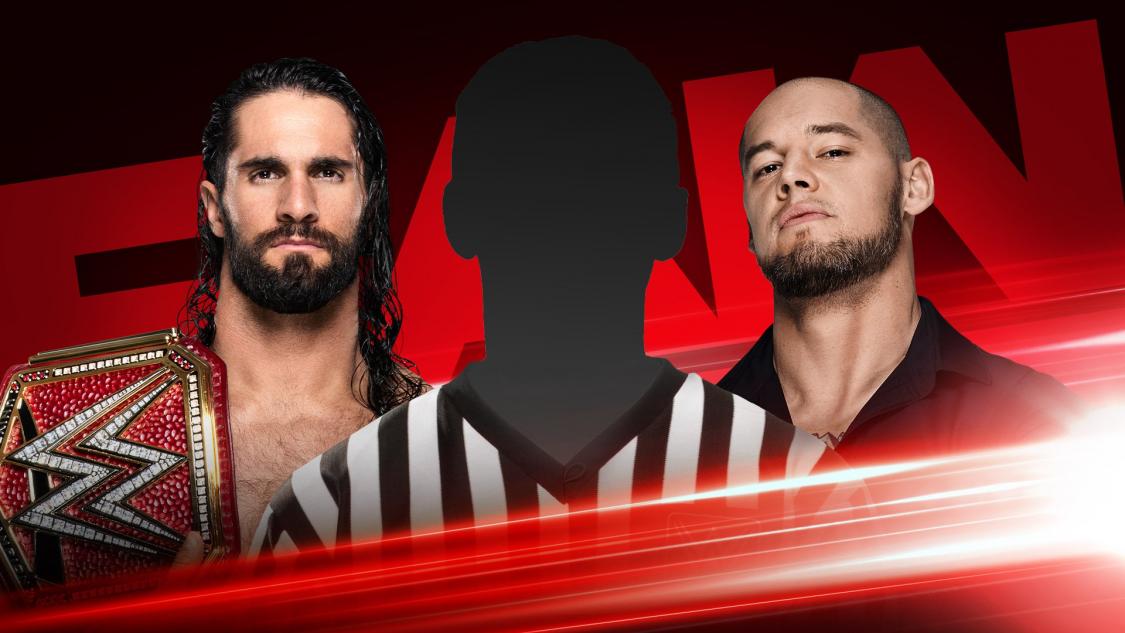 Welcome to Ringside News’ coverage of Monday Night Raw! Tonight’s Raw is set to feature some big match-ups, as well as an announcement.

First, the announcement. Baron Corbin takes on Seth Rollins this Sunday at WWE Stomping Grounds. WWE has announced that there will be a special guest referee for the match but tonight we will get the reveal of who the referee will be. Will it be Shane McMahon as he continues his quest to be in every segment of Raw? Vince as he attempts to boost ratings? Or the return of a legend for the same reason? Only time will tell.

The big match announced for tonight is a Fatal 5 Way to determine the number one contender to Samoa Joe’s United States Championship. The match will feature Braun Strowman, Ricochet, Cesaro, The Miz, and Bobby Lashley. Should be a great match, so long as it gets time to breathe.

Elsewhere tonight there are rumours that Bray Wyatt will appear, which is exciting, as well as more confrontation between Becky Lynch and Lacey Evans, Daniel Bryan as one of the wild cards, and beginning to The Revival’s second title reign.

And that’s the preview for the show. Let us know what you’re excited to see by downloading the Ringside News app or following us on Twitter and Instagram! Enjoy the show!

Raw opens with Elias in the centre of the ring. The drifter begins by insulting a Los Angeles sports star. He says the people in L.A are more toxic than the air.

Who better to kick us off in LA LA LAND than @IAmEliasWWE?! #RAW is LIVE on @USA_Network! pic.twitter.com/7Mj5BAhWnj

Elias then takes off his jacket to reveal a referee’s shirt underneath. He says Baron Corbin asked him to be the special guest referee this Sunday at Stomping Grounds. Before he can go any further though, Seth Rollins attacks him form behind with a steel chair! Rollins beats Elias repeatedly with the chair, before grabbing a microphone.

Rollins says anyone who considers joining forces with Baron Corbin will get the same thing as Elias. He looks at the steel chair and says there will be nothing waiting for Corbin but more of the same, then leaves.

The Miz makes his entrance for the Fatal 5-Way match to find a new No. 1 contender for the U.S. title. Elias has just got to his feet, so Miz hits him with Skull Crushing Finale! Lashley makes his entrance next and he hits Elias with a spear. That’s followed by a Swing from Cesaro, a Codebreaker from Ricochet, and a running powerslam from Strowman. Poor Elias, that was a fun opener.

We’re back and Samoa Joe has come to ringside to watch the action.

Braun Strowman Vs. Bobby Lashley Vs. Cesaro Vs. Ricochet Vs. The Miz

Bobby Lashley returns and hits Strowman with a suplex. However Braun gets back up and hits him with another powerslam for his second elimination. Bobby Lashley Eliminated.

The Monster Among Men runs around the ring to shoulder tackle Ricochet and The Miz. Cesaro and Lashley come back and attack Strowman together, despite being eliminated. Lashley hits him with a Spear as Strowman has Miz on his shoulder. Cesaro hits a Neutralizer, then tells Ricochet to hit his finisher. King Ricochet hits the 630 and Lashley and Cesaro help him get the pin. Braun Strowman Eliminated.

Braun is angry as all hell. He grabs Ricochet and throws him over the ropes and on to Lashley. He then throws Miz and shoves Cesaro into the LED entrance as he leaves. It’s down to The Miz and Ricochet as we head to the break.

We return just in time to see Ricochet his Miz with a hurricanrana. Ricochet jumps onto the apron but Miz yanks his feet and he hits the apron. Miz gets into the ring and looks for a dropkick to the outside but Ricochet dodges it. Ricochet then hits a tope to the outside before getting Miz back in.

Ricochet looks for the 630 but Miz avoids it. Miz looks for the Skull Crushing Finale but Ricochet rolls him up for a near-fall. Miz connects with a snap DDT for a near-fall. Samoa Joe is still there, watching like a lion. Miz hits Ricochet with the It Kicks. Ricochet fires back with a mule kick but his leg is hurting. He looks for a rolling dropkick but Miz grabs the leg and gets him in a Figure Four.

Ricochet is able to reverse the pressure, but Miz reverses it back again, so Ricochet grabs the ropes to force the break. Miz grabs Ricochet and looks for the Figure Four again but Ricochet rolls him up for a near-fall. Miz goes to the apron and leaps for a springboard axe handle but Ricochet catches him with a botched Codebreaker. Ricochet then drags himself up the ropes and hits the 630 for the win!

Of course, as soon as the match is over Samoa Joe comes into the ring and attacks Ricochet. Joe stomps him down, then runs at him but Ricochet pulls the ropes and Joe flies over to the floor. Ricochet follows-up with a tope to Joe. Ricochet gets back in the ring and poses. They will go toe-to-toe for the United States Championship on Sunday!

We see a picture from the MTV Movie Awards, where Seth Rollins Becky Lynch went as boyfriend and girlfriend. Lynch makes her entrance to a nice reception. She asks Evans to come out now, then carries on and says she has to listen to Evans week after week. Next time she comes within striking distance of The Man though, she’ll take her out. She says she’ll do the people of “Los Angeleez” a favour by kicking her ass all over the city.

Evans makes her entrance and says nobody cares about Becky Lynch. She says Lynch has it all wrong: she makes Lynch mad because she doesn’t understand her. Lynch says she understands that Evans would rather stand on the stage and talk slowly than come to the ring and fight.

Evans says that Lynch sees her as nothing more than a pretty dress, a classy hat, and a flawless figure, but she’s been through more than Becky can imagine. Lynch asks if this is the part where Evans tries to pull on her heart strings. Evans says this is tinsel town, and they should make a movie about her. Because unlike Becky Lynch, she’s actually a marine. Lynch says she knows Evans’ story and that makes her all the more confusing; why would a marine attack from behind? Lynch says she respects who Evans was and what she did but who she is now is pure trash. Evans rambles on for a minute about being what the woman’s division needs and how this Sunday she will take the title and bring dignity to it. As she’s climbing into the ring Lynch grabs her and hits the Bexploder. Lynch then grabs her fancy hat and adorns it as she leaves up the ramp.

You step into the ring with #TheMan @BeckyLynchWWE, you better be ready to FIGHT. #RAW pic.twitter.com/qDqwwDixvD

The camera then pans from the arena backstage, where we find The Revival walking with their titles and wearing nice clothes. They find Shane’s lounge and walk in to find McMahon and McIntyre drinking champagne.

Charly Caruso is backstage with Baron Corbin, and she asks about Rollins attacking Elias. She says Elias is no longer going to be the referee on Sunday. Corbin says what happened happened, but he’s a very important guy and he has lots of friends. He will reveal who the new referee is later tonight on the Kevin and Sami Show. Caruso runs and Corbin turns around to get him by a chair from Seth Rollins. Rollins kneels down and says he would offer Corbin a seat but he has more work to do.

The Viking Raiders will be in action, next!

Daniel Bryan and Erick Rowan, the planet’s Tag Team Champions, come out onto the stage. Bryan says he understands why he was asked to be the wild card tonight, because both Raw and Los Angeles sucks. He says LA is the smog capital of America and it’s full of ignorant and impotent people. However he and Rowan are here to life them from the smog and excite them. And tonight he will do just that by destroying Seth Rollins. In doing so, he will show Raw that he and Rowan are the greatest tag team in history.

The bell rings and Erick hits Rusty with a dropkick, then pulls Randy into the ring and hits a belly-to-belly. He tags Ivar, who springboards off the ropes and hits a spinning clothesline to Randy. They hit Rusty with the their finisher and that’s that.

The camera shows the fans at ringside but Carmella and R-Truth were sitting there, disguised. Suddenly all the jobbers come running down and Truth slides under the ring. They can’t find him and accidentally pull Titus out from underneath. Eventually Truth and Carmella come out the other side. They’re chased through the crowd and to the back.

Sami Zayn, Kevin Owens, and Baron Corbin are backstage, comparing notes. The Kevin and Sami show will be next.