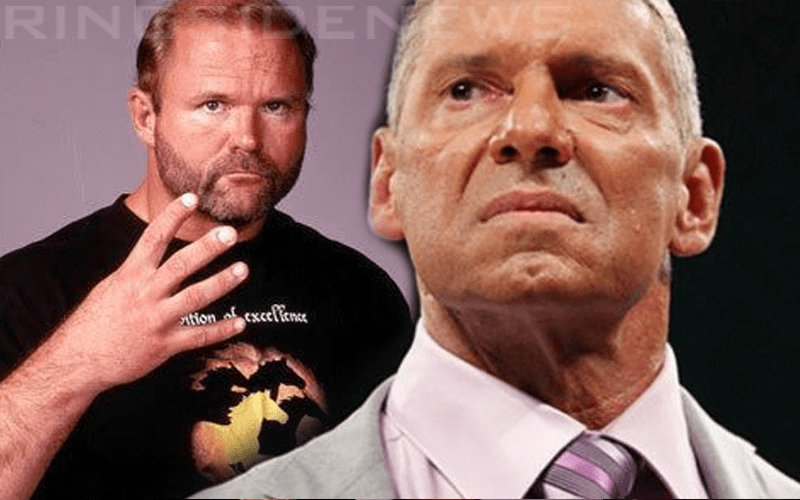 Arn Anderson was released from WWE after he allowed Alicia Fox to wrestle at a Michigan live event while she was intoxicated. He didn’t know there was anything wrong which was echoed by other Superstars who didn’t notice anything out of the norm for Fox’s erratic behavior. However, he was still let go after being screamed at by Vince McMahon.

During Starrcast, Anderson said he signed a non-disclosure agreement with WWE so he can’t speak about why he was fired or the events surrounding it. However, he was around AEW Double Or Nothing. He just wasn’t at the event.

Although Double A might be a perfect fit for All Elite Wrestling, he commented to the Two Man Power Trip That he is still legally bound to WWE at this time.

“I didn’t go to the show [AEW Double Or Nothing] because I didn’t want people to mistake… I just want to be clear I do not work for AEW. We haven’t had that discussion as of yet not to say that I wouldn’t be honored somewhere down the road to be offered a position with those guys.”

“We just haven’t had the conversation because right now quite frankly, I’m legally bound to a non-disclosure agreement and for a few more month I’m still going to be on a severance package [from WWE] so I can’t talk to anybody about anything as far as going forward, but that being said, I was so excited for them it might as well have been that I was working for them because I sure was pulling for them every step of the way and they paid it off.”

Anderson was in the green room before AEW Double Or Nothing and he witnessed the excitement first-hand. He commented about seeing the leadership roles in the company being taken up by stars like Cody Rhodes as they find footing with a new pro wrestling family.

However, Anderson didn’t go to Double Or Nothing. Therefore, if Arn Anderson is AEW bound it will have to wait for a bit.