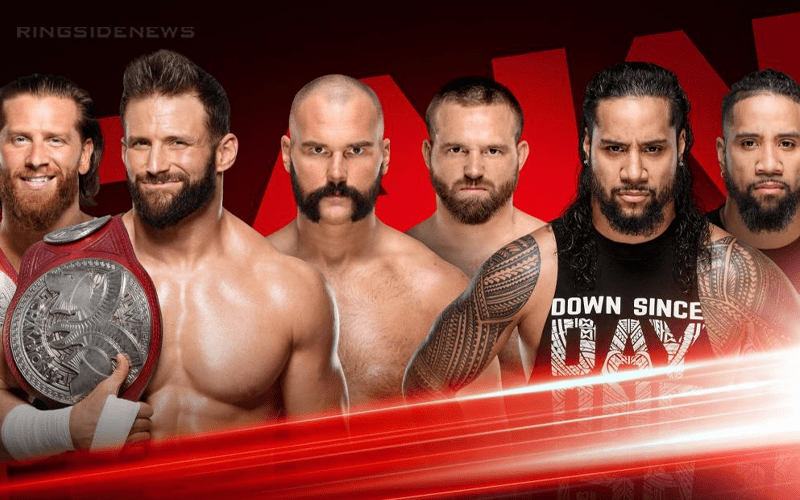 Welcome to Ringside News’ RAW results. Keep refreshing this page when the show kicks off at 8:00 PM.

This is Felix filling in for Curtis this week because he got tickets to the NBA Finals tonight. That might be a very telling sign of WWE’s hope of popping a rating for this show.

RAW will feature a triple threat tag team for the RAW Tag Team Titles with Ryder and Hawkins taking on The Revival and The Usos. That should be fun.

We are also going to get a WWE Super ShowDown rematch this week as Lars Sullivan will take on The Lucha House Party. That should be interesting and maybe they’ll use the original booking they had in place for the Saudi show before Vince McMahon changed it.

There will be a Miz TV with Samoa Joe as well so maybe we’ll see someone step up to him so he can get on the Stomping Grounds card.

Lacey Evans is expected to confront Becky Lynch and Seth Rollins is going to be very happy that he’s still the WWE Universal Champion.

Also, Shane McMahon is going to celebrate with Drew McIntyre after beating Roman Reigns in Jeddah.

All that and more is expected, so check back at 8:00 PM when things kick off.

Seth Rollins came out and they played highlights from his Universal Title match at Super ShowDown. So they aren’t ignoring the Saudi Arabia show at all.

Rollins had a bent-up chair presumably bent over Lesnar’s back. He said the RAW locker room can try to out wrestle him (but there’s not a person on the planet who can lace his boot). He bragged about what he did to Lesnar at Super ShowDown. He said it felt pretty damn good laying a chair into Lesnar over and over again.

Then Baron Corbin walked out. He got booed a lot and he said the feeling is mutual with the people of San Jose. He said, “it’s fine, I’ll wait,” but they kept going and it escalated into “you suck” chants. Then he baited them into going more by asking if they were done. He started to talk, but gave them a chance to boo him again by pausing. Then he insulted the crowd again to keep them going. Classic crowd manipulation.

Lesnar was finally able to get out that he’ll win the UT at Stomping Grounds. Rollins asked him how that went at Super ShowDown and Corbin blamed it on the referee for causing him to call.

Corbin says he gets to handpick the referee at Stomping Grounds. Sami Zayn came out next who is a man that just started a charity to raise money for medical supplies for Syria… SUPER HEEL.

The crowd booed Zayn as he talked about a swirl of toxic masculinity going on right now. He said it would be better for Seth if Corbin was champion and better for RAW in general.

Seth implied that Zayn had an underlying reason for saying that and Sami let it slip that Corbin would give him a title shot. Seth threatened to slap the taste out of his mouth and he asked who has Sami’s back. Then Kevin Owens came out saying that he has Zayn’s back.

So Rollins booked his own match for the main event: Rollins vs Owens.

Sullivan started destroying Kalisto first and he took him out with a powerslam. Then he pinned Kalisto.

Then Lince Dorade tried his luck with some kicks, but Sullivan didn’t sell much. He caught Lince in a hurricanrana and hit a running powerbomb for a pinfall.

Gran Metalik didn’t last long either, but Sullivan pulled up his shoulder so he didn’t let the pinfall happen. He just wanted to apply more punishment.

Lars went outside and he launched Kalisto into the steel steps before returning to hit Metalik with another slam, but he didn’t allow the pinfall.

Then Sullivan went outside and picked up Lince Dorado to launch him into the ring post. Then Sullivan climbed up and hit that dangerous top-rope headbutt for the win. He shouldn’t be doing the headbutt.

R-Truth and Carmella were running away and then everyone got on the elevator and he got away. They showed security footage from the elevator. He was in there with Mella, EC3, Heath Slater, Cedric Alexander, and Drake Maverick. Everyone was stuck in the elevator with no referee.

They showed Seth Rollins with Becky Lynch backstage talking and Michael Cole flat-out said that Rollins is her boyfriend.

Cole interviewed them on a split-screen. Evans interrupted him and said where she comes from ladies go first. Then Lynch brought up how Evans already tapped out to the Dis Arm Her.

Evans said don’t pretend that we know anything about her and she won’t stop until she has everything she wants. Lynch said dirt and gold are found in the same place and it doesn’t make them equal. Lynch said that being the champ is her obsession and she will overcome Lacey Evan.

The Lady Of WWE said The Man had a cute speech and then she said what drove her is her fear of losing it all and going back to obscurity. She called the fear nasty and at Stomping Grounds she will become Becky No Belts.

Then they decided that they won’t waste any more time talking to each other.

So if they didn’t bring up that Rollins her Lynch’s boyfriend why did Michael Cole even bring it up?

Alexa Bliss and Nikki Cross were backstage and Bliss called Bayley a master manipulator. She knows the real Bayley. She said Bayley was awful to her in NXT and she would make you feel so alienated. Then Alexa blamed Bayley for her being so mean.

Bliss said she can be herself around Cross and then they hugged. That’s turning into something adorable until Bliss undoubtedly turns on Nikki Cross.

The Miz was walking to the ring and getting ready as they cut to commercial break.

They aired a commercial first with The Miz about being a dad. It was one of the new “be a dad” spots WWE did and The Miz is dancing with Monroe. I wonder if they did that on purpose.

When they came back from commercial they aired a Super ShowDown spot and Michael Cole said that WWE is cross-cultural even in Saudi Arabia.

The Miz introduced Samoa Joe and didn’t get much time at all to be a babyface on the microphone.

Joe cut Miz off and said he’s pushing the wrong narrative because there’s nothing new about his championship reign. Mysterio stole his title and Joe got it back.

Then The Miz ran the tape back from last week when Joe choked out an injured Mysterio. Joe loved seeing that. The Miz said Mysterio was honest, but Joe still felt like slapping on a Coquina Clutch. “Yeah, so?” Joe said.

The Miz brought up how Joe threatened Dominick as well which is a line you shouldn’t cross to bring in a man’s kids. Joe said there’s no such thing as too far.

Joe said he thought he was out to talk about a new challenger for his US Title, but maybe he’ll talk about The Miz’s family. The A-Lister stood up to Joe and then Braun Strowman came out.

Braun told Joe to shut his mouth and get these hands. Before anything could happen, Bobby Lashley came out pointing in both directions like he does. He’s not done with Braun yet. He said he has history with Joe so he deserves a shot at the US Title.

Then RICOCHET CAME OUT. He said everyone’s out there saying who’s bigger or stronger, “and obviously that’s not me,” but he wants to win his first championship. What weak verbiage. Then Cesaro came out and sucker-punched Ricochet.

All hell broke loose as everyone partnered up and the babyfaces chased the heels out of the ring. I smell a six-man tag.

Braun laid some damage to Bobby Lashley before tagging The Miz who was taken down by Joe with a clothesline while the referee’s back was turned. Then Joe took the tag again to lay in some fists in the corner to The A-Lister.

Cesaro got tagged in and the latched on a headlock to The Miz until he was able to fiht out of it. Ricochet got the tag and he ran around the ring pulling Lashley off the apron and kicking Joe from the apron before jumping in to hit flying cross bodies and a spinning head-scissors on Cesaro followed by a dive over the top rope to the floor.

When we came back from commercial Ricochet was getting hammered after Samoa Joe took his head off with a lariat during the commercial. Might have been nice to have seen that.

Lashley drove Ricochet into the barricade and then when they made it back to the ring Ricochet shot back with a dropkick on Lashley and tagged in The Miz who started lighting Lashley up with Yes Kicks and two running double knees and a running clothesline. Then Lashley ran at Miz, but he missed. Miz hit Lashley with a DDT and then Cesaro before teeing off with more Yes Kicks on both heels.

Lashley caught The Miz and sent him down face-first. Joe took the tag and hit a senton for a two count until Strowman broke up the pinfall.

Lashley distracted Braun on the outside as Cesaro took The Miz swinging. Then Cesaro locked on a sharpshooter, but Ricochet nailed Cesaro with a dropkick. Braun took the tag and started cleaning house.

Cesaro took several powerful moves from Strowman until Joe broke up the pin. Braun picked up Joe, but he got away, took his title and ran off.

Lashley nailed a spear to Lashley and Ricochet hit a dive. Then The Miz hit a Skull Crushing Finale. Ricochet took the tag and hit his splash for the win.

Ricochet landed on Cesaro’s wrist and knee. Officials had to help him to the back.