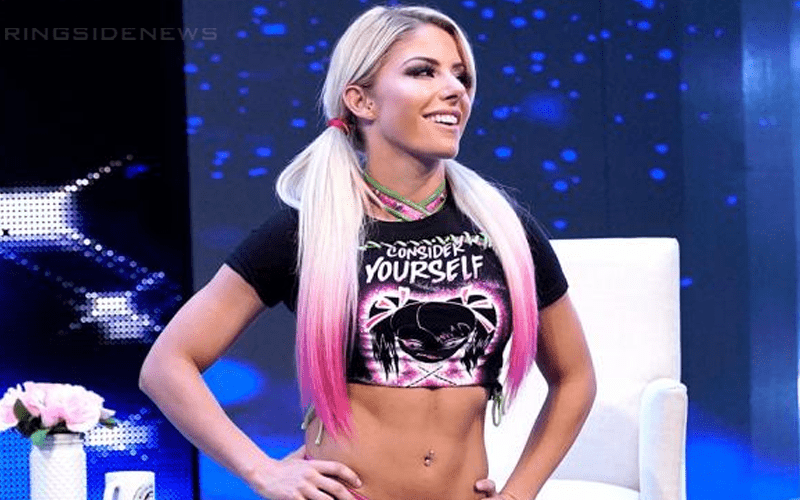 Alexa Bliss won a #1 contender’s match on WWE SmackDown Live this week. Now she will face Bayley for the SmackDown Women’s Title at Stomping Grounds on June 23rd. However, Bliss is just coming off of an injury and is getting inserted right into a big match situation.

It is interesting that Alexa Bliss was called over from RAW to challenge Bayley for her title as well. If Bliss is able to win the title this could possibly change a fan-favorite story arc with Bliss and Nikki Cross on the red brand.

During Wrestling Observer Live, Bryan Alvarez discussed Alexa Bliss’ history of concussions and she’s had a lot of them recently, far more than she should have.

This doesn’t seem to change the fact that WWE keeps using people as soon as they’re cleared without giving them time to make a slower transition back into the ring. Maybe that might be the best tactic to take from this point on.

“I could be wrong, but I’m pretty sure there’s been at least three [concussions] this year and I’m pretty sure these weren’t the first three. So the thing that bothers me. The reason this bothers me is the way that WWE does their concussion and injury protocol is you’re cleared or you’re not cleared.”

“So if you’re not cleared you don’t do anything. If you get cleared even if you’re just coming off a massive concussion you’re all in. If they want you in a ladder match, you’re in a ladder match. If they want you in a TLC match, you’re in a TLC match. To me this is ridiculous. Like if she’s coming off of a major injury maybe she shouldn’t be wrestling right now.”

“I realize the thing says ‘cleared’ but to me it’s not a pass/fail. It’s like ‘You’re cleared? Maybe we should ease into this whole wrestling,’ but that’s not the way they do things. I think that should change.”

Hopefully, getting right back into the ring won’t cause another injury for Alexa Bliss. She has a bright future ahead of her in WWE, especially if she can keep from getting hurt again.

Concussions are nothing to take lightly and WWE is really cracking down on them. However, it doesn’t seem to do much good if they send them right back into the same level of intense action right after healing up just to risk another injury right off the bat.