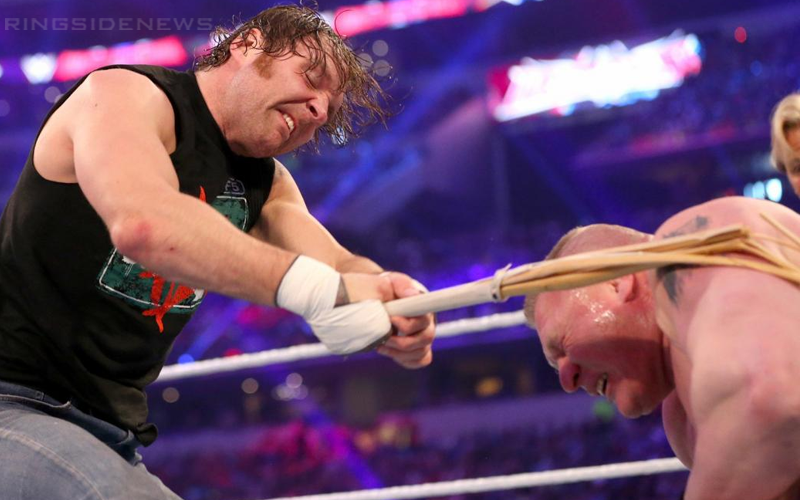 Dean Ambrose went through a lot of frustrations in WWE that Jon Moxley will never deal with in AEW. One of those issues likely has a lot to do with Brock Lesnar.

While speaking to Wade Keller’s Pro Wrestling Podcast, Moxley really laid everything out as to what happened before WrestleMania in Texas with Brock Lesnar. This is a match that Steve Austin specifically brought up during his podcast with Ambrose at the time and there were obviously some issues there. Now Jon Moxley can talk as much as he wants about it.

The former Dean Ambrose had all week to prepare and get a match in mind. However, just because he could get stuff figured out didn’t mean he would actually get to follow through with any of those plans.

”At WrestleMania you have like rehearsals, they have rings in the hotel so you don’t have to do it on the day of. You put together your match and kinda try stuff out because everybody wants to steal the show at Mania, you put in maximum effort.”

Mox had a great match planned that could have been the match of the night, but it just didn’t happen because Lesnar didn’t come ready to play with Ambrose.

When the time came to talk to Lesnar about their match via a conference call, he didn’t receive the best answer.

“I mean I don’t think we need all that stuff, all that extra gimmick stuff it’s just simple story. Look, we go to Suplex City, you get your hands on a weapon, you know your comeback.”

“We start talking about the match for the first time while like the second match is going on, I think it was a ladder match. We don’t have a finish, he doesn’t want me kicking out of multiple F5s, and like at WrestleMania everybody kicks out of like five F5s cause he only does German Suplex and a F5.”

Moxley had some great ideas that could have popped the Dallas crowd and brought a huge amount of drama to the match. He wanted to give Lesnar the finger while in a chokehold after being thrown into a pile of thumbtacks. Ambrose was game to get busted open hard-way with Lesnar’s elbow like he did with Randy Orton during SummerSlam ’16.

Moxley also had an idea that would have made Lesnar look like an absolute beast if he could spray Brock in the eyes with mace before the match started just to have him come through victoriously.

Ambrose even had a great idea that he could start using a heel hook submission as he wanted to train at Frank Mir’s gym.

In the end, the match was what it was, but it could have been so much more.