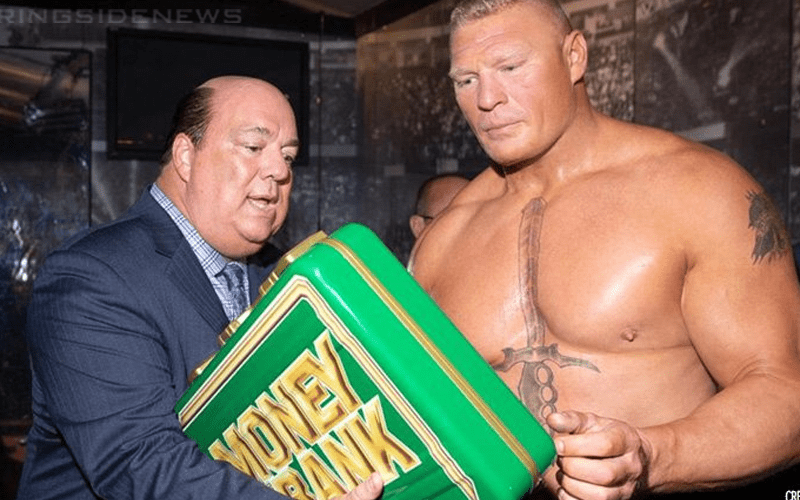 Brock Lesnar showed up on RAW this week and he had a new spring to his step. His Money In The Bank briefcase was made to look like a boombox and he was loving his time in the ring as he toyed with fans and WWE’s top champions.

Dave Meltzer discussed how the “Brock Party” idea came about organically on Wrestling Observer Radio. However, no matter how much fun the Beast In The Bank is having right now likely won’t change the fact the he still has a Brock Lesnar schedule.

“That was really good stuff. That was like one of those things that was one of those accidents where he just held the briefcase like that like a boombox and people all over social media picked up on it and they just went with it.”

“Brock was tremendous. It was almost like it was a reinvention of Brock to a degree. When I was watching it I was like Brock could get over as a pretty cool character the only problem is he’s supposed to be a heel, but also he’s got very limited dated. So whatever Brock does to get over the fact is that in three weeks that’s not going to really matter because once this next pay-per-view in Saudi Arabia is over you know is Brock even going to be around until a couple of weeks before SummerSlam?”

Because that’s the usual schedule. He’ll do Saudi Arabia and he’ll disappear and maybe he’ll come back and do a couple TV [episodes] to build up his SummerSlam match and then he’s gone until whenever Survivor Series or one of the big shows during the year.”

Brock Lesnar might have been able to cut loose a lot on RAW, but it is still very expensive to get The Beast Incarnate to show up to work and he has a very limited contract when it comes to appearances.

So enjoy the dancing and smiling version of Brock Lesnar while you can because no matter what they do it’s not likely he will be around any more often than he was before.