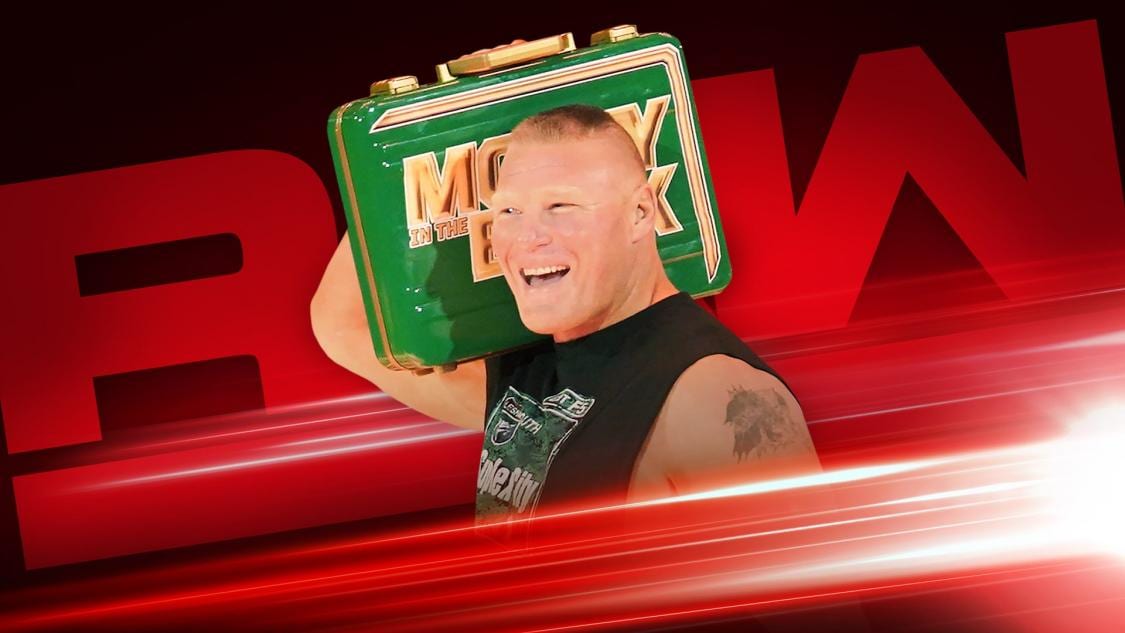 Tonight’s show is set to feature Brock Lesnar announcing whether he will be hunting Kofi Kingston or Seth Rollins with his Money In The Bank boombox. That’s pretty much all we know as of now, but for the love of all things interesting, have it be Kofi and SmackDown Live.

WWE.com is also teasing that there will be an announcement regarding the United States Championship situation, following the controversial finish to Samoa Joe Vs. Rey Mysterio at Money In The Bank. Surely this will lead to both men getting a two-out-of-three-falls match that lasts longer than 5 minutes.

Elsewhere, the new 24/7 Championship belt is set to continue changing hands tonight. Look, the belt is ugly af, there’s no denying that, but it’s a fun concept that can keep the show feeling a little less predictable. The biggest thing WWE has to do though, is to have guys like Roman Reigns and Drew McIntyre want it as well. It’s not enough to have R-Truth and Jinder Mahal chasing after it, why not have Roman knock someone out with a Superman punch backstage and take it for himself. It gives the belt some gravitas if it isn’t just for jobbers.

And that’s basically the entire preview for tonight’s show. Honestly, there’s not a lot happening right now, and that fact seems even more magnified followed the extreme hype around AEW’s Double Or Nothing show. However competition is a good thing, and here’s hoping it inspires WWE to get out of this infernal rut it’s been in for a year now. Remember to follow us on Instagram, download the Ringside News app, and enjoy the show!

We see Brock Lesnar and Paul Heyman standing backstage, all smiles. Brock lifts his Money In The Bank briefcase and leaves the room.

The New Day’s music hits and Kofi Kingston makes his way to the ring alone. As the WWE Champion makes his way to the ring, we see a video replay of Dolph Ziggler laying out Kofi on SmackDown Live last week. The fans chant his name and Kofi says he loves everyone. He says last week Kevin Owens took out Big E and re-injured his knee, then he was attacked by Dolph Ziggler. He says Dolph Ziggler tried to end him, but it didn’t work because he’s still here. And when the time is right, he will address Ziggler, but tonight is not that night. He’s here for Mr. Money In The Bank. He says he considers himself a fighting Champion, and wants to be the best of all-time, and he can’t think of a better way to do that than to beat Brock Lesnar. So he wants Brock to come out here right now and cash-in.

Seth Rollins answers the call instead. Rollins says he knows he’s not Brock Lesnar… he’s better. But he likes where Kofi’s head is at, he doesn’t want to wait any longer. He says all we’re missing is Lesnar to come out and make his decision.

The Beast’s music hits and out he comes with Paul Heyman. Although his music changes halfway through to a dancey track and Brock pretends to dance to it with the briefcase. The briefcase has even been redesigned to look like a boombox – he obviously isn’t cashing in, anytime soon. Brock gets into the ring and does a little dance and it’s so weird to see. New Day’s music then comes on and Brock dances to that whle looking at Kofi, then Seth’s music hits as Brock looks at him. Paul Heyman goes crazy with some air guitar and Brock tells him to stop. This is the weirdest thing I’ve ever seen. Rollins drops his mic and walks off.

Kofi holds his title up and talks trash to Lesnar as the music finally stops. Heyman says it’s just like Rollins to pee on everybody’s parade. He says his client was about to choose who he would cash-in on, but Seth Rollins ruined the Brock Party. Heyman says not to blame Brock, but to blame Seth Rollins. Brock and Heyman then leave, but Dolph Ziggler attacks Kofi from behind!

Ziggler knocks Kofi from the ring and hits a Zig-Zag on the ramp. Ziggler grabs a chair and is about to hit Kofi when Xavier Woods comes out and attacks Dolph, sending him scurrying through the crowd.

We return from the break and Woods is helping Kofi up the ramp with some officials. Ziggler comes running back out and attacks Woods. The two brawl on the stage, before Woods drags Dolph down to the ring. Woods unloads shots on Dolph but gets thrown from the ring. Ziggler rakes the eyes of Xavier, then tosses him into the barricade.

Woods fires back and throws Ziggler into the timekeepers area. Woods jumps off the barricade with a double axe handle to Dolph, then throws him over the barricade and into the crowd. They brawl through the crowd, then back to ringside. Dolph slams Woods’ head into the steel steps. Ziggler grabs a steel chair and cracks it over the back of Woods, then again.

Woods rolls into the ring and Dolph follows, hitting him with the chair again. Ziggler puts Woods’ head inside the chair and is about to stomp on it but Kofi comes running back down with a chair and makes the save.

We’re back from the break and Kofi and Woods are in the ring, helping each other stand. Dolph Ziggler strolls out onto the stage. He says he felt like he knew Kofi, but the Champion has been wasting all his time on Brock Lesnar cashing in. He should have been worrying about him, because in 11 days he will be defending the belt against him. He says he needs Kofi to do one thing for him: celebrate. Celebrate like he’s never celebrated before for 11 days, because he’s a phenomenal Champion, but everytime he looks at him with that title he knows it should have been him. And he’s envious of Kofi, because since day one he’s had friends who would watch his back. And when people said Kofi was B-plus, he defended him because he knew he wasn’t. But what happens when he takes that Championship from Kofi? What happens to the millions of fans when he takes the belt from him? It should have been him, but at Super ShowDown, it will be.

Still to come tonight, Becky Lynch and Nikki Cross face The Iiconics. Also, there will be a Fatal 4-Way match to determine the number one contender to Seth Rollins at Super ShowDown.

The camera cut backstage and there’s a big Memorial Day BBQ happening, hosted by The Uso’s. They grab the mic and wish a happy birthday to Natalya, then thank everyone for joining them, minus The Revival.

We see Shane McMahon shadow-boxing backstage. Charly Caruso approaches and says he’s competing tonight but that’s out of the ordinary. Shane says he has Roman Reigns in 11 days, so he’s trying to stay sharp. He turns and Drew McIntyre is with him, they walk off and out to the ring. Shane stops halfway down the ramp though, then instructs McIntyre to follow him to the back again.

The commentators send us to a lengthy video package hyping the Triple H/Randy Orton rivalry. The two will face-off again at Super ShowDown.

It’s ALWAYS been personal for @TripleH and @RandyOrton.

Shane and Drew are in the ring when we return. Shane says the McMahon family and the Samoan dynasty have a relationship that goes back a lot longer than himself and Roman Reigns. Shane says he was raised with great respect for that relationship and for all Samoans, but it’s clear that much isn’t true of Roman Reigns. He says if it were true, Roman wouldn’t have attacked Vince McMahon. He names off some great Samoan wrestlers and says he grew up knowing Roman Reigns’ family. He had a front row seat for all their greatest achievements…and faults. He says he won’t disparage the Wild Samoans because that’s not in his DNA. He says Vince was always there to clean-up the mistakes of the Samoan dynasty. With all that being said, there’s someone from the Samoan Dynasty going to face him tonight. Shane sets the mic aside as we head to a break.

Shane’s opponent has arrived: Lance Anoa’I. According to Corey Graves, Lance is Roman’s cousin and a future star from the Samoan dynasty.

The bell rings and Shane tees off on Lance, punching and kicking him into the corner. The kid starts fighting back but Shane knees and punches him again. The fans start chanting “this is awful”. The kid punches Shane against the ropes, then hits a beautiful dropkick.

Lance lines-up a superkick but Shane grabs the leg and hits a nice spinning elbow that floors him. Shane applies the head triangle and Lance taps out.

Shane grabs a mic and asks Lance “how dare you hit me like that?” He instructs Drew to lift him up, then he attacks him, before applying the triangle again. Shane says if Sika (Reigns’ father) were here right now, the exact same thing would be happening to him. And that the worst thing Sika ever did was spawn Roman.

Speak of the devil, Reigns comes out and floors Drew on the ramp with a Superman punch. He then comes into the ring but McMahon retreats. Roman chases after him and hits a Superman punch off of the steps. Roman gets Shane back in the ring and is about to hit a Spear when Drew pulls Shane from he ring. Shane and Drew leave as Roman tends to his cousin.