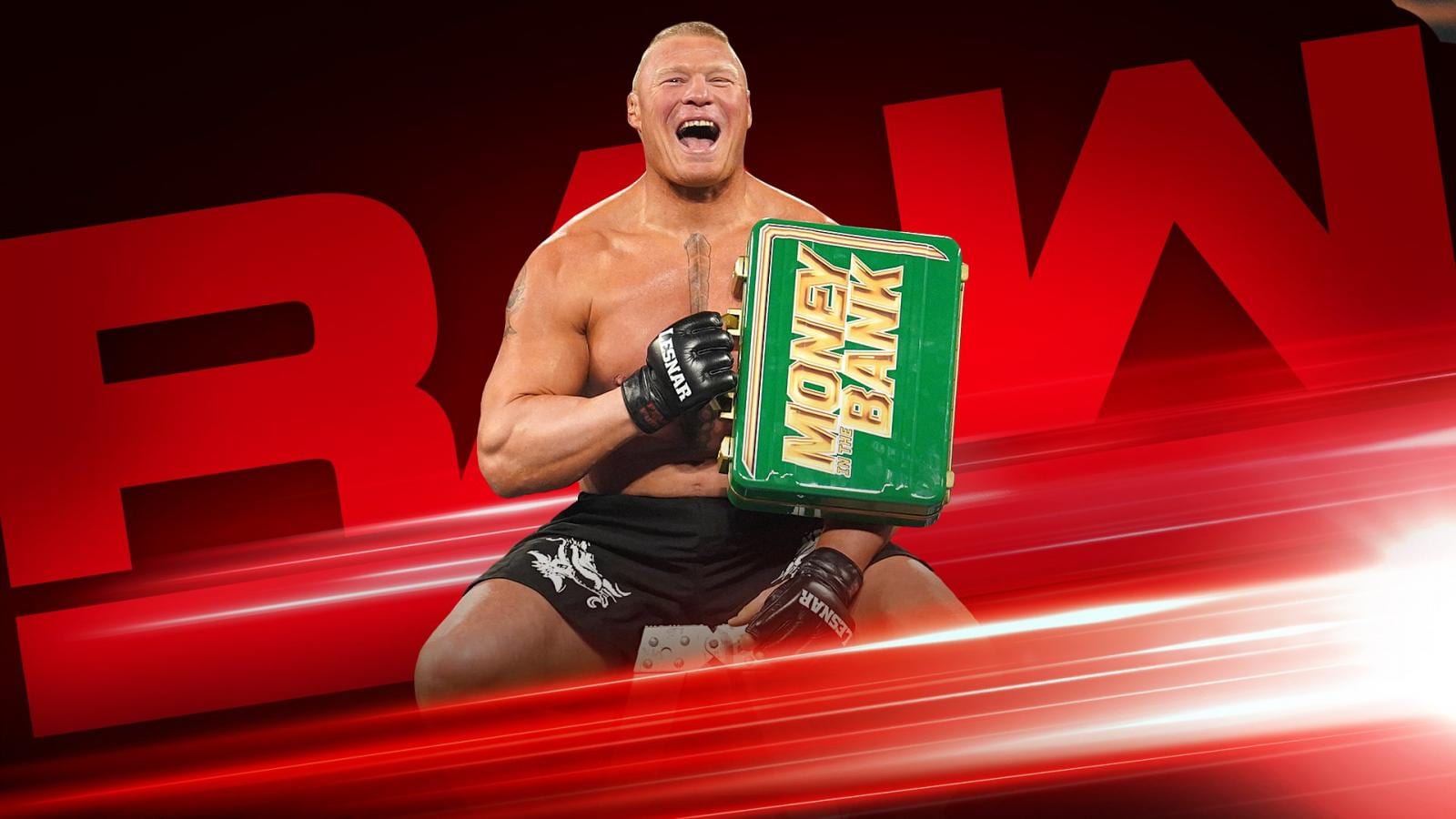 Money In The Bank was last night and… it was certainly a show that took place. All bs aside, it was a damn solid show with a handful of the best matches of the year so far. Of course, the hot topic coming out of the show was Brock Lesnar winning the men’s briefcase. Lesnar shocked everyone when he showed up in the final minute of the match, took out Mustafa Ali and unhooked the briefcase. Lots of people weren’t happy about this because it sets up another potential Lesnar title reign, as well as just more Lesnar. Well, The Beast is said to be on Raw tonight and he’ll likely shoot a warning at WWE Champion Seth Rollins.

Speaking of whom, Rollins defended the Universal Championship against AJ Styles in a true barn-burner last night. It seems like that was a one-and-done feud, so who does Seth face now? Perhaps Brock at Super Show-Down? Or maybe another short-term opponent like Baron Corbin or who knows, perhaps it will be a Wild Card player like Daniel Bryan.

The other huge news to come out of last night’s show was that Mick Foley will be on tonight’s Raw to introduce a new Championship belt. This came completely out of nowhere and seems a tad unnecessary considering how inconsequential the Cruiserweight Championship, US title, and Women’s Tag belts have been. Well, it seems everyone is hoping it will be the reintroduction of the hardcore title, but it seems equally as likely that it could be a mid-card women’s belt, a European title, or something new and weird like a Galaxy title. Who the hell knows anymore?

And then there’s Becky One Belt. That’s right, Becky lost her SmackDown Live Women’s Championship to Charlotte Flair last night, largely thanks to interference from Lacey Evans. Of course, Lynch had just beaten Evans who was, in turn, quite bitter. This allows Lynch to just move over to Raw permanently and feud with Evans for the Raw title…we hope.

And that’s the preview for tonight’s show. If nothing else, the fallout from last night’s PPV should make it a decent watch. Let us know what you’re excited about in the comments, and remember to download the Ringside News app, follows us on Instagram and Twitter, and enjoy the show!

Raw opens with Mr. Money In The Bank, Brock Lesnar, and Paul Heyman coming to the ring.

We see highlights from the main event. Heyman introduces the two of them as the fans boo. Heyman says there has been a conspiracy theory that he and Lesnar hatched their plan after Sami Zayn was hung-up during the show. He says Brock can’t be snuck into a building. He acts as though they couldn’t possibly have hurt Sami, then used politics to get Brock into the match. Heyman says if he were Kofi Kingston or Seth Rollins, he would be incredible paranoid right now. And that’s because they are being hunted by the greatest assassin of all-time in WWE. He says if he were Seth Rollins he would be terrified that Brock was about to strike at any given time.

Seth Rollins comes out to interrupt Heyman. Rollins comes to the ring and grabs a mic. He says he should be ecstatic after having the match of his life against AJ Styles. He’s not in a great mood though, because he has to see Brock with the briefcase. He says let’s cut to the chase, he’s trying to be the Champion that Brock never had the guts to be. He can’t do that however, if Brock has that briefcase. So how about Brock be a man and cash the briefcase in tonight and they go toe-to-toe. Heyman gets in between them and tells Seth he has to play Brock’s game. Heyman says he has to play the anticipation game, which he should know all about because he had to wait years to main event WrestleMania…and even then he had to watch his girlfriend main event it. Seth gets angry and shoves Brock and they start bickering.

Heyman separates them again and says who knows if Brock even wants Seth Rollins, perhaps he wants Kofi Kingston. Just then, the WWE Champion shows up and makes his way down to the ring also. Kofi screams “wild card” as he gets in the ring. He tells Seth he isn’t trying to steal his thunder, but he’s trying to cement his legacy and have himself remembered as an all-time great Champion. But he can’t do that unless he beats the best, night-in, night-out. Kofi then congratulates Brock and says if he’s going to cash-in, he wants it to be for his title.

Heyman says he just realised that WWE’s top two Champions are bargaining for the chance to face Lesnar, Mr. Money In The Bank, Mr. Box Office. However, he has it on good account, both Seth and Kofi are in action tonight. Meaning Brock and the contract aren’t going anywhere, so stay tuned.

We see a car pull up outside the arena and out steps New York’s Mick Foley, holding the new title in a bag. He’s greeted by lots of B-list wrestlers.

Next, Sami Zayn is in Gorilla with Bobby Lashley and begging for help as he’s scheduled to face Braun Strowman next. Lashley has no interest in helping him, and Sami walks to the ring like a man headed to the gallows. We see a live clip of Braun backstage staring into the camera and snarling. Weird.

Kofi and Seth are walking backstage and they approach Triple H. He says they were both very impressive last night, so tonight they’re teaming to face the never-ending duo, Corbin and Lashley.

Before the bell can ring, Sami leaves the ring. Strowman chases after him and they run through the crowd and into the back. We cut backstage and somehow Strowman has lost Zayn, even though he was right on top of him heading to the back.

Braun meets Lashley and shares a staredown when Zayn comes out of nowhere with a right hand to Braun. He gets clubbed and tossed, then Braun resumes his staredown with Lashley. Braun goes after Zayn again and beats him through Gorilla and carries him back down to the ring.

Just before he can get him inside though, Zayn shoves Strowman into the ring post. Then another ring post. He looks to do it a third time but Braun stands his ground and shoves Sami into the barricade. He gets him back in the ring and charges but hits the ring post instead. The referee chooses then to ring the bell.

Braun clubs Sami down as he runs at him. He tosses Sami from the ring, then shoulder tackles him at ringside. He gets Zayn back in the ring and hits the Running Powerslam for the win.

We see Alexa Bliss backstage, and she’ll be hosting A Moment of Bliss later tonight with Becky Lynch. Up next though, Lars Sullivan interviewed!

Charly Caruso is in the ring and she introduces Lars Sullivan. The freak (from SmackDown) marches to the ring. Caruso says his path of destruction in WWE is unparalleled (lol) and points to a video on the Titantron of Lars’ attacks. She then asks him what his goals in WWE are and, before he can answer, Lucha House Party comes out.

Sullivan gets angry as the Lucha’s party in the ring. Kalisto jumps over the ropes but gets caught and tosses aside. Dorado and Metalik hit stereo suicide dives and knock him into the barricade. Sullivan fires back though, knocking them around ringside. He gets Dorado back in the ring and hits a big slam, then lifts him up for the running sit-out powerbomb but Kalisto and Dorado pull him off and retreat.

We see picture highlights of Styles Vs. Rollins for the Universal Championship last night. We see Styles backstage, he’ll have an interview later.

Ricochet makes his way to the ring, where he’ll be facing Cesaro after the break.

We’re back out comes Cesaro with new music. Ricochet’s back is taped-up with Kinesio Tape.

The bell rings and Cesaro grabs Ricochet and throws him into the turnbuckles. Ricochet starts fighting back but Cesaro hits him with a big back body drop and Ricochet writhes in pain, rolling out of the ring.

Cesaro grabs Ricochet on the outside and tries to lawn dart him but Ricochet shoves him into the ring post. Ricochet then runs up the turnbuckles and moonsaults off to Cesaro on the floor. Ricochet gets into the ring, then dives over the ropes onto the Swiss Superman, but gets caught and slammed on the apron. It’s so hard to care about much of the high-flyers in WWE because none of them sell injuries; Ricochet shouldn’t be doing moonsaults if he’s trying to sell the back.

We come back from the break to see Cesaro stretching Ricochet’s back. Ricochet fights up and hits a jawbreaker. Cesaro shoves him before sending him into the ropes. Ricochet stands on Cesaro’s shoulders, backflips off, and hits him with a wild head-scissor takeover to get him out of the ring.

Ricochet hits Cesaro with an incredible dive, then gets him back in the ring and goes to the top rope. Ricochet leaps, but he eats an uppercut. Cesaro hits a torture rack backbreaker followed by the Gotch Neutralizer for the win.

Charly Caruso is backstage with AJ Styles. She asks where the loss to Seth Rollins leaves him on RAW. Styles says he’s back at square one. Styles likes hard work. Styles can beat Rollins, but not last night. But there’s no shame in losing. And there’s a reason why Rollins is the Universal Champion. Baron Corbin walks up and mocks Styles. Styles says Corbin is the guy that squandered his Money in the Bank opportunity and got fired as the RAW General Manager. Corbin says it’s a slap in the face that Styles got a title shot over him. Styles says he’ll give him a slap in the face and literally slaps Corbin in the face. Corbin stares at him and tells him he’ll pay for that.

Roman Reigns makes his entrance. We’ll hear from him, next.