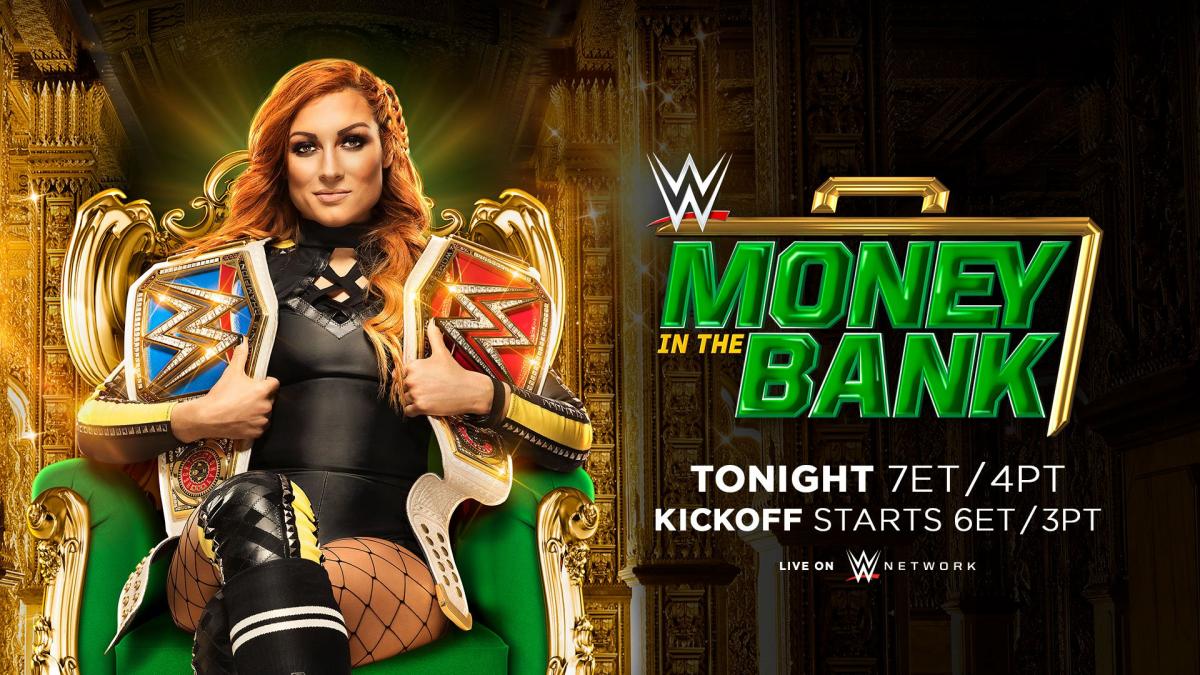 Welcome to Ringside News results for Money In The Bank 2019.

If you’re like me, you might be a little shocked when you remember this is the first PPV since WrestleMania. The showcase of the immortals seems like quite a while ago and a lot has changed in WWE. Another Superstar Shake-Up happened, then kind of un-happened with the new, confusing Wild Card rule. So things have been a little all over the place as of late, but tonight we expect the Superstars to deliver inside the ropes.

Tonight’s main event is, presumably, Becky Lynch Vs. Charlotte Flair. Which will be Becky’s second title defence of the night; the first being against Lacey Evans for the Raw Women’s Championship.  Having Becky hold two belts is rather pointless, so we can probably assume she’s going to drop one tonight. Either way, we can expect the main event to be stellar.

The other potential main event tonight is Seth Rollins Vs. AJ Styles for the Universal Championship. While these two are some of the best wrestlers on the planet, their feud hasn’t really sparked much excitement in fans. While WWE has attempted to inject some heel tactics into AJ’s persona, the fans are reluctant to boo him. Regardless, this could easily be our match of the night.

And then we have Kofi Kingston Vs. Kevin Owens. This is an interesting feud and much better than Rollins/Styles. Owens has been on top-form since returning to WWE and Kofi is the perfect, lovable foil. It’s hard to see Kofi dropping the title just yet, unless of course we get a shocking heel turn from Xavier Woods.

Tonight’s show will, of course, feature two Money In The Bank ladder matches, as well as Samoa Joe Vs. Rey Mysterio for the United States Championship, Roman Reigns Vs. Elias, Daniel Bryan and Erick Rowan Vs. The Uso’s, and The Miz Vs. Shane McMahon in a steel cage. The show begins at 6 PM EST with the Kick-Off Show. Until then, don’t forget to follow us on Instagram, download the Ringside News app, and enjoy the show!

The countdown to @WWE #MITB is ON…

The Money In The Bank Kick-Off panel consists of Coach, Sam Roberts, Charly Caruso, and David Otunga. The panel run down the entire card for tonight’s show.

Becky Lynch is interviewed backstage and asked if tonight will be the end of Becky Two Belts. She says the two clowns [Evans and Flair] know they don’t have what it takes to beat The Man one on one. She says we’ll find out what they’re made of tonight. She says she knows tonight isn’t easy and she could duck and dodge, but the trailblazing path is not an easy one. And you can tell the power of a belt and its holder by the line-up looking to get a shot, and she has two divisions gunning for her. And tonight we’ll see what happens when the man comes around.

We see Lacey Evans sitting in her dressing room. She says Becky Lynch talks a lot of trash but, just like trash, she’ll be left at the curb tonight. She says the more trash Becky talks, the sweeter it will be when she takes the Raw Women’s Championship from her. And that’s only the start of her bad evening, because after she’s done with her, Charlotte Flair will complete the sweep. Proving once and for all that a man is no match for a queen or a lady.

Kevin Owens is interviewed backstage and asked if he can become the new WWE Champion. He asks it back rhetorically, and says its not a matter of if, it’s a matter of how. He says he can slap the positivity off of Kofi’s face, or break his hands so he doesn’t have to hear him clap anymore. Regardless of how, he will do it. He says he doesn’t have any against Kofi Kingston, he’s a nice guy, it’s just that Kofi has what he wants. And tonight he can promise it will be a new day, because he will be the new WWE Champion.

Beth Phoenix and Sonya Deville joins the panel to discuss the Women’s Money In The Bank ladder match. Deville says it was an easy decision for her to step back and allow Mandy Rose partake in the match. Phoenix asks if inexperience may play a role, and Deville says that’s a non-factor because Rose has been in lots of first matches. Coach asks if she’ll be happy for Rose if she wins tonight. Zelina Vega interrupts the panel and starts bickering with Deville. They yell at each other until Coach has to send it ringside.

The Uso’s cut a crappy promo before the match, and Rowan is repping Slipknot, respect. We start the match with Bryan and Jimmy. Bryan takes a headlock, is shot off, then kicked and forced to the corner. Jey tags in and chops Bryan in the corner. Rowan tags himself in and floors Jey with a running tackle.

We got a commercial for Money In The Bank, during which Jey was tossed from the ring, then back inside and stomped by Rowan. Bryan is back in the fray and he chops Jey in the corner. Rowan is tagged again and he tries to squish Jey’s head by squeezing his fists against his temples. Bryan comes in and methodically applies a surfboard stretch to Jey. Bryan chops Jey before delivering his running dropkicks in the corner. Jey catches Bryan with a Samoan drop to give himself a breather.

Rowan tags in and Jey tosses him into the corner before tagging Jimmy. Uce attacks the big man in the corner with wild punches. Rowan fires back and looks for a back suplex but Jimmy lands on his feet and his a whisper in the wind for a near-fall. Uso goes back to the top rope but Rowan catches him and slams him with a modified jackhammer for a near-fall.

We got yet another commercial for Money In The Bank. Rowan sets Jimmy on the top rope and climbs up, looking for a superplex but Jey comes back and tries to stop him. Rowan manages to superplex them both from the ropes!

Bryan tags in and slowly delivers the Yes kicks to Jey, but misses the last one. Jey connects with an enziguiri, followed by a superkick. He takes to the top rope and looks for the Samoan splash but Bryan catches him and applies the Lebell Lock. Jey fights but can’t get out until Jimmy comes back in and breaks it up. Rowan comes back in but gets knocked out of the ring. Jimmy hits a suicide dive but he’s caught by Rowan, then Jey tries it and suffers the same fate. They hit him with double superkicks, then stereo suicide dives. Bryan looks to hit them with a suicide dive but he gets hit with double superkicks. Jimmy and Jey then hit stereo splashes to Bryan and win!

That was a very good match that makes me excited for a proper feud between those two. Though a lengthy title run for Bryan and Rowan is almost necessary for the division.

We return to the Kick-Off Panel for one last run down of the Money In The Bank card and that’s it for the pre-show.