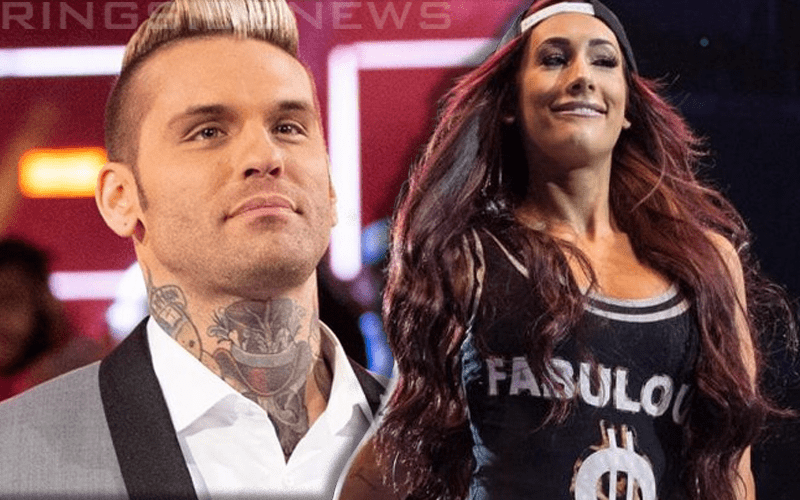 Corey Graves and Carmella’s relationship was introduced to the Internet Wrestling Community in a rather shocking way. Graves’ wife at the time aired all of their dirty laundry out giving people the assumption that Corey was cheating on her. This was not the case at all.

In fact, Graves and his wife were separated and in the final stages of a divorce. That didn’t change a lot of people’s minds about Mella and Graves’ relationship because it was impossible to unring that bell.

While speaking to Chasing Glory, Corey Graves went into detail about the internet’s invasion in his personal life after his wife dropped that emotional bombshell over social media.

“The story that made the rounds without paying it any mind, it was not accurate. It was made out of anger and emotion and it was… it wasn’t what it looked like. I had been out of the house, living on my own for quite some time before that whole situation.”

“It was a ‘sexy story’ that people went: ‘Oh, my god let’s talk about what a piece of crap this guy is.’ It was angry and emotional and its been apologized for on both ends. It’s moved forward.”

“That was the thing. I didn’t think it was anybody’s business other than my own and those closest to me knew. My small group of friends and even beyond knew before the actual process started. So that’s what I get for playing my cards close to the vest. The internet grabbed a hold and ran with it, but it blew by. The storm’s over if you know what I mean. Everyone’s moved on.”

Graves is meditating every day that he can and was 45 days straight until WrestleMania weekend came around when he didn’t have time for much of anything besides work. He said that the cool thing about stress is that it goes away. This situation with his ex-wife blew up the internet, but that is behind him as well.

Corey Graves announced over WrestleMania weekend at WaleMania that he is “fabulous” as well which is good to hear.