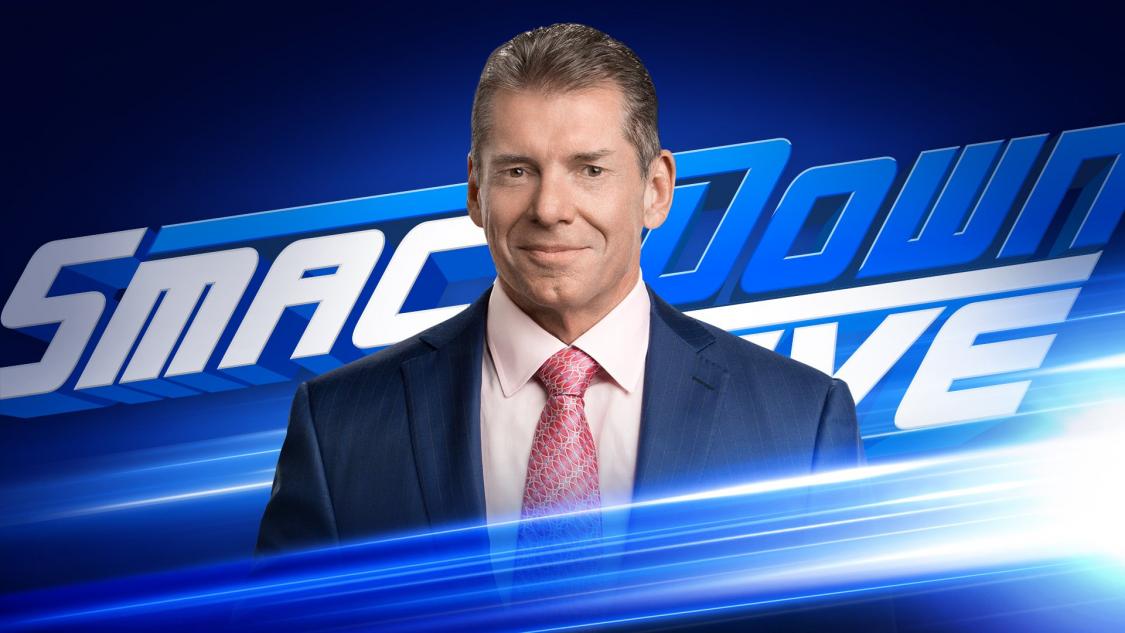 Welcome to Ringside News’ live coverage of SmackDown Live for April 16th, 2019. Keep refreshing after the show kicks off at 8:00 PM and we will start things from there!

This will be SmackDown’s turn for the WWE Superstar Shake-Up. We will also have a big announcement from Mr. McMahon that promises to be the biggest acquisition in SmackDown Live history. We can only imagine who it is and there are two obvious choices, either Roman Reigns or Brock Lesnar. However, you never know what McMahon might pull tonight. Because he could be talking about more than one person.

We are sure to have a night of surprises as Superstars make their way to SmackDown Live. Some prime candidates are top Superstars on RAW so things could get interesting.

Paige will also show up to reveal her new tag team and it’s anyone’s guess who that could be.

Kofi Kingston could very well get a challenger tonight as well. Since Big E is out of action with a bad knee this makes the next portion of Kofi’s championship reign even more important.

Also, The Hardy Boyz are the new SmackDown Tag Team Champions. After The Usos’ departure to RAW last night, it’s anyone’s guess who will be stepping up to face the greatest team in all space and time next.

All that and more is expected for SmackDown Live. We might just see some NXT call-ups too. If that happens we’re certainly crossing our fingers for no more Viking Experience repeats.

KO started things out and Montreal LOVED him. He hyped Mr. McMahon’s big announcement and they booed McMahon’s name, “you said it, not me,” Kevin responded.

Then Owens brought out Kofi Kingston without Big E’s usual entrance. It was just Xavier Woods and Kofi, but the Montreal crowd was still very into them.

They sat in three office chairs without the usual KO Show desk. “Ole” chants broke out for a moment before Kevin started talking to Kofi about his Mania win.

Kofi spoke in French and the crowd popped huge. Kevin said that was surprising and then he brought up Big E’s injury. Woods said E was injured, but on top of that with all the Superstar Shake-Up RAW took half of the Up Up Down Down roster and if Tyler Breeze isn’t on the blue brand before the end of the night he’s going to lose his mind.

Owens said they need backup more than ever and they need to enlist in the help of Big K — “no– Big O… Big O’s funnier.” Then Owens said he wants to be in the New Day. Kofi asked him if he was willing to wear a crop top. Woods said there is cereal knowledge and pancake throwing and video games. Kevin said he’ll work on that.

Then Kevin Owens swiveled his hips like Big E. Kofi said he’s a champ of the people and they loved the idea. So Big O is now an honorary member of the New Day. Then they gave Big O Kofi’s cut-up t-shirt and he put it on. Woods put a unicorn horn on Big O as he got down on one knee like he was being knighted too.

Then they danced while Rusev and Nakamura were watching backstage. Cesaro walked up and offered to join them in their tag team match tonight.

This match got off to a very fast start and the Montreal crowd was heavily into it. ALI took control after hitting a dive, but Balor came back with a Slingblade out of the corner.

Then ALI came back with a superkick for a two count. Balor drove ALI to the corner and drive his shoulder in before ALI nailed a knee to the face, but Balor came back with a legsweep and a stomp to the chest.

ALI was on the mat and Balor climbed up, but was stopped. ALI brought Finn off the top with a rana for a two count and then he climbed up on top too.

Finn moved out of the way of a 450 splash and nailed a shotgun dropkick and a coup de gras for the win.

Kofi and Woods were backstage and found Big O for his initiation. They told him he had to break Big E’s record of eating a plate of pancakes. Then Big O tried after saying he hasn’t actually eaten a pancake in his life. They faded to black so I guess we’ll never know if Big O was able to shove enough pancakes in his mouth to beat Big E’s time of just over 5 minutes.

R-Truth and Mella got to rap their way to the ring and the crowd was into them. You know a crowd is great when they’re into everything.

UPDATE: They showed Big O backstage finishing up that huge plate of pancakes. He acted like he was going to throw up, but he gave them the thumbs up instead.

Flair started out by slamming Mella down and saying she hates Canada. Then Carmella came back and got a roll-up pin for a two count. They battled next to Carmella’s giant WrestleMania Women’s Battle Royal trophy at ringside and then mella did a crossbody off of the barricade. She rolled Flair in the ring for a two count and then Flair lit Mella up with chops.

Carmella shoved Flair into the turnbuckle and started laying in the boots after that. Then Carmella hit her bronco buster followed by Charlotte getting up and laying a big boot to Carmella that sent her to the floor.

They continued and Flair took control. She hit a dragon screw through the rope that sent Mella to the floor and then Charlotte tried for a moonsault off of the barricade, but Mella knocked her down and hit a superkick.

Flair hit a chopblock as Mella was getting back in the ring and then she tapped out.

Suddenly, Lars Sullivan appeared and came to the ring as R-Truth was tending to Carmella. It looks like Sullivan is on SmackDown now? He destroyed R-Truth and it wasn’t pretty. However, Truth did try to get some offense in at least. Then Sullivan looked at Carmella and started to walk toward her.

Mella got out of the ring slowly and was led off by the referee while the Montreal crowd chanted: “Asshole.” Sullivan did another running powerbomb, but at least he didn’t do one of those dangerous diving headbutts.