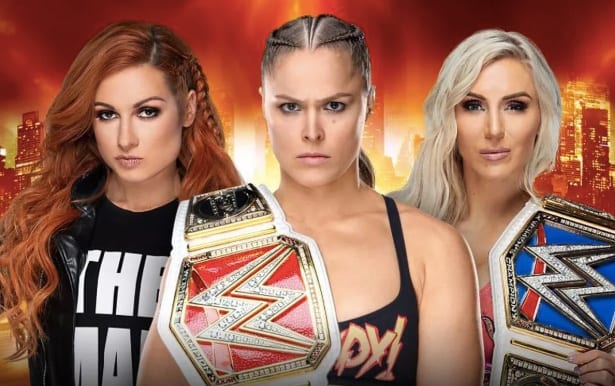 As seen on Sky Bet, the betting odds for the WrestleMania 35 main event have been released.

The hype for the RAW & SmackDown Women’s Championship match between Becky Lynch, Charlotte Flair and Ronda Rousey has been through the roof in recent months – and the revelation that it’d be the main event of the evening this Sunday only increased that excitement for the WWE Universe.

All three women have held up their end of the deal when it comes to making this build-up as memorable as possible, and now, all that is left is for them to put on a real show at MetLife Stadium.

At this moment in time ‘The Man’ Becky Lynch is the 2/5 favourite to win the match and take home both titles in the process. Charlotte is actually the second favourite with odds of 11/4, whereas the reigning champ Ronda Rousey is the underdog at 6/1.

Many fans are expecting Becky to complete her meteoric rise to the top by winning both titles, although others have thrown out various other suggestions that would see WWE throw a curveball into the mix.

It seems like that’d be an incredibly risky thing to do given the popularity of Lynch, but you just never know with WWE these days – especially after Brock Lesnar retained the Universal Championship against Roman Reigns last year.

All we can do now is sit back and enjoy the final countdown, as we gear up for all the events that make WrestleMania week the global spectacular that it is.