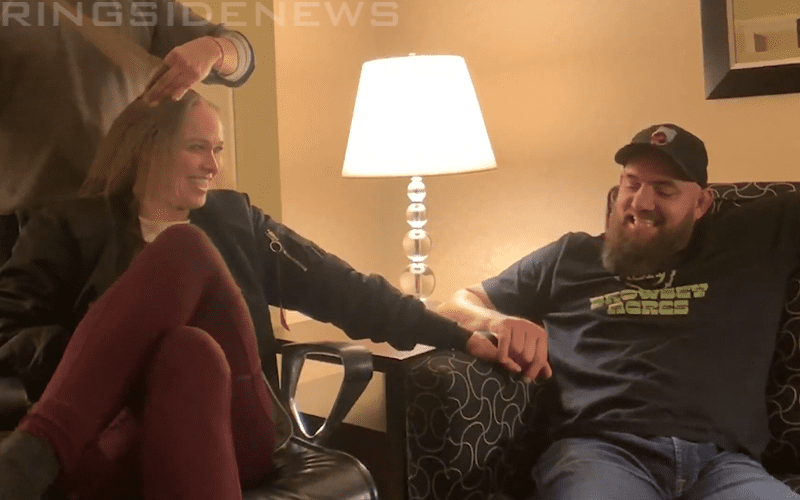 Ronda Rousey is continuing her heel antics on and off screen, at least on her YouTube channel. In a recent video she took part in another “shoot” interview, but this time her husband Travis Browne was part of the conversation.

Browne said it was totally worth it to assault the security guard on RAW this week. It said “I don’t give a sh*t” when it comes from being banned from future RAW programs too. Let’s just see how long WWE will keep that up because if they want to use Travis Browne they certainly will as long as he agrees to it.

The couple was asked how they stack up against other WWE couples and Rousey had an interesting response. She said nothing is fake about who her and Browne are. On the other hand, people like The Miz play a character who will put his wife Maryse in front of him when an opponent is coming at him. Browne said that is not something he would do and Rousey confirmed that he would protect her.

Then Ronda Rousey was asked about her WrestleMania plans and what if they don’t end up main eventing the show of shows. Rousey had her own reply, but it is also important to remember that she previously stated that she doesn’t need WWE’s money

Travis Browne commented that he has done everything he could too, “it’s been a really daunting task, but we’re here. There’s rumors that it may not be the main event. So you know what that means? People already know it’s the main event.”

This is a pretty interesting statement to make and it sounds like everyone’s hunch that the RAW Women’s Title Match will main event WrestleMania 35 is correct. We will just have to wait and see, but Rousey and Travis Browne certainly had a good time discussing it