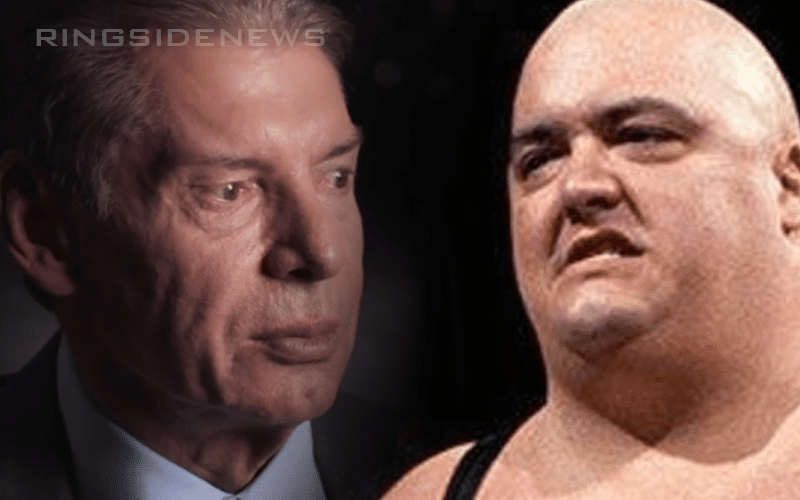 King Kong Bundy is no longer with us and it was a very sad moment for everyone who knew him. He is not in the WWE Hall Of Fame and there could be a very good reason for this.

Not only was Bundy involved in a lawsuit against WWE at the time of his passing, but he also had issues with Vince McMahon over money. Tommy Dreamer ended up in the middle of this tense relationship when he was just trying to book someone for Randy Orton to destroy during his Legend Killer gimmick.

He told an in-depth story about Bundy and WWE during Tommy Dreamer’s House of Hardcore Podcast.

“I’m working in Talent Relations for WWE. This is when Randy Orton was doing the ‘Legend Killer’ and he is going into a feud with The Undertaker. For Atlanta, Georgia, they wanted someone out of the Undertaker’s past to do something and show up. So, it had to be a heel. So we are all thinking and they ask, creative would shoot an e-mail to Talent Relations for suggestions. So, I’m going through my Rolodex brain of all these guys. I was like ‘Ted Dibiase, King Kong Bundy, Jimmy Snuka’ I don’t remember the rest. It came back ‘Man, King Kong Bundy would be a great idea, do you have information for him?’ I said ‘I could get it.'”

“Now, I gotta explain something to you in WWE. When you are behind the scenes like that, sometimes, this was on a Thursday, when they come up with a creative idea, and they ask you to contact this person. It feels like if you’re the person doing that job, and you have whole different departments, it’s like the stock market will stop. The WWE will shut down until you hear back from King Kong Bundy. So I make the call and 15 minutes go by, 30 minutes go by. Then you start getting texts, ‘Anything?’ so, I got nothing… Now John () is like ‘Anything, Anything?'”

“I was like ‘Dude, I left him a message.’ He’s like ‘you have his cell phone number?’ I was like ‘I have one number, that’s how I got him.’ Next day, I come back to my office, I sit down and I see my thing is flashing.”

“Then I get the message. ‘Hey Dreamer, it’s Chris Bundy man. How are you doing?’ I have to backtrack and tell you the message I left him. I was like ‘Hey Chris, it’s Tommy Dreamer. I hope you are doing well. I work in WWE now with talent relations. We have a creative idea for if you’re interested.’ and I left my number. Fast forward to the next day. ‘Hey Tommy, it’s Chris Bundy man. How are you doing? Congratulations on the spot. Hey man, this is not on you. I’ve always been cool with you, always been friends with you. I need you to relay this message to WWE. Especially to Vince McMahon. Number one, you need to tell him that he needs to pay me the money that he owes me. Number two, unless there is a creative idea for me winning the title, I have no interest in it, because he promised me the title when I put over Hulk Hogan, and he never delivered. So please go tell him to go f*ck himself. I love you, remember when I wanted to be your brother? Take care brother.'”

“So, I’m not the most politically correct person, so I send out an email that is copied to everyone in WWE. This is to Vince McMahon, Bruce Prichard, Michael Hayes, Stephanie McMahon, John . I said ‘King Kong Bundy has reached out and declined the offer.’ and I get ‘what did he say?’ and I say ‘he was not too happy with the current climate of WWE’ and then I got ‘what did he say?'”

“Then I was like alright. I said exactly what he said. Number one, he wants the money he was owed. Number two, unless we have the idea to put the title on him, he has no interest and to tell Vince to go f*ck himself. Within four minutes of sending that e-mail. Here comes John who is my boss, he goes ‘What the hell is wrong with you? Why would you send that?’ I went ‘What? they kept asking.’ Johnny “You just told Vince McMahon to go f*ck himself!” I said, ‘I did not tell Vince McMahon to go fuck himself I said King Kong Bundy told Vince to go fuck himself.'”

“Then the reply was from the Chairman, a man’s man. He just wrote back ‘moving forward.’ So uh, that was my King Kong Bundy story… For a lot of people who inquired about why he isn’t a WWE Hall of Famer, apparently, he has some behind the scenes issues.”

King Kong Bundy could be inducted into the WWE Hall Of Fame eventually, but it doesn’t appear to be happening this year. It took Chyna years after her passing to receive an induction and she was on rocky terms with WWE as well. We will have to wait and see, but if King Kong Bundy never receives his spot in the WWE Hall Of Fame it might be thanks to Tommy Dreamer’s email skills.