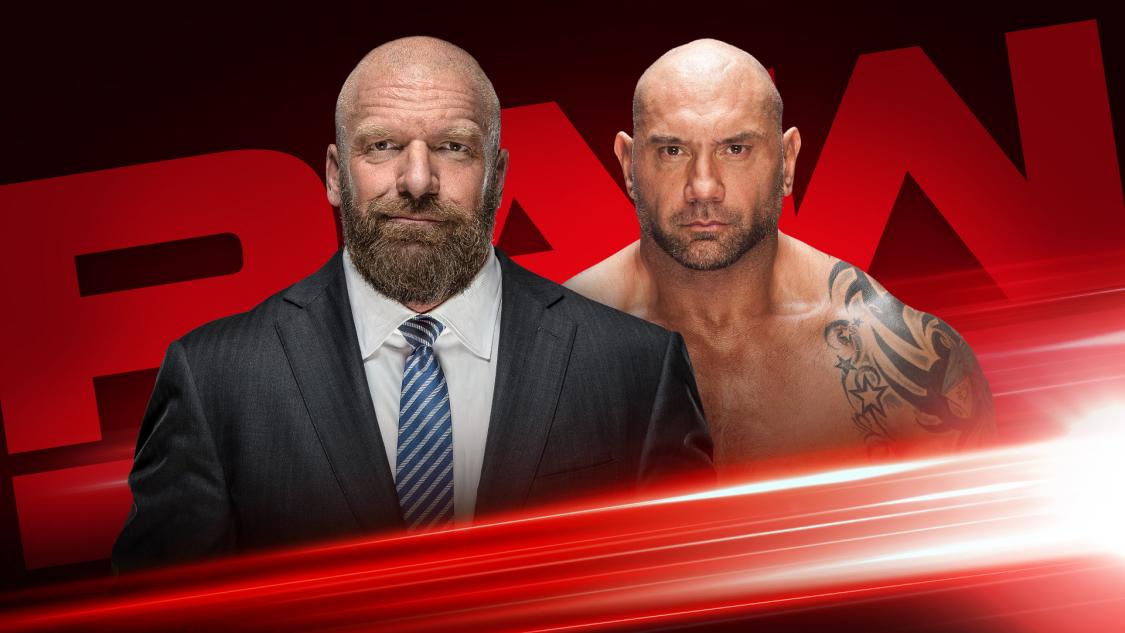 Tonight’s show will feature the huge showdown between Triple H and Batista. Last week Batista didn’t show-up to Raw and Triple H cut an odd promo that tossed kayfabe aside. We’ll see tonight if Batista goes for the real-life angle as well but this is one is bound to end in fisticuffs.

The Shield wrestled their (probable) final match last night, and beat Bobby Lashley, Drew McIntyre, and Baron Corbin. Tonight there will be a “farewell address” but it’s unclear how this will go. Will Ambrose attack Reigns to ignite a WrestleMania feud? Or will they simply walk off into the sunset?

Also happening tonight is an Intercontinental Champion match between Finn Balor and Bobby Lashley, and Becky Lynch has been officially added to the WrestleMania main event, so all systems are go on that one. That’s the preview for tonight’s show, remember to follow us on Instagram and download the Ringside News app, and enjoy the show.

Raw opens and The Shield’s music hits, and the crowd pops loud. The Shield makes their way to the ring through the crowd. It is announced that Roman Reigns will be in action tonight, his first singles match since coming back.

They get into the ring and Reigns says he’s come to realise over the past few months that life is short and tomorrow is not guaranteed. If last night was the last night ever, he has no regrets because he was in this ring doing what he loves with people he loves. Last week Reigns asked Rollins and Ambrose for a favor, and they didn’t let him down. However, they’re on the Road to WrestleMania so they need to handle their business. Roman says he hasn’t had a one-on-one match in months, so he’s going to correct that and have one tonight. Ambrose has some business as well. Reigns doesn’t know what it is, but Ambrose probably doesn’t either.

The man who has the real business is Seth Rollins. How many years has Rollins been chasing the dream? A “Slay the Beast” chant picks up, and Reigns says that’s what Rollins will do. Rollins is in the main event of WrestleMania and will take the Universal Championship from Brock Lesnar while the world chants, “Burn it down”, which causes such a chant to kick-up. The Shield then pose with their fists in the ring. Reigns and Ambrose walk off while Rollins stays in the ring.

Rollins says The Shield burned it down last night. but before he can say much more, he’s interrupted by Paul Heyman. Heyman walks onto the stage and introduces himself as the advocate for the reigning, defending, undisputed Universal Heavyweight Champion, Brock Lesnar. Rollins mocks the way Heyman says Lesnar’s name and rhymes off all the people Lesnar has run through. from The Undertaker to John Cena.

Heyman says he appreciates the impression. Rollins says Heyman’s the advocate for the Brock Lesnar that had a real tough time getting through Daniel Bryan, pushed to his limit by AJ Styles, and came so close to being beaten by Finn Balor, so clearly size does not matter. Heyman says that’s the Brock Lesnar he’s going to face. Rollins says Heyman’s client has a bit of a problem with guys that are his size, speed, stature, ability, and style. With all due respect to Bryan, Styles, and Balor, they are all incredible in the ring, but he’s uniquely suited to beat Lesnar at WrestleMania. Rollins says Heyman has three weeks to run his mouth until he beats The Beast and brings the title back to RAW.

The crowd begin chanting “Slay the Beast”, but Heyman says that will not happen. He says Rollins is running down names, but he’s not telling the whole story. Lesnar had no time to prepare for any of those opponents. The crowd loudly boos him. It was initially supposed to be Lesnar taking on Jinder Mahal, but it wasn’t Mahal. It was Styles. It was supposed to be Lesnar taking on AJ Styles, but instead it was Bryan. It was supposed to be Braun Strowman, but it turned out to be Balor. Heyman then says Lesnar has time to prepare for Rollins and shows a video of Lesnar dominating everyone and being Brock Lesnar.

Heyman says ever since Rollins won the Royal Rumble, Lesnar has had his sadistic fantasies in his unrepentant mind focused on Rollins. If Rollins thinks he knows Brock Lesnar, he certainly doesn’t know him at all. All of a sudden Shelton Benjamin runs in from behind and gives Rollins a German Suplex. He then hits two more suplexes and stands over Rollins as we head to the break. Well, that was unexpected.

We return and Benjamin and Rollins are about to have a match. Heyman has joined the commentary team for this one.

Rollins runs at Shelton, who takes him down and taunts him and talks trash. Seth gets back up and they lock up and Benjamin counters a headlock to take Seth down again.

Rollins fights back to his feet with the help of the crowd, backs Benjamin to the corner. Rollins gets onto the ropes and kicks Bejmain away, then hits a blockbuster from the middle rope. Rollins looks for The Stomp but Benjamin avoids it. The Architect then lands on his feed from a German suplex and knocks Benjamin from the ring. Seth goes for a suicide dive but Benjamin hops onto the apron and hits a knee to the face. Benjamin is in control as we head to the break.

We return to see Rollins being held down in a headlock but he starts climbing to his feet. Benjamin tosses Seth from the ring, then goes out after him and throws him into the barricade. Benjamin floors Rollins with a clothesline. Heyman says he paid Benjamin for this.

We’ve got an impromptu match on our hands! Can @WWERollins burn it down against his surprise competitor @Sheltyb803 on #Raw?? pic.twitter.com/sYqBhrpZ6M

Benjamin gets Rollins back in the ring and looks for a powerbomb but Rollins flips him over and into a bridge pin. Rollins then catches Shelton with a hurricanrana into the turnbuckles. Paul Heyman took a phone call during commentary and said it was Lesnar, who was unhappy with the video package or Seth’s comments, so he will be here live, next week. Cole sarcastically says everybody is excited for Brock to actually show-up to work.

Meanwhile, Seth catches Benjamin with a slingblade and a springboard clothesline for a two count. Seth looks for a superkick but Benjamin dodges it and lands a release German suplex, followed by another. Benjamin takes his time getting Seth to his feet, but then Rollins kicks him in the gut and lands The Stomp for the win.

Still to come tonight, Roman Reigns Vs. Baron Corbin and Triple H face-to-face with Batista. Up next however, Finn Balor defends his Intercontinental Championship against Bobby Lashley. Balor makes his entrance, shaking Seth’s hand on the way past. Weirdly, Lashley’s face appears on the Titantron when Finn gets to the ring but he doesn’t say or do anything, just stares.

The match gets underway and Lashley immediately scoops Balor up and slams him down. He then tosses Seth into the corner and stomps him. Lashley forces Finn over the middle rope and chokes him. Lashley applies a neck crank to Finn in the middle of the ring.

Balor gets to his feet and stuns Bobby with a dropkick. Lashley again scoops him up and rams him into the turnbuckles. Finn attempts an enziguiri from the apron but Lashley catches him feet and slams him down. Balor then dropkicks Lashley out of the ring, dives through the ropes kick, then hits a soccer kick from the apron.

We come back from the break to see Lashley applying a chinlock to Balor. During the commercial break, Lashley slammed Balor into the barricade. Balor fights out of the chinlock, but Lashley catches him with a reverse STO for a near fall. Bobby lifts him up, but Balor slides free and throws him out of the ring.

Lashley quickly pulls the Champion out of the ring before hitting a back suplex onto the apron for a near fall. Back inside the ring, Lashley applies a chin lock again. And once again Balor fights up but Lashley takes control. Bobby sets up for a powerbomb, but Finn counters into a back body drop and a dropkick. Balor hits some running forearms before finally taking Lashley down. Balor chops the chest before Lashley reverses a whip to the corner.

Lio Rush is ringing the bell and holding the Intercontinental Championship! Balor goes outside and stares him down. Lashley comes out but Finn slams him into the ring post, then kicks Lio. With Bobby on the mat, Balor goes for a springboard, but Lashley spears him out of mid-air for the win!

Charly Caruso is backstage with Baron Corbin. They replay the video from last October when Corbin said he hope Roman Reigns’ doesn’t come back to Raw. He admits to it and says he doesn’t care about anybody’s feelings. He says there is no way Roman is 100% after his disease, and in his absence, he’s been carrying the ball. He promises to house train the big dog.

After the break, Ronda Rousey will address her actions at Fastlane last night.