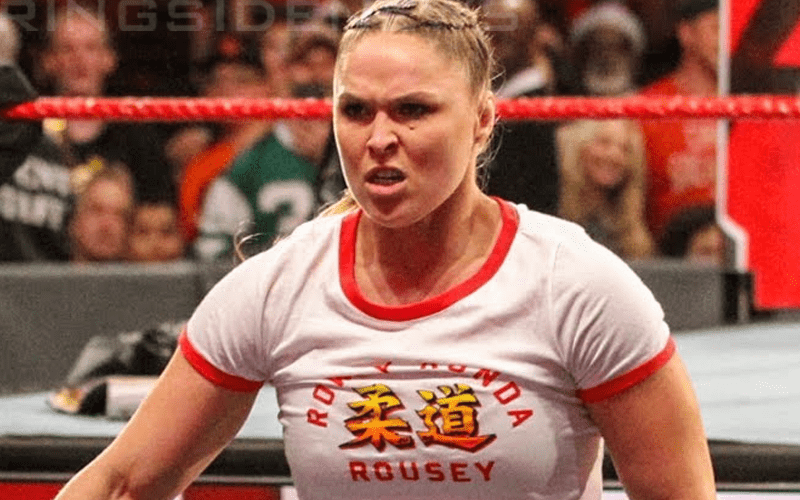 During a recent road diary from Ronda Rousey, things got a little out of control when she was asked some questions about how RAW went down this week. Needless to say, this is your warning that the rest of this article is kind of NSFW.

Ronda Rousey admitted that she was devastated when The Shield broke up the first time around. Now that Roman Reigns is back, she said she is so happy. Then things got pretty real when they brought up her portion of the program.

“It’s just that like I’m tired of just being here to entertain people. I’m not taking any more direction or notes or orders and every time I got out there I’m gonna do whatever the hell I want to do and they’re just gonna have to keep filming and cashing the checks I bring in. What else are they gonna do? Not accept the money I’m making them?”

Rousey addressed her heel turn head-on. Then she took a moment to get a bit sidetracked in order to rail on the LA crowd that booed her at Survivor Series.

“It’s been building up in me since Survivor Series, 100%, yeah. Cause me and Charlotte put on, I mean it was a hell of a f*ckin’ match and I took a hell of a beating and there wasn’t a person there who wasn’t fixated on what was going on every single second. We completely stole the show of the whole card […] and they booed me out of the building.”

“That was such a huge slap to the face, I’m like, ‘f*ck you people, f*ck all you guys.’ Like even Los Angeles — they don’t have any f*cking pride in their own city at all.”

“That whole city is just a bunch of f*cking transplants trying to escape sh*tty ass f*cking Ohio or where ever the f*ck that they’re from and they have no f*cking pride in LA and they come to our games and sh*t on our teams and say, ‘I’m f*cking from Los Angeles, I’ve been living here for 10 years’ — No you’re f*cking not…. so it’s been bubbling up in me since then.”

Rousey continued her rant on the tour bus. She said that WWE can say whatever they want to explain her actions, but she is tired of taking their direction at this point. So whatever she does on WWE television is going to be her decision from this point on because she is not playing their games anymore.

“I meant that I’m going to disrespect the sport that they all love so much. ‘Oh don’t break kayfabe Ronda’ — Wrestling’s scripted, it’s made up, it’s not real. None of those bitches can f*ckin’ touch me. The end.”

Those are some pretty strong words from Ronda Rousey. It certainly seems like she could have worked herself into a shoot as previously reported.

You never know in WWE, but apparently, Rousey is doing whatever she wants in the ring and WWE will just have to try to write around whatever she wants to do and say. If this is a work (which is likely) — it’s a great one. Let’s just hope that she watches her mouth on live television because that could come with some pretty stiff penalties from the FCC.