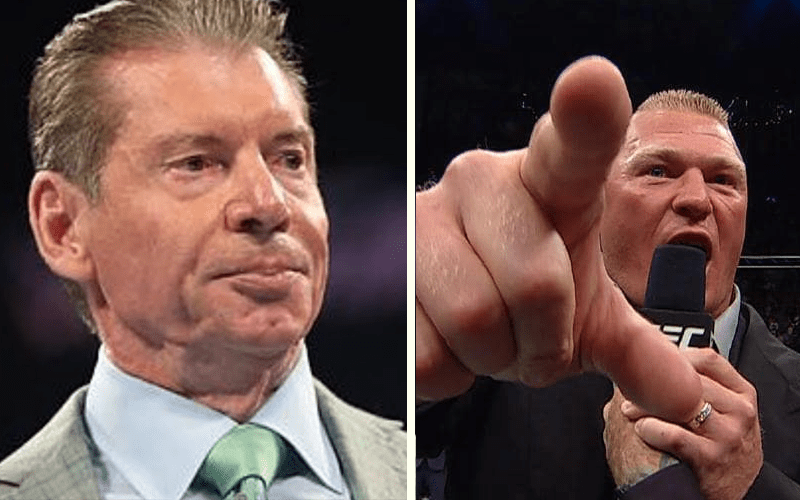 Brock Lesnar is the WWE Universal Champion, but Seth Rollins would really like to change that at WrestleMania. Lesnar is in high demand as well because he could always jump back to UFC.

Dave Meltzer discussed the fact during Wrestling Observer Radio that UFC wants to hold Lesnar vs Daniel Cormier soon enough. Brock Lesnar’s WWE contract might be an issue, but he could always turn UFC’s interest into a much bigger offer from WWE.

“[The UFC] wants Brock Lesnar and Daniel Cormier. They absolutely want it. I’m sure Brock and his people are going like, ‘As soon as this deal is over with Vince after WrestleMania’ — or whenever it ends I’m sure it’s WrestleMania and the Saudi show, I’m sure he’s working the Saudi show. After that maybe he’s saying he’s gonna go and he’s gonna go to Vince and say, ‘They offered me $9 million for this fight, can you offer me $9 million for two matches I’ll stay.’ Or whatever the number is, I don’t know.”

“I mean so far Vince has matches every offer. I don’t know if that’s going to change. It’s not like they don’t have the money. Vince doesn’t want the perception of guys leaving him, that’s the one thing he doesn’t want.”

You never know what Brock Lesnar will do next. He surprised everyone by retaining the WWE Universal Title at last year’s WrestleMania which really sent people for a loop because everyone was sure that Roman Reigns would leave New Orleans as the champion. With the UFC’s obvious interest in bringing Lesnar back it could make for a very interesting negotiation later on.