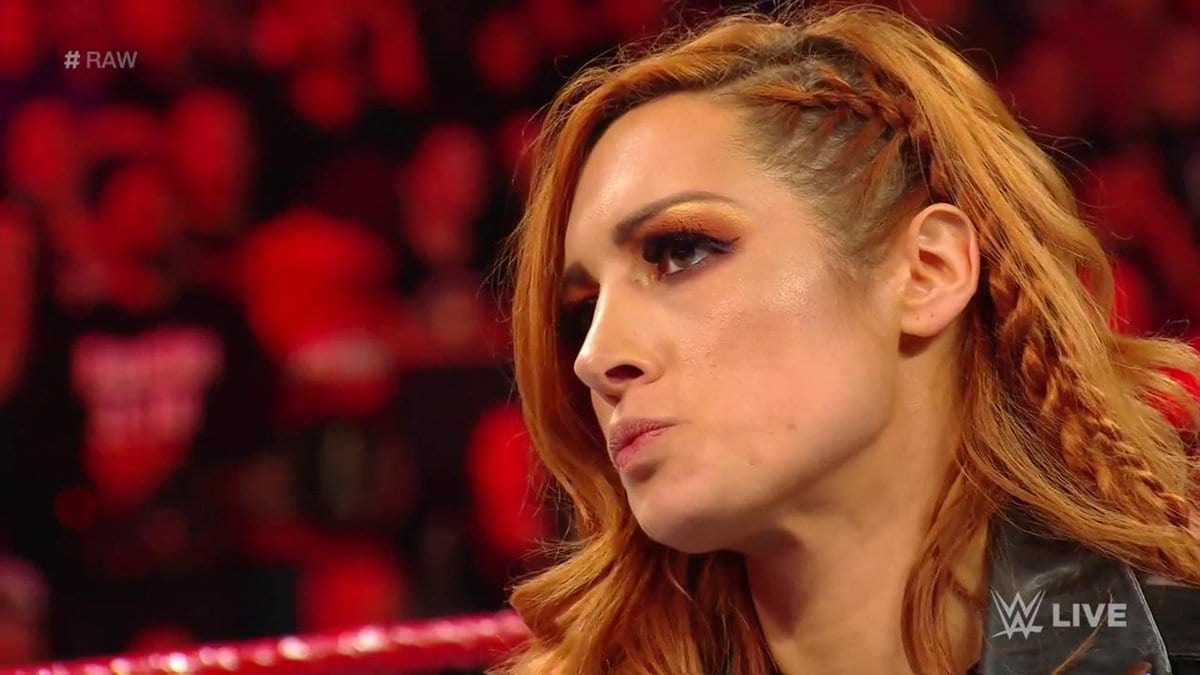 Becky Lynch was suspended from WWE because she wouldn’t go see a doctor. She didn’t trust them and she didn’t trust Stephanie McMahon who The Man laid out and attacked after The Billion Dollar Princess delivered her suspension.

Then Becky Lynch showed up on SmackDown Live the next night and slapped Triple H after taunting him for punching Stephanie in the face.

Triple H and Stephanie McMahon kicked off RAW this week and said that they are going to do what is best for business. Then Becky Lynch entered without an introduction.

Triple H apologized to Lynch about claiming that there was no injury. She made it to the doctor and everything checked out so her suspension was lifted.

This was good news for Becky Lynch, but then Stephanie McMahon and Triple H said that there is a catch. Lynch needed to apologize in order to get her WrestleMania match and keep her suspension lifted.

Becky Lynch had a real problem with apologizing to Steph and Triple H. Becky Lynch said she doesn’t trust the McMahons and that they have been screwing people for decades.

Becky Lynch said she will fight Triple H, Stephanie McMahon, and Vince McMahon for that matter. What she won’t do is apologize. Lynch and McMahon got in each other’s faces and were screaming. Then Triple H said that Lynch needs to put her pride behind her. Triple H hyped Lynch up about not blowing her WrestleMania match.

Fast forward to the very end of the show and Becky Lynch came back out again followed by Stephanie McMahon and Triple H. They implored her to make the right decision and accept the consequences for her actions and apologize.

The Man said she doesn’t trust The McMahons and said, “If all that’s keeping me from my dreams is two little words then…” the crowd started chanting “Suck it.”

Then Becky Lynch actually apologized and said that they have a deal. Triple H said that Lynch has her match. Ronda Rousey came out and all of udden, Vince McMahon came out and told Lynch that she’s not The Man… he is.

Flair came out and posed for a shocked crowd as Vince McMahon said that Ronda Rousey needs to get used to seeing Charlotte Flair because at the end of WrestleMania she will be seeing Flair with her hand raised.