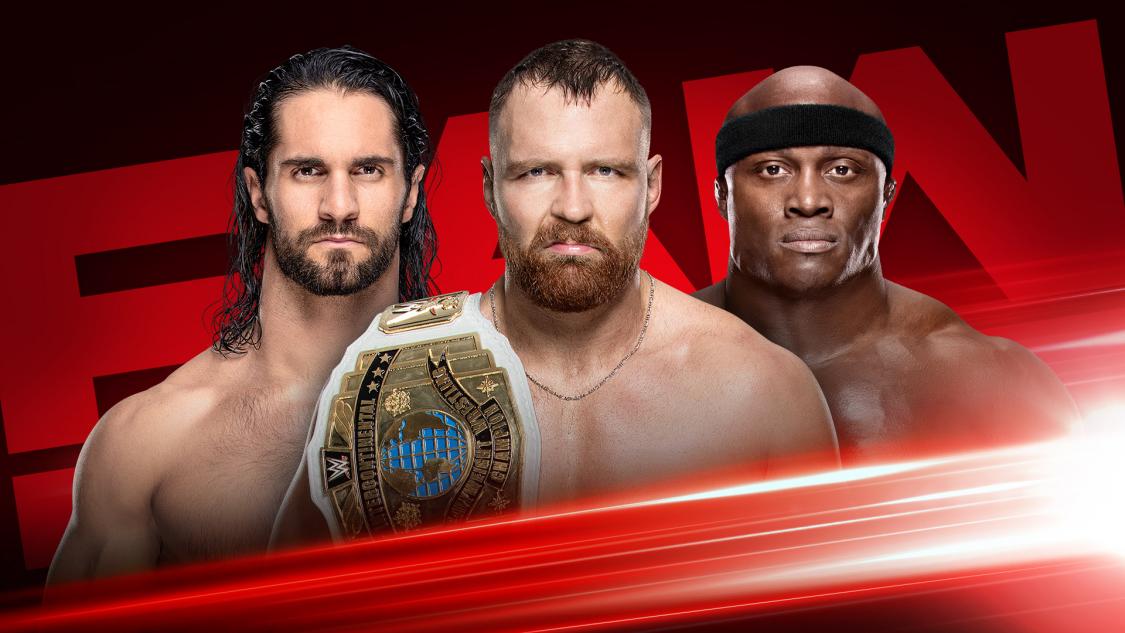 Our main event tonight is a huge Triple Threat Match for the Intercontinental Championship; Dean Ambrose Vs. Seth Rollins Vs. Bobby Lashley. These three have crossed paths as of late – well more so Rollins with both the heels – and tonight they square-off in a big three way match. Could we see Ambrose lose his belt? Or will he retain by hook or crook?

We will hear from Braun Strowman tonight, ahead of his showdown with Brock Lesnar at the Royal Rumble. Last week Braun and Brock came face-to-face, sort of, when Lesnar walked around the ring in an attempt to intimidate the monster. The reality is, Braun isn’t cleared to compete quite yet, and they don’t want to risk injuring him before the Rumble, but that severely limits the build for this match. Regardless, Brock isn’t at tonight’s show.

Elsewhere on tonight’s WWE Raw, we learn more entrants for the Royal Rumble match, The Revival continue to claim there is a conspiracy against them, and Sasha Banks teams with Ronda Rousey to face Nia Jax and Tamina, can they co-exist? Let us know what you’re excited to see by downloading the Ringside News app, and following us on Instagram. Enjoy the show!

The show opens with the Chairman of WWE, Vince McMahon arriving at the arena in a limousine. Vince instructs his driver to shine a spot on the back of the vehicle before strutting off.

We go live to the arena and out comes the Monster Among Men, Braun Strowman! The Monster makes his way to the ring and the fans chant “Get These Hands!”

Strowman says, whether he would admit it or not, Brock Lesnar is afraid of him. He says when he had the Money In The Bank briefcase, Brock had Baron Corbin get between them to screw him over. Well, now he’s all healed-up and Corbin is no more, meaning Brock’s time is up. Strowman says he will get his the Universal Championship at the Royal Rumble, while the only thing Brock will get is his hands!

Hands will be GOTTEN at #RoyalRumble.

Strowman leads the crowd in a chant but then he is interrupted by Baron Corbin. The former GM says he may not run the show anymore but… Strowman then interrupts him and reminds everyone that Corbin was fired. Strowman then gets the fans to chant it at him. Corbin says he will happily stand up here all night to say what he has to say. Corbin tells Braun to stop lying to the people, because they believe in him and he keeps letting them down. Corbin says he and Braun know that the Monster cannot beat Brock. Meanwhile he plans on winning the Royal Rumble match and, doing something Strowman never will: headlining WrestleMania!

Strowman jumps out of the ring and runs towards Corbin, who then runs backstage. Strowman goes backstage after him and Sunil Singh gets in his way, so Braun throws him over a table. Strowman wanders off looking for Corbin.

The camera lingers for a second, then we hear the strum of a guitar. Elias is standing by some boxes and he starts playing a little song. Strowman then appears beside him and Elias sings that Corbin went into the parking lot, into Vince’s limo. Strowman makes a beeline for the limo and pulls the driver out by the neck and throws him. He then lifts a pipe and smashes the window, before ripping the door right off. Corbin escapes the other side and runs off.

Before Strowman can chase him however, we see Vince McMahon standing, looking pissed. Strowman and Vince stare at each other as we head to the break.

We go backstage to see Strowman trying to put the door back on the limo, but it falls off. McMahon says Strowman is a wrecking ball. He tells him he will be fined $100,000 for damages! Strowman is furious and says this piece of crap is not worth it. McMahon says if he’s going to raise his voice, if he’s going to behave like this, his Universal Championship match is cancelled. In fact, that’s exactly what it is. McMahon walks off, leaving Strowman furious. He turns to the limo and decides to flip it over like it’s nothing!

This won’t only cost @BraunStrowman ?…

We go live to the arena where out comes the WWE Women’s Champion, Ronda Rousey, followed by her partner tonight, Sasha Banks! They will face off at the Royal Rumble, but tonight they take on Tamina and Jax.

We return to see Braun Strowman being escorted from the building with several guards. As he walks out the doors, Baron Corbin emerges from a nearby room, grinning ear-to-ear.

We start things off with Sasha and Nia. They circle each other but then Nia says she doesn’t want Sasha, she wants Nia Jax. Sasha feigns tagging in Rousey, but instead turns and punches Jax. Sasha hits the ropes and comes back with a hurricanrana to Jax! Banks knocks her to the corner and then catches her with a springboard arm-drag… except Nia doesn’t fall. Nia lifts her up and tries to throw her but Sasha climbs onto Nia’s back with a sleeper. Jax slams Sasha to try and get her off.

Banks goes to the apron, then hits a middle-rope bulldog to Jax for a two count. Banks then tags Ronda Rousey to a decent reaction. Nia immediately takes the Champion to the corner and drops her. Tamina is tagged in and Rousey almost immediately takes her down into the armbar but Nia pulls Tamina out of the ring. The heels regroup on the outside. Tamina feigns getting back into the ring. The heels are still walking around the ring but then Banks comes flying off the apron with a meteora to Jax.

We return to see Sasha Banks being held in a bearhug by Jax. Sasha gets out and looks for a second hurricanrana but Nia reverses it into a powerbomb. Jax follows-up with a cannonball to Banks, before applying a chicken wing of sorts. As the move is in action, we take a break to see a trailer for Glass. So commercials in between commercials now? O.K.

We’re back with the wrestling show, in time to see Tamina tag in and stomp down Sasha in the corner. Tamina looks for a body slam but Banks rolls down her back for a pin attempt to no avail. Banks looks to tag Rousey but can’t reach, then Tamina punches Rousey off the apron. After a kerfuffle in which Rousey attempted to storm the ring, Tamina inadvertently speared Nia off the apron! Banks took advantage of the confusion to lock-in the Bank Statement and Tamina taps!

After the match Charly Caruso comes in and interviews the ladies. Rousey says a victory of Sasha will be her greatest accomplishment as Champion. Banks says she’s happy Rousey already considers her on a list of achievements. Rousey says that’s not what she meant, she just meant that she will show Sasha the utmost respect by making her tap out. Sasha says that Ronda isn’t the only woman around here that can make people tap out, just as Nia or Tamina. Banks says she will show Ronda how to lose with some class at Royal Rumble. Ronda gets angry and says she can keep the title of “classiest loser”. Sasha gets angry in response and says that she didn’t call out Ronda, it was the other way around. Sasha says she will make Ronda tap out and leaves. Ronda chases after her and tries to apologise but Banks is having none of it.

Tap out at #RoyalRumble?@SashaBanksWWE doesn’t plan on it. #RAW pic.twitter.com/LtILu6pdeX

Backstage, we see a long line of talents outside Vince McMahon’s office, waiting for some one-on-one time. The door opens and out steps Jerry Lawler to a big reaction. The No Way Jose conga line goes past.

We’re back and Ronda, Sasha, Bayley, and Nattie are arguing backstage. Sasha and Ronda storm off, then Nattie and Bayley begin arguing amongst each other. The Riott Squad approach and butt their noses in, before challenging Natalya and Bayley to a match, if they can find a third partner. They accept.

Lucha House Party makes its way to the ring, pinata’s in hand. The Revival are their opponents. Dash and Dawson say that Lucha House Party saw them get screwed in their title match last week, and tonight they will pay for not speaking up.

The Revival Vs. Lucha House Party

Kalisto and Gran Metalik are representing the Lucha’s tonight, and it’s Kalisto starting things off against Dash Wilder.

Wilder takes Kalisto down and mocks him. Kalisto starts to make a comeback and takes Wilder down with a nice springboard arm drag. Kalisto and Metalik hit Wilder with a double-team splash for a two count. Dorado tags back in, but Dawson comes in and takes him down.

Mid-match, we suddenly cut backstage to Dasha Fuentes outside of Vince McMahon’s office. Apollo Crews is there and he says everyone is lined-up to get a shot at Brock Lesnar. Curt Hawkins then appears, as does EC3. Then The B-Team appear and say the B stands for Brock. Dasha asks which one of them wants to face Brock, to which they look like they didn’t know that was the purpose of the line. Finally, Heath Slater and Rhyno approach her and Slater says he doesn’t want to face Lesnar, because he has kids.

We go back to the tag match – these mid-match cutaways are not the answer to Raw’s poor ratings, they’re indicative of why. Metalik takes Dash and Dawson down with some nice aerial offense. The heels start to make a comeback. Dawson DDT’s Metalik and covers. Metalik gets his foot on the bottom rope, but Wilder pushes it off and the referee counts three!

Lucha House Party are frustrated after the match, they were robbed. The commentators debate if it was a wrong or not.

We’re backstage with Dasha once again and this time Vince emerges from the office. He asks her if she wants a scoop, then says he is headed to the ring to tell everyone who is facing Lesnar.