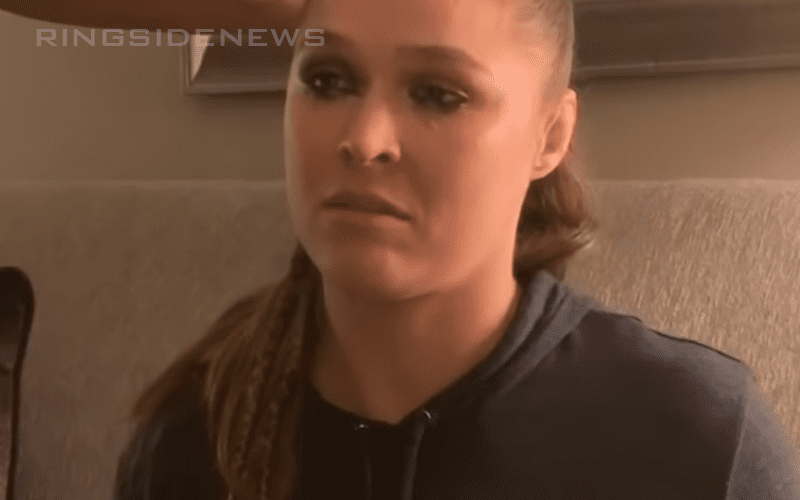 By now we’re sure most of you are aware of the YouTube channel created by RAW Women’s Champion Ronda Rousey- who often does Q&As and discussions amidst her vlogging content on the platform.

During her latest video, Rousey had her hair and makeup done while she discussed a variety of topics. The most prominent topic, in our eyes, is Rousey’s deep discussion on her improvement in the ring over the year she has been with WWE, and why Sasha Banks, in her opinion, is THE woman to have a match with- her dream match.

Rousey made the following comments on her growth as a competitor and how it pertains to her dream match with Banks:

“Everyone always asks me what my dream match is and I’d always say Sasha Banks because, I mean, I think- you know, in my opinion, and opinion is subjective- I think a lot of women have had their best match with Sasha and I think that more people in the women’s division have had their best matches with Sasha, I think, than anyone else. In my opinion. So I’ve always really been excited about the potential for what she could really bring out of me and up until this point, I didn’t think I was at the level where I could fully take advantage of the opportunity of being able to have a match with her.

“Y’know, I mean, I still [am] looking back at other matches and I’m like ‘if only I knew this than’ and ‘I could’ve done this.’ So it’s not like those earlier matches were missed opportunities but now I would, you know, I would do things differently.

“I just think after my first year, after everything I’ve learned… I mean I’ve- I can’t believe I had my first match ever and had no clue what the hell I was doing and had to perfectly memorize and walk through every single moment of a match- which was WrestleMania. I feel like that was a whole person ago, almost, you know? It’s so crazy, it’s just like…I’ve been completely immersed in this culture.

“So the point I was getting to is…it’s like getting into a debate. Yeah. Like being on a debate team, but it is a language you don’t know and so the first time I went for a debate I already wrote out a script and had someone translate it off for me and tell me how every word was pronounced and I would just memorize word by word. Being able to say it. I wasn’t actually able to actively debate with anybody. After I’ve been immersed in it for so long it’s not like I’m completely fluent in the language, but I know enough of it to get my point across- for people that know what I’m actually talking about, yeah. I might not- yeah, I might not have the greatest vocabulary to put things in a perfect way…but I can speak enough for you to understand what I mean and be able to tell a story.

Are you excited for Rousey vs. Banks? Do you feel as though Rousey has improved over this past year? Let us know your thoughts, opinions, and reactions in those comments below.