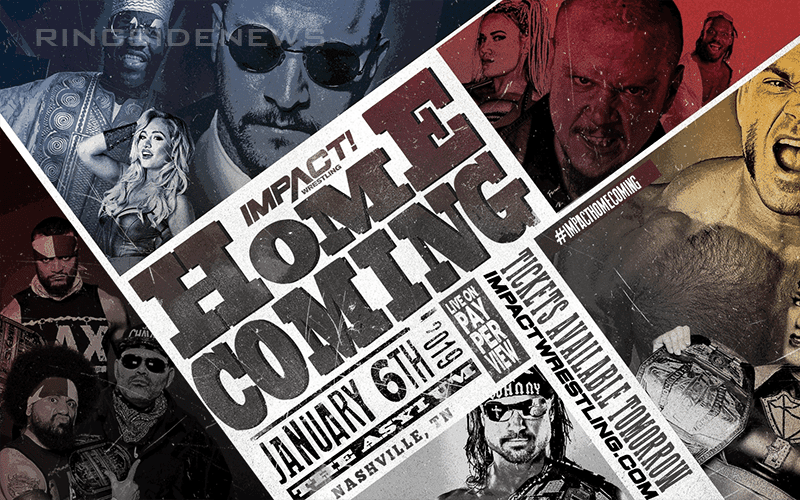 It’s time for Impact Wrestling’s Homecoming. Thank you so much for joining us at Ringside News for the results. If the show is still going on, keep checking back and we’ll keep this thing updated.

Impact Wrestling is moving to Fridays at 10:00 pm on The Pursuit Channel. This will mean a much smaller audience, but they have a pretty impressive card booked for the evening.

It should be a fun night and here’s the card:

Allie and Su Yung vs. Kiera Hogan and Jordynne Grace

The show kicks off at 8:00 PM EST and the live coverage will start after then!

This match started off with everyone climbing up and trying for the title. Everyone fell off and then Ethan Page hit a rana on Swann on his way down. Then they paired up and continues the action.

Page threw Trey off the top turnbuckle onto Jake and Rich on the floor. Soon they were all back in the ring hitting kicks all around. Trey closed the sequence off with a on Crist.

That got a big “Impact Wrestling” chant from the crowd.

The action continued and Jake Crist hit a top rope double cutter on Swann and Trey. Then Swann kicked Page off of the title and he took a bump to the canvas. They wrestled a bit more and Swann hit a springboard cutter on Page.

Ethan pulled Trey off the wire and hit a backbreaker before climbing up to fight Crist on the turnbuckle before taking a bump and a legdrop off the top rope.

Trey hit a rana to the floor on Page followed by a swinging DDT from Crist to Trey and then Swann hit a dive to take everyone out.

The match continued and featured an innovative tower of doom. Crist was able to get everyone else down and then carried Swann as far away from the ring as possible before climbing up and getting on the wire. Then Ethan Page speared him off of the X.

Trey tried to pull himself into the match next, but Swann came back and hit a off the top rope. Trey tried one of his own, but Rich landed on his feet and climbed up to capture the title and become the new X Division Champion.

Allie and Su Yung vs. Kiera Hogan and Jordynne Grace

Allie was really living up the dark gimmick her character has become since being taken over by Su Yung. The heels worked well against the babyfaces and stalled a little bit before a little action and then they stalled again.

Grace went outside and tried to get to Allie, but the referee stopped her because she wasn’t the legal woman in the match. Then Su took Hogan down from the top rope and Grace still couldn’t get in the match.

Yung hit a hanging reverse before getting a two count. Then she tagged in Allie. Hogan took a lot of punishment.

Finally, Hogan took Su down and then Grace got the hot tag at the same time as Allie. Jordynne took Allie out of the ring and then Su took Grace to the outside. Hogan nailed a suicide dive on Allie and Su went for one on Grace, but she blocked it and got Su in a suplex while Hogan hit a crossbody from the apron to the floor on Yung.

Grace held Allie and powebombed Su while giving Allie a powerslam. The place chanted, “Jordynne,” but she only got a two count. Then Allie hit a codebreaker on Hogan and called for a bloody glove from Su Sung before hitting a mandible claw on Hogan. That was it.

After the match was over, Su beat Hogan down a bit more. The Undead Bridesmaids came with a coffin and they were going to put Hogan inside. Suddenly, Rosemary popped out of the casket and fought off the Bridesmaids before going after Su. Rosemary threw Su Yung into the Bridesmaids. Rosemary crawled into the ring and up to Allie, so Allie took off.