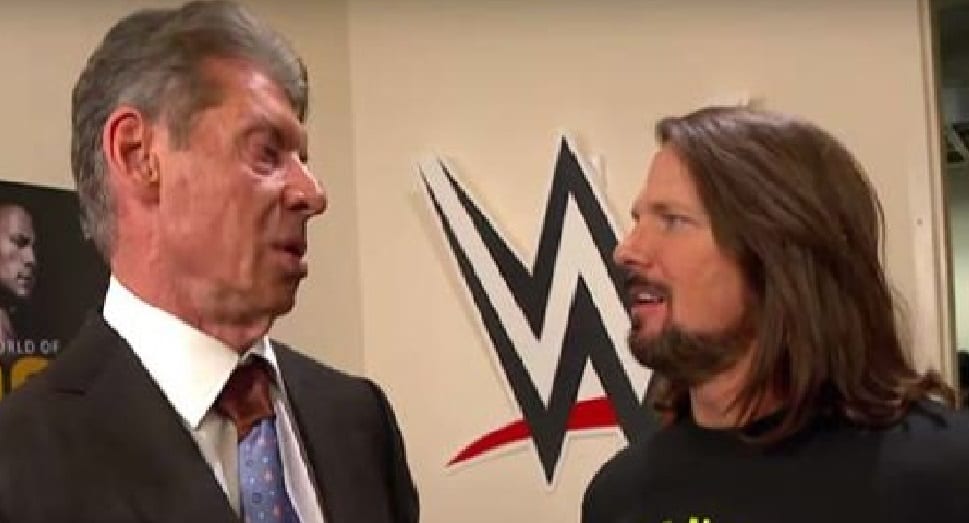 Vince McMahon has his own creative process. This is why he’s booking himself to get punched at 73-years-old. He recently took a shot from AJ Styles and this could be a big push for AJ.

Apparently, it wasn’t always the case for Styles that he would be getting a McMahon rub.

During a recent interview with Fightful, Jimmy Jacobs discussed how Vince McMahon initially reacted to AJ Styles in WWE. He wanted to know what kind of character Styles was instead of what he could do.

McMahon also apparently wanted AJ Styles vs Roman Reigns which was an idea he obviously changed his mind about years later.

“When AJ Styles came into WWE, Vince McMahon was skeptical of him for every reason you might think. He came in at Royal Rumble, got a great reaction when he came in and Vince was still skeptical and said ‘well that’s just one audience.’ Can he talk? What’s his character?”

“Does anybody know who he is? All the reasons you would think. But it was Vince McMahon’s idea to have AJ work with Roman Reigns a few months later. We had all pitched our ideas and figured you’d want to give him a strong heel.”

“The strong heels we had at that point were Chris Jericho and Kevin Owens, and Vince was like ‘we’re going with AJ Styles.’ You have to give the devil his due in those moments.”

In regards to what it’s like to be in the writer’s room in WWE, there doesn’t seem to be any way of keeping everyone happy. This is especially true when it comes to keeping the audience happy as well.

“When you’re talking about fans, it’s not a monolith. When you’re in the room, producers, agents, we can’t agree. The idea that the millions of WWE fans have this singular voice, it’s kind of a fallacy.”

“How do we measure that voice? Is it in-arena reaction? Maybe. Supporting WWE at a live event is the most expensive way to do it. Those are the hard fans. Can you say something about merchandise sales? Perhaps. Response the internet? Yeah, there’s that, too.”

“There’s the mysterious, mythical casual fan. The lapsed fan. The fan that we’re trying to get beyond the barrier from the people who go to the shows. What do these people theoretically, conceivably, maybe like?”

Maybe Vince McMahon and WWE will be able to figure out that perfect recipe of making everything work. In the meantime, we at least have an on-going storyline where AJ Styles punched out Vince McMahon, so that’s fun.