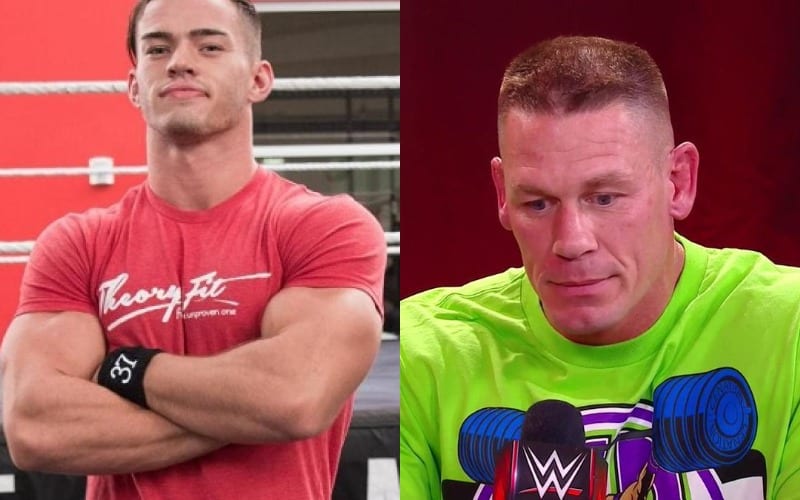 John Cena doesn’t wrestle very often because he’s in Hollywood and that schedule and all of the responsibilities there don’t really give him time at all for something like wrestling. He just had one of the most promising young professional wrestling stars around call him out. Let’s see if that changes things.

Austin Theory is the current EVOLVE Champion and won his title by defeating a WWE NXT Superstar. He’s ready for more big challenges and he laid one down for John Cena himself.

During the recap for EVOLVE 118, Austin Theory showed up with the EVOLVE Title over his shoulder. At this moment, Theory is holding the EVOLVE Championship, but he could be a huge star in this business. At 22-years-old, he has his eyes set for NXT already.

Theory cut a promo and only had time for one question because they’re on “the champ’s time now.” He dismissed the question about his current EVOLVE storyline and then took the interview in a whole new direction.

“How about a question that’s on everyone’s mind and that’s who is going to challenge me for the EVOLVE Championship in 2019? Nobody. How long am I going to have this title? Until the day I walk into TakeOver. John Cena, I heard you were trying to pass the torch… well, you know how to get in contact with me.”

Theory walked away without needing to say anything else. If Cena sees this promo, it’s not likely it will get him to make a return because he can’t wrestle anymore when he’s in the production of a movie and usually in production on something.

We’re pretty impressed by Austin Theory’s promo though. He was a standout at a WWE tryout in September as well. Let’s pay attention to him because he could be making a jump from EVOLVE to NXT very soon as he heavily teased.