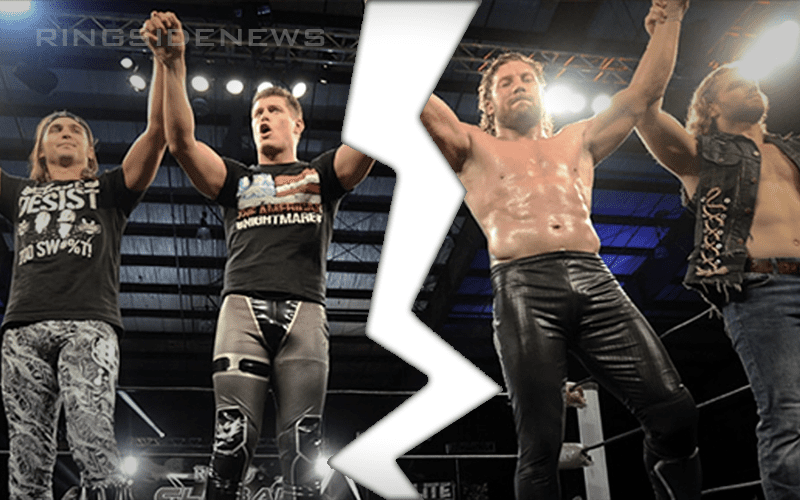 Cody Rhodes, The Young Bucks, Kenny Omega, and Adam Page make up The Elite. Marty Scurll is a part of the crew as well, but his contract extends longer than the rest of them. Therefore, he won’t be a free agent until much later. They still made a promise to stick together, however, that might not be the case

Rhodes admitted during a recent interview with Mirror Sport that there is a possibility that The Elite might be splitting up in spite of what was previously said.

“Yeah I know and it’s one of those things where it’s nice to let it play out. Any time fans ask me what do you guys think is next, what’s the plan, I typically tell them to watch Being The Elite. I know Being The Elite has so much comedy in it and there’s many goofy elements, but it also has… the thread is in there of where we’ll be going and what we’ll be doing.”

“But the truth really is, these two months December and January, are really a minefield of just political and difficult decisions for everybody. You know, obviously, we would love to stick together, we have this chemistry amongst each other, this friendship and a competitive nature amongst each other, we would love to stay together, but who knows?”

“There is a world where that may not happen.”Cody stated. “Either way, if All In was just one night, it was the best night of my life, for sure. It was a wonderful thing. If it ends up being more, then I think that’s a great thing for the fans. But the best thing I can tell you is stay tuned and hang in there with us, because believe me, we don’t have all the answers yet either.”

Apparently, there is a world in which The Elite isn’t going to stick together. It will be very interesting to see what happens next, but you never know if WWE could offer some huge money that would be impossible to turn down in the meantime. Of course, Cody Rhodes already said that he turned down WWE’s offer weeks ago.

The pro wrestling landscape is certainly changing, therefore, we will just have to wait and see.