WWE has plenty of couples in the company. After all, sometimes when you’re in a business like pro wrestling it really helps to be in a relationship with someone who understands how to train and the demands of the business.

Ricochet was romantically involved with Tessa Blanchard for a good amount of time and the couple even had t-shirts made together as the King and Queen, but that relationship is no more. Now Blanchard has moved on and it looks like so has Ricochet.

We’ve heard rumors about Ricochet and Kacy Catanzaro dating for a while, but this only confirms it. Catanzaro from Amerian Ninja Warrior fame was a standout in the second season of the Mae Young Classic and is incredibly over at NXT live events for her innovative style.

Ricochet and Casey have been seen at live events in mixed tags and they obviously get along. But now it appears the couple isn’t hiding much anymore.

We’ve received word from some fans for a while and we didn’t want to break anything unless we knew it was true. But Ricochet’s recent Instagram story was the final piece of evidence we needed. Our best wishes go out to the happy couple. 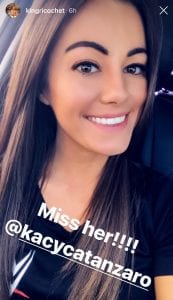 My pick to win the #maeyoungclassic! Don’t let her size fool you!! She came to win! #MightyKacy #DynamiteGal

WWE NXT Loading Up Next Two Weeks On USA Network

WWE Superstars Making Sure Nobody Leaves Before Them In Saudi Arabia…

The Undertaker At WWE Performance Center Ahead Of WrestleMania