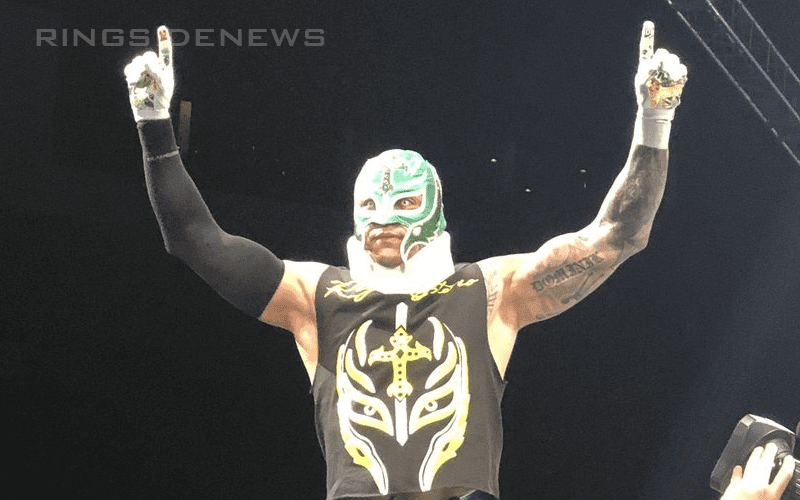 Rey Mysterio returned to WWE just recently and hasn’t really had many high profile opportunities to show what the can do. He lost in the World Cup Tournament and failed to make it the entire way for the blue team at Survivor Series, and a post-match assault from Randy Orton last week on SmackDown left him beaten down and maskless.

If you’d like our full Starrcade spoilers, you can get those here.

So when Mysterio showed up to the Starrcade event in Cincinnati, fans were a bit shocked to see Mr 6-1-9 sporting a neck brace. This could be signs of a legit injury, but it would always be playing up the attack from Randy Orton, hopefully, Mysterio is just playing up the storyline attack from The Viper.

During his segment at Starrcade, Mysterio and Shinsuke Nakamura took part in a Miz TV segment and then Nakamura beat down Mysterio which caused a referee to run down and start the match with Nakamura fully in control.

Nakamura ended up losing via DQ after The Miz interfered and then Rusev ran down for the save and set up at tag team match. After all was said and done, the babyface team of Mysterio and Rusev won.

Odds are since Mysterio competed at Starrcade he’s okay. After all, WWE won’t allow their talents to work injured at all, let alone if they need a neck brace. But Mysterio wearing a neck brace to the ring sure shows off the fact that they’re trying to keep the continuity from the weekly television product.