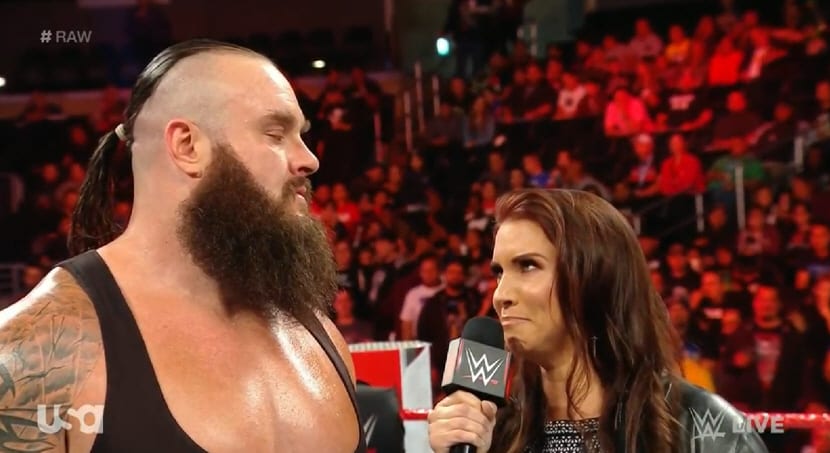 WWE TLC is the next pay-per-view on the calendar and it looks like they’re getting to booking the card quickly. On the night after Survivor Series, they added another big match that could go on to change a lot of WWE’s storylines going forward.

Stephanie McMahon came out and she was happy about Raw’s Survivor Series performance. She said that she doesn’t “lie, cheat, or steal” like her brother, Shane McMahon intentionally using Eddie Guerrero’s phrase at the same time no doubt.,

Baron Corbin came down and wanted to take Steph up on her deal. After all, they struck up a bargain at Survivor Series that if Raw swept, then he’ll get to be the full-time Raw GM.

Suddenly, Braun Strowman walked down and he demanded a few things from Steph as well. Because she had promised Strowman a match against Baron Corbin, she granted one at TLC — but there is a catch!

If Baron Corbin wins the match at TLC, then he will get the gig as full-time Raw General Manager, but if Braun Strowman wins, then he will get his Universal Title match against Brock Lesnar at the Royal Rumble.

Since Braun Strowman also got to pick the stipulation for their match, he picked a TLC match since Stephanie McMahon said she checked with the legal department and they ruled out dismemberment which is another crazy piece of verbiage to use considering that whole Saudi Arabia fiasco.

It looks like if you’re doing the math, Baron Corbin is probably going to just be a full-time Superstar after December 16th at TLC because Braun is going to make sure that he knows it’s “Monday Night Braun” (which was something he actually said.)