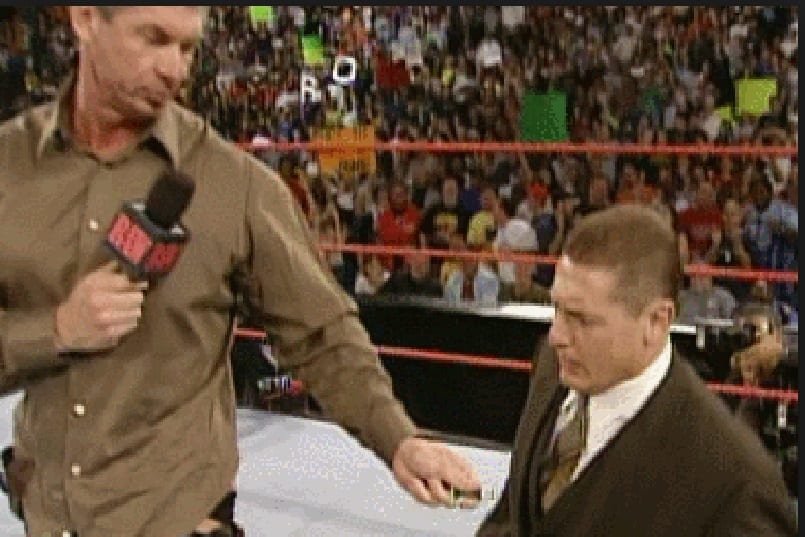 William Regal’s career in pro wrestling is extensive and he’s a man who has been forced to battle demons pretty much his entire life. But he probably never expected he would be kissing Vince McMahon’s bare backside the first time he laced up his boots.

Bruce Prichard discussed the famous segment where William Regal kissed McMahon’s butt for real during a recent episode of Something To Wrestle With. Vince McMahon initially wanted to swerve the audience and turn around to hug Regal to show that it was all a ruse — but the future NXT General Manager would have none of that.

“It wasn’t ‘You know well…’ It was: ‘I love it!’ And when Vince [McMahon] came up to him and goes, ‘Well, do we do a swerve where we don’t and we actually hug?’ [Regal] was like, ‘No! I should kiss your ass. I should actually kiss your ass. Pull your pants down and I kiss your ass!'”

“Because he knew that was, for a heel, there’s no more heat than that than to kiss the boss’ ass. So masterfully done and I credit Regal for doing it the way that it should have been done.”

William Regal was able to use his ability in the ring and mind for the business to get a job with WWE which he still holds today. Plenty of WWE Superstars owe their careers to Regal noticing them on the indies and many more will be to come as he continues plucking top starts out of the world’s indie wrestling scene.

Regal knew the kind of heat that kissing Vince’s backside would bring to his character, after all, nobody likes a kiss-up. So McMahon handed him some Chap Stik and Regal got to smooching. But Regal’s bright future with WWE might have never happened if William Regal hadn’t been totally game to get real with a segment where he was scripted to lay a big kiss on Vince McMahon’s buttocks.