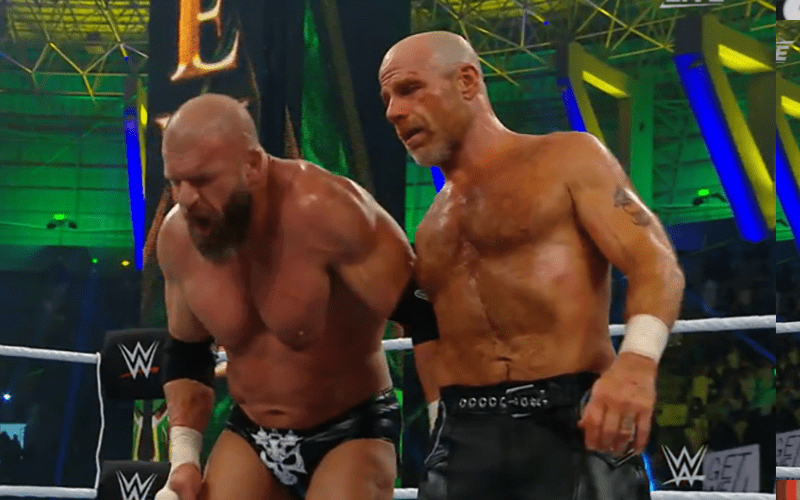 Triple H was involved in a brutal contest at WWE Crown Jewel as he teamed up with Shawn Michaels once again to reform DX and face The Undertaker and Kane. DX vs The Brothers Of Destruction was the main event of the big Saudi Arabia showcase and there was no shortage of gimmicks during the match.

At one point, Triple H was sent through a table by a chokeslam from Kane. Michael Cole said Triple H was hurt and being tended to by the medical staff at ringside as Shawn Michaels fought off both Taker and Kane by himself. Then Triple H appeared on the apron once again to take a hot tag and they went on with the match’s finish.

Some fans might have thought that this meant that Triple H’s injury was a work and all part of the match but sadly, that is not the case. WWE issued a release after the Crown Jewel event’s conclusion where they not only confirmed Triple H is injured, but he’s going home early and undergoing surgery.

“During the epic showdown between D-Generation X and The Brothers Of Destruction at WWE Crown Jewel, Triple H sustained what appears to be a torn pectoral muscle, WWE.com has learned.”

“As a result, The Game plans to return to the United States this week to undergo surgical repair.”

Hopefully, this won’t keep him out of action for long — but he hardly ever wrestles anyway. However, WrestleMania is right around the corner but he still has 5 months to recuperate. Either way, it’s still impressive that Triple H was able to get back up and carry on to see the match to a conclusion where DX was able to defeat The Brothers Of Destruction at WWE Crown Jewel.