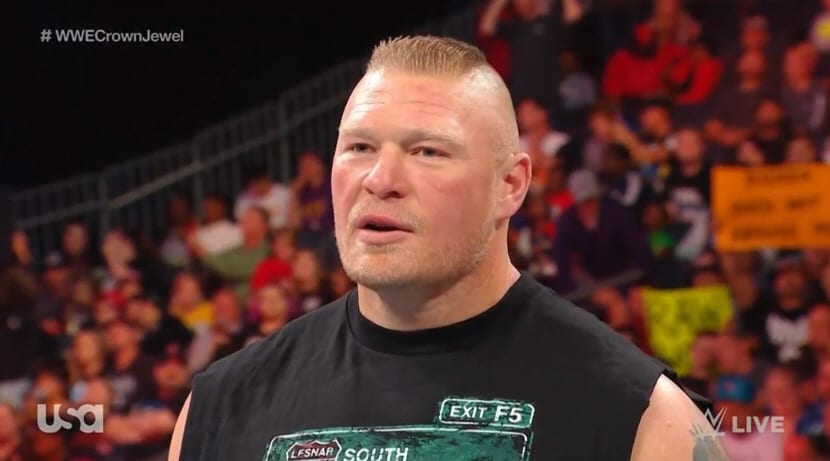 Brock Lesnar showed up on Raw this week but he didn’t say anything. But that’s nothing new for Lesnar because he usually lets his Advocate Paul Heyman do the talking and lets his actions speak louder than words. However, Lesnar didn’t do any kind of action either unless you count grinning from ear-to-ear while Braun Strowman nailed 2 running powerslams on Baron Corbin.

Roman Reigns’ announcement that he is taking a leave of absence from WWE to focus on his health was shocking to the entire WWE Universe and it obviously changed many plans around.

We’ve heard talk that Lesnar’s appearance on Raw this week was arranged after Reigns’ announcement and the decision that the WWE Crown Jewel Universal Title match will be a singles match.

With Reigns in the plans to help build the event, a call to Lesnar was made which might also be why he wore a shirt without the Charlotte North Carolina name on it as his appearances are also accompanied by a custom t-shirt. The t-shirt design he wore on Raw this week is one they’ve been using for years and have since stopped marketing, in fact, it is currently in the clearence section of WWE’s official shop and there are only large sizes left.

Being told Lesnar’s booking was a late planned thing. Obviously Roman was planned to be there to hype the #WWECrownJewel match but he sadly couldn’t be there. They didn’t even make up a new Charlotte t-shirt as is the custom so he wore an old design. #RAW pic.twitter.com/JaXBOU728Y