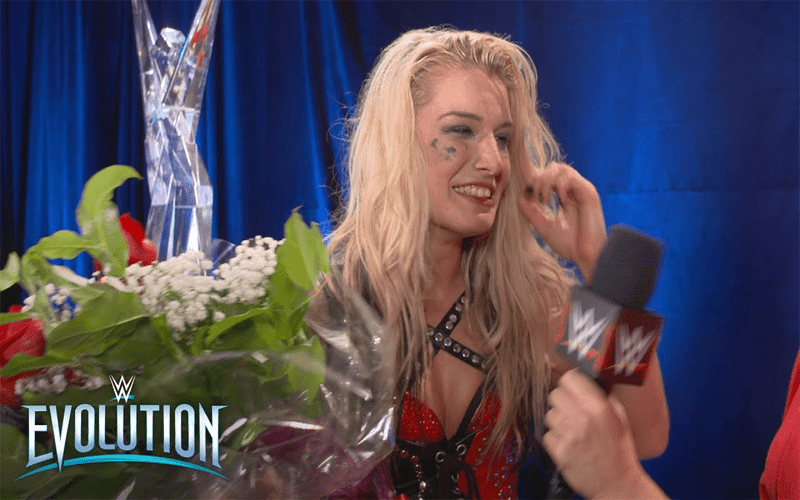 While celebrating backstage, Storm was approached for an interview with WWE, where the NXT UK wrestler gave an insight into what the victory means for her and what her goals moving forward are, now that she is the second victor of the tournament.

When asked what the victory over Shirai in the final match of the tournament means to her, Storm was humbled, explaining that this victory is a dream come true.

“To be honest, I have no idea what my life is right now. I don’t know what’s happening. But all I know is my dream is coming true and I’m on this incredible show with all the people that inspired me to do this, and I just won [the] 2018 Mae Young Classic, and that has been my goal for so long. It’s all just completely surreal to me right now. I don’t know what my life is.”

Just as Storm was inspired by numerous other talent featured on the show, she is likely to have inspired the next generation of female competitors with her victory at Evolution. When asked to comment on that, Storm was almost adamant that this was just a dream, but she will enjoy the moment.

“Oh my- it’s just so crazy. Tomorrow I’m gonna wake up and this is all just gonna be a dream, I’m sure. But right now, I’m just gonna enjoy this moment, because this is- this my dream and I’m living it.”

Finally, Storm is asked what her goal is moving forward, given that she achieved her previous goal of being victorious in this year’s Mae Young Classic.

“Well, for a while now it’s been my goal to become the new NXT UK Women’s Champion. And, well, now that I’ve just won the Mae Young Classic I feel like I can take it one step further and do that.”

Check out the clip below:

Do you believe Storm will be the next NXT UK Champion? Was she the right decision as the victor for the Mae Young Classic, in your mind? Let us know your thoughts, opinions, and reactions in those comments below.